Tonight I wish to propose a toast, to each and every parent-of-small-children who survived today. Especially those who still have at least one child in diapers.

The joke’s on us

As I write this, the full moon is still a few days away according to my calendar, but the date is yet April 1 for a few more hours: April Fools’ Day. According to some cosmic joke orchestrated by the universe in which I live, it was apparently a day from hell for many of the other parents of young children I know.

At least, that’s what I learned from comparing notes earlier this evening, when our kids gathered for their last  church choir rehearsal before Easter Sunday.

Moreover, it seems that today was just the midpoint in a week that has been far from domestic bliss for many of our families.

None of us shared any details; it was just enough for each of us to know that we hadn’t been the only ones trying to navigate the week and our children’s vicissitudes in a leaky life raft.

Time after time today – sometimes from polite custom, sometimes in an effort to know if her own private chaos was unique – someone asked me, “How are you today?” or “How are you doing?” The best reply I could come up with was “Same poop, different day.”

I can only imagine how often a more colorful version of this phrase gets uttered on a daily basis (it would abbreviate not as SPDD but SSDD).

But somehow, when you’re a parent who still has to change diapers, it seems as if the only people who truly have a right to use any version of this phrase are sanitation workers, paid dog walkers, childcare professionals, and parents of children who aren’t yet fully toilet-trained.

And I suspect that the former two categories are more likely to be in a position to use the expression’s more colorful variant whenever they want.

There was an April Fools’ Day piece on the radio this morning about driverless cars that had been programmed (or perhaps just learned – the farcical news segment was never clear) to utter verbal expressions of road rage at the incompetence of other cars’ human drivers.

Instead of investing time and brain cells inventing cars that drive themselves, why oh why doesn’t some robotics genius figure out how to automate the process of changing our offspring’s soiled nappies?

Will we really miss this?

Our minds have a funny way of romanticizing the past, of looking back through a rose-colored haze at the good parts of difficult experiences without remembering all the pain in such exquisite detail. (Think about all that Tom Brokaw-fueled nostalgia for the lives lived by the “greatest generation,” or consider anyone who spends their weekends and disposable income reenacting battles of the Civil War.)

Maybe this is why grandparents can take so much joy in their children’s offspring, or why anyone who’s gone through a difficult pregnancy or labor would even consider another pregnancy, knowing the risks.

Hence, those of us past the initial months and years of infant-driven parental sleep deprivation can coo at others’ newborns. And blissfully, perhaps with misty eyes, remember the sweet smell of a new baby – as we urge the bleary-eyed progenitors of said baby to cherish every moment. (If you’ve never been a parent, it’s a fact: the poop of babies who haven’t yet started solids really does smell sweeter than their table-food-eating counterparts’ excrement.)

I don’t know what sort of straws broke over the camels’ backs of my fellow choir mamas earlier today. I gather that at least one other mother had experienced, at some point in her week, moodiness from a daughter barely of school age that was enough to make her fear what the hormonal surges of puberty will be like. (That would be my day twenty-four hours ago, as my elder daughter inexplicably burst into tears every 30-60 minutes all afternoon, most of the time without being able to say the first thing about what was wrong.)

Given that there was food present this evening, I didn’t dare share the details of my own last straw this morning.

My own last straw

At three years of age, Essie has now been working on toilet-training for over half her life. This effort was until recently an entirely Essie-driven phenomenon. We even gave up cloth diapering her during the daytime some months ago, in favor of “pull-up” style disposable diapers, hoping that the ability to pull them up and down independently would encourage her to continue making forward progress in this department. (It hasn’t.)

I remember once, when out to lunch with the girls at Costco, I was mortified at the end of our meal when the woman at the next table leaned over and informed me that one of my children literally had poop spilling out over the back waistband of her pants.

Well, this morning, a certain child who’s not yet fully trained in my family informed me toward the end of consuming breakfast that I had to change her diaper, now, because she had just pooped in it.

We were already behind schedule in our efforts to get preschoolers off to preschool for the day, and said child had her arms extended to me, so I did what seemed the natural thing to do: I reached down and scooped her up in my arms. As she ran her hands over the back of my sweatshirt, before entwining them around my neck underneath my crown of freshly-washed hair, I realized that there was poop spilling out of the back of her pajama pants.

Flashback to that day at Costco: a stranger has just informed me of what she can see by looking at my child from the back, and with a sinking feeling I realize that I may have noticed something not-quite-pizza-like on said child’s hands once or twice during the meal, as I was helping her to wipe her hands with her napkin.

Imagine hearing a story about bugs crawling all over someone, and then finding yourself unable to shake the feeling for the rest of the day that you’re covered in tiny insects on the move.

Even though an inspection this morning of the child-in-question’s hands suggested nothing was amiss, and the other child assured me that she didn’t see any brown-tinged smears on either my neck or the back of my gray hoodie, I have remained mentally stuck ever since in that terrifying moment, made worse by the realization that I didn’t have time to take another shower.

That horrific sensation has clung to me all day, serving as the capstone of my week to date. It was no surprise then, when I tried to cheer myself up midmorning with a homemade café viennois – figuring that it would be a more appropriate choice at 10am than a glass of white wine – to realize that we were out of whipped cream.

Nor was I surprised when every stoplight I hit on the way to preschool pickup was red, meaning I was late to pickup time – a transgression punishable by steep fines, according to the preschool parents’ handbook.

Sure, I should have left home sooner. But silly me, I had stopped at the grocery store on the way to buy more diapers – something I’ve been putting off doing – with a rain check I’d picked up a few weeks ago, when they were out of the size pull-up we needed. And then I had the nerve, despite the precious minutes it wasted, to point out to the cashier that she hadn’t entered the full coupon value of the rain check into my order.

Having to buy more diapers was enough of an indignity already. But the thought of being overcharged for them was even worse, in my own inner child’s mental map of all that was unfair in this week to date. 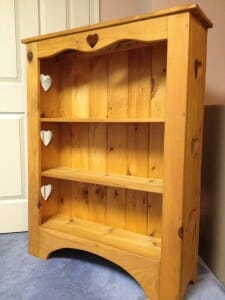 Someday very soon, I will at last be able to disassemble the bare-bones changing station in our living room, or so I keep telling myself. By the end of this calendar year, we will at last be able to trade the full-scale version in our younger child’s bedroom for the beautiful hand-carved heart-motif bookcase I bought her a few months ago, which is currently taking up space in our basement instead.

But until then, here’s a memo from a mama still in the trenches to all those parents out there with their rose-colored glasses on, and especially to all those in life who’ve yet to change the diaper of their firstborn, let alone freshen that of their lastborn offspring one time too many:

Enjoy your amnesia, or your blissful ignorance if you’ve never been a parent.

And be careful the next time you are tempted to describe your workday with a phrase akin to “Same poop, different day.” 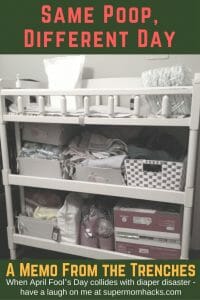 4 thoughts on “Same Poop, Different Day: A Memo From The Trenches”