Kimmie spent most of last week home from school with a fever. Although her appetite for food was way down, and her appetite for sleep was way up, she was otherwise her happy, normal self. So afternoons involved lots of napping and movies, and mornings when Essie was in school quickly became lots of bonding time with Mama, over jigsaw puzzles in the living room.

As we sat there puzzle-making one morning, something dawned on me: Except for the puzzle in progress, the living room was relatively tidy. Moreover, it has stayed relatively tidy for the past three months now! – ever since our massive hoeing-out and rearranging-with-the-girls’-input in the weeks before Christmas. 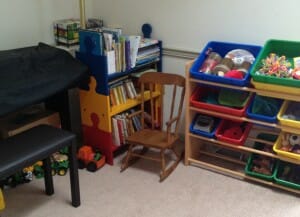 Yes, the toys and puzzles and books come out on a daily basis. But with a more limited selection in the first place, more buy-in from the girls on where things should be stored, and the very real threat that Mama will confiscate anything not put away at cleanup time, it seems that the living room’s general state is now “decent-looking,” rather than “toy-store-hit-by-a-tornado.”

(If you’ve got kiddos under two around your house, don’t beat yourself up as you read this post. I also think that having one who’s now five and one who’s almost three – both of whom have months if not years of preschool training under their belts, to reinforce my efforts at home to get them to clean up after themselves – has a lot to do with our living-room miracle.)

As we worked, I asked Kimmie what she thought of the living room, and if she was still as excited about “how nice it looks” as she was back in December. That query generated a resounding “yes!”

“Why do you think it’s stayed so neat, and it’s so much easier for you and Essie to keep your things tidy now?” I asked her.

Without hesitation, she answered, “Because we don’t have so many toys to keep track of!”

Fast-forward to this past weekend’s houseguests. I must confess, I’ve been known to use people’s pending arrival as an excuse to get major house projects done. I work well on deadlines, and nothing can spur me to action like the knowledge that I’m up against one, even if self-imposed.

For example, a planned visit from my mother in February spurred me to continue our streamlining efforts begun in December, and my related New Year’s goal of mindful downsizing (a.k.a. renewed efforts to declutter our home and lives). By the time she came, the play yard that had lived in our dining room for nearly five years (and had remained unused since sometime last year) was finally gone.

And a lunch invite to a friend a few weeks ago served as my deadline to excavate our dining room from boxes. Some of the boxes had resided there since I started filling them last December, with stuff to go to Goodwill. But some of them had been living there since last May, when I spent a month cleaning out our garage.  Those boxes were full of items that we hadn’t yet unpacked since moving into our new house, over five years ago. (At least it was pretty easy to go through them and realize that if we haven’t missed their contents for this long, then they were all things we can probably live without.)

Back to last weekend: Kimmie recovered from her mystery fever just in time for an impromptu visit from my in-laws, who ended up staying for five days. Usually, I like to have as much notice as possible that we’re having house guests – partly because I’m a plan-ahead kind of gal, but mostly because I need enough advance warning to excavate the house from the rubble of our day-to-day existence.

But this time, I didn’t have as much time to prepare for their arrival. As a result, I only started to “clean” for their visit – make up the spare bed (which is usually the couch where the girls watch movies), clean out the laundry room (which doubles as our guest bathroom), straighten up the living room, sweep the floors, and tidy the kitchen counters – hours before they arrived.

Here’s the thing, though: I really didn’t need more than a morning and afternoon to pick up the house!

Granted, over the past few months I’ve taught the girls how to clean bathrooms. So Kimmie is now expert at washing off surfaces and emptying the trash, while Essie insists on doing her share by sweeping the floor and putting away excess reading material. And they’re also more into the notion of sweeping and picking up the kitchen floor than ever before – which is good, since most of the mess originates under their eating spaces and their play table. 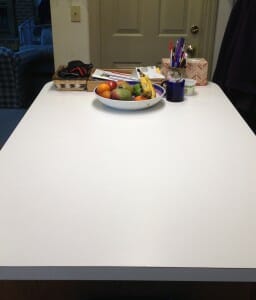 But I also realized that the countertops I gave a serious overhaul back in December-early January are mostly staying tidy and clear! Hence I had a big head start on prepping for our guests’ arrival. My in-laws are fond of their coffee and toast, so their visit always includes a coffee station and a basket of assorted breads on the counter. But in order to make this happen, I didn’t need to start from scratch by clearing weeks’ worth of rubble off the countertops first!

To give credit where credit is due, I’m not alone in this effort. My dear husband has made a concerted effort at containing his clutter to the basket and mail bin I designated for him. And as I noted before, the girls are getting better at keeping toys where they belong when not in use, or promptly returning them to their homes on request.

At last, I’m finally feeling as if we’re making headway in the ongoing war against clutter – and as if we’re all in this together, rather than my waging a solo uphill battle.

Now if I can only get my office, a.k.a. the dumping ground for everything I don’t have time to deal with and everything I’m working on that is “in progress” (like toys I don’t want the girls to rediscover before I’ve moved them on to a new home), to a similar state of habitual neatness.