Even though the first week of December was rainy and dreary in our neck of the woods, the girls and I have had a super start to our month. Part of the credit goes to the fact that I’ve made some very conscious decisions to simplify our lives, both for the holiday season and beyond. 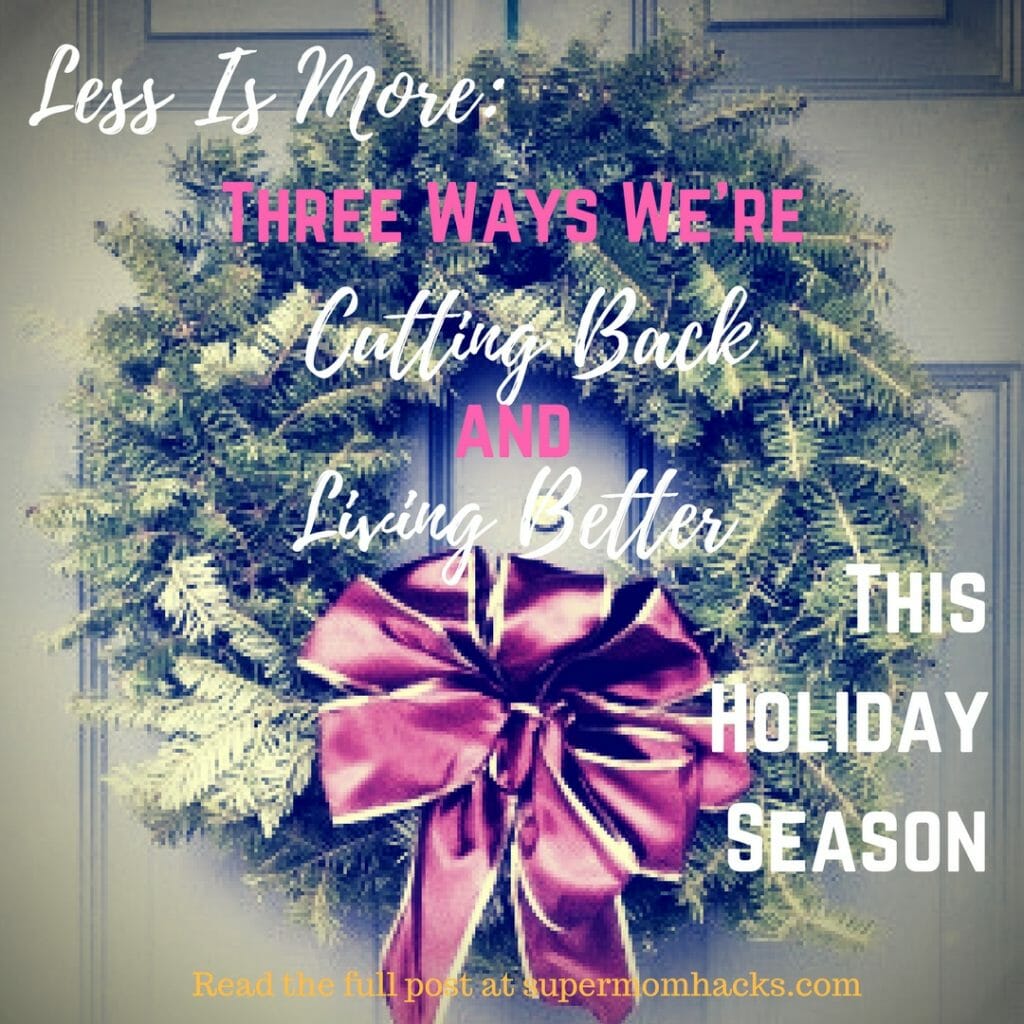 We’re not talking radical changes – just tiny steps toward cutting back that I’ve taken, after a lot of thought – steps that are already helping us live better.

1) Edit out the old to make way for the new

As I’ve written before, every few months it’s a good idea to reevaluate what’s no longer working – whether it’s having a changing table in every room of the house, or hanging onto a wardrobe from a lifestyle you no longer live – and adjust accordingly.

This holiday season, I’ve applied that principle with a vengeance to the girls’ toy stash in the living room.

So far, they haven’t noticed a thing that has quietly gone away. Bonus: with fewer toys around to mess the place up, it’s a lot easier to get them to clean up the ones they have left, right after they use them.

Even better still: One day early in this process, when I hadn’t quite finished “editing,” a few of the things I’d meant to put away the night before were all over the floor again the next day – toys they often take out of the toy bins, but don’t actually play with anymore. I told them that anything they didn’t clean up would become mine, permanently.

After a few such public confiscations of the things I’d meant to eliminate anyway, they now know I mean business when I say it’s time to clean up – to the point that Kimmie has now taken over both urging Essie on, and picking up whatever Essie doesn’t.

Lest you think I’m being cruel and heartless, I’ve also spent time recently cutting back on my own stuff in our house. Specifically, I’ve been going through things that have remained largely untouched since we last moved five years ago, before Kimmie was even born.

In the process, I’ve piled up boxes’ worth of clothing I’ll never wear again, knickknacks we don’t really need, and other stuff we can do without:

2) Focus on what really makes sense for your family

December is already a busy month, between school concerts and holiday parties and celebrations with loved ones. This year, I’ve made a deliberate effort to reduce our family’s stress levels, by cutting back on time commitments in some areas so we have more time for the things that matter.

For example: This year, for the first time since I was pregnant with Kimmie, we are traveling to visit all three living grandparents over Christmas, for a total of approximately 1000 miles in my car over a week and a half. Not hosting Christmas at our house for grandparents, aunts, and uncles means I’ve decided to cut way back on the decorating this year. Instead, I’m focusing instead on the editing efforts I mentioned above.

Don’t get me wrong – we all love the decorations, and will miss them. But with the whole house torn up, between our efforts to eliminate excess clutter and the aftermath of some recent window repairs, getting out all of our usual decorations just doesn’t make sense.

Likewise, being out of town for Christmas means the girls won’t be here for their one church choir performance this month, singing at the Christmas Eve service. So, much as they look forward to the weekly practices, we’re taking a break from choir in order to focus on more family time at home. And since many of my church meetings coincide with their rehearsals, I’m skipping a few of those this month, too, so we can spend more time together as a family.

3) Stay focused on what they’ll remember

“You know what my favorite Christmas gift was last year, Mama?” Kimmie said out of the blue a few days ago. “No, what?” I responded, thinking, Aha! – a great insight is coming, I just know it! “The roll of Scotch tape you gave me!”

You read that right: A ROLL OF SCOTCH TAPE. I’d put a partial roll in her stocking, labeled with her name, for her to use however she wanted. Why? Because I was sick of her snitching the rolls I keep on each floor for “grownup uses” and pulling all the tape out, so there was never any handy when I needed some. As my husband observed with a laugh when I told him the story later, “Guess that takes some of the pressure off for our Christmas shopping!”

As a rule, we don’t give our kids “big-ticket-item” gifts for Christmas, or their birthday. Partly, it’s not the most budget-friendly thing; partly, we wouldn’t do that even if money were no object. One of the cardinal rules of living a clutter-free life is keeping excess stuff from entering your house in the first place.

So even more than usual this year, rather than investing resources in what’s under the tree for the girls, I’m trying to focus on making the most of how I spend my time with them. Partly to help them to grow into the responsible adults I hope they’ll become someday, but mostly to build the kind of memories that will last a lifetime – longer than any toy would.

The “bigger picture” approach in action:

For example, one of my usual “blog work” days took a backseat last Tuesday when Kimmie had to stay home from school, on the tail end of a stomach bug. Since missing school was due to the school’s 24-hour-rule on certain types of illness (rather than to her still actually being sick that morning), instead of working at home that morning, Kimmie and I went out to run errands.

Boring, right? Only I made a big deal of hyping it as our “special Mama-and-Kimmie” morning out, telling her she was getting a secret inside peek at the running around I get to do sometimes while she and Essie are in school. She got a real kick out of literally running to keep up with me as I dashed through department stores, and of flying around in the grocery-store shopping cart as I ran through the aisles, grabbing the few things we needed before Essie’s school day ended.

While we were out, she helped me pick out the final decorative touches for the Christmas stocking I’m making for Essie, and we shopped for a few other Christmas presents. We also did some comparison shopping on the broken part in my car’s stereo system – namely, the part that allows the girls to listen to CDs all the way to grandparents’ houses on our long road trips, not to mention on the way to and from school each day.

This one-on-one shopping time became a great opportunity to have some serious conversations about money: Everything costs money, our supply of money has its limits, and spending money on some things means less money for other things. This is why we try to buy things on sale at the grocery store, for example; this is also one reason we try to make gifts for people whenever possible.

And furthermore, if my car’s CD player gets fixed before Christmas, then that expenditure will count as a major Christmas gift to her and Essie.

Not only did Kimmie seem to grasp this concept, but she was an avid participant in the comparison-shopping process – to the point of explaining to salespeople exactly which part we needed to replace, and why it mattered to her personally that we replace it. Her input was important to the process, and she knew it.

4) The payoff for cutting back? Lessons for life

Each of these small adjustments will, I hope, continue into something bigger in the new year. I’m already feeling as if a huge weight of excess baggage has lifted from our lives, thanks to the excess stuff I am liberating from our house. Likewise, having cut back on some of my own commitments earlier this year, I’m really feeling good about limiting some of the unnecessary craziness from the girls’ lives this month, and choosing to prioritize time with them over some of my remaining meetings.

And I’m finding that with a little effort, I can spin all sorts of things into a fun “adventure” from the girls’ perspective, whether it’s a day of errands or helping me clean the house. For example, since I explained to them how clearing out old stuff we aren’t using anymore can help us to rearrange what’s left into something that works better for everyone, they’re all gung-ho at helping me rearrange the living room. And even when their enthusiasm wanes partway through some of the rearranging, we’ve at least achieved a new level of cooperation when it comes to keeping the living room tidy.

Most importantly, though, I hope I’m teaching the girls a thing or two about how to enjoy life without going overboard. Especially during the holiday season – a time of year that often defies any notion of less being more – it’s oh-so-easy to live life to excess: eating and drinking more than we should, spending more than we can afford, accumulating stuff that we don’t really need, and adding holiday commitments to our schedules without thinking about where the time’s going to come from.

I like to think that I’m modeling for them a life lived within our means, and finding joy and meaning in the time we spend together as a family.

What about you? What do you do to try to simplify things and minimize stress and excess around the holidays? Let us know in the comments!

NOTE: This post contains affiliate links. If you like what you’ve read here, please consider clicking on the links. All purchases made through affiliate links help to offset the costs of running this website, without costing YOU a penny. Thanks in advance for your support!

13 thoughts on “Less Is More: Three Ways We’re Cutting Back and Living Better This Holiday Season”