Are you sick of listening to your kids belt out the theme song from Frozen yet? Do you wish that the singing purple dinosaur had never been invented? Do you prefer some good music for a long car ride over hearing your kids’ dueling electronic toys in the backseat?

Do you have a long car ride to relatives’ homes coming up over the next few weeks?

If you have a CD player, a car stereo you can plug your smartphone or MP3 player into, or portable speakers for your device, treat yourself and your family to some tunes that you all can handle for your car ride. Trust me, it will make your journey a happier one for everyone involved.

Need some inspiration? These are some of our favorite tunes for traveling that the whole family can enjoy: 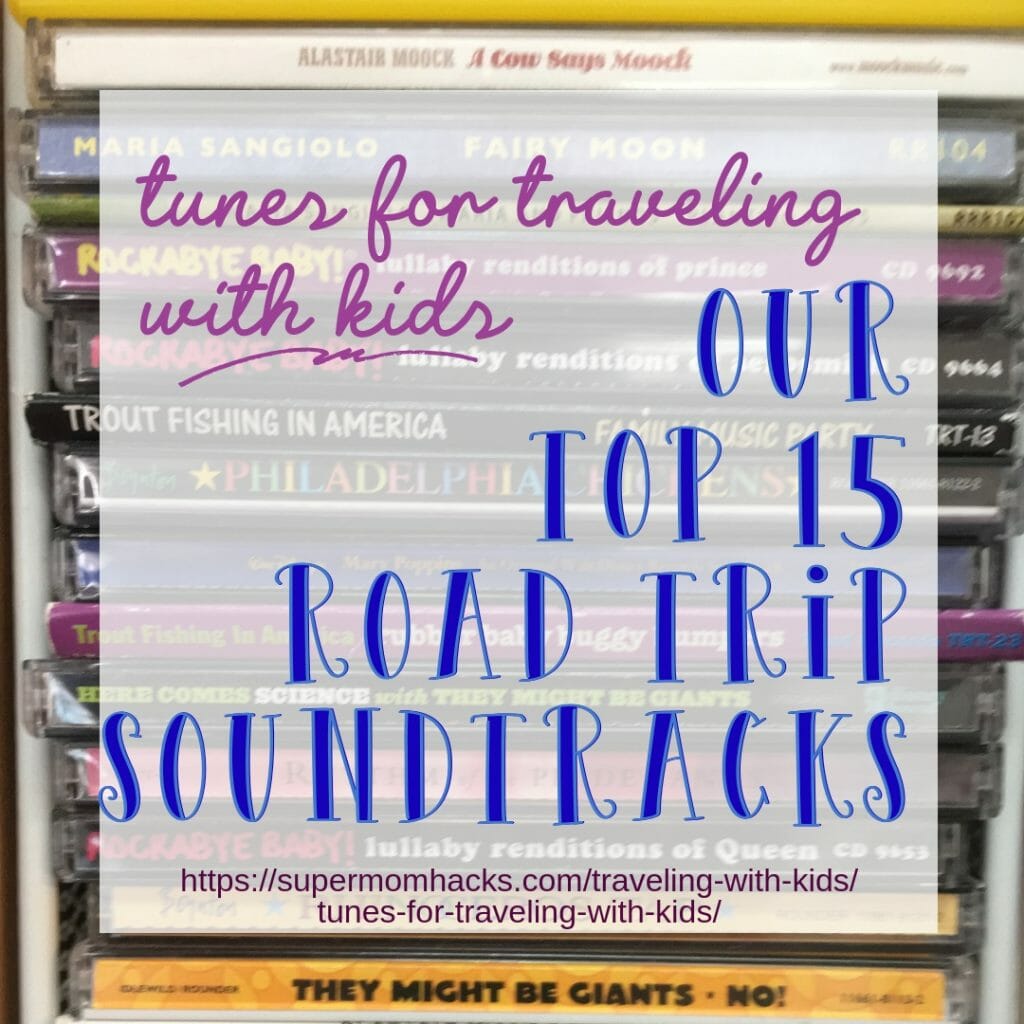 If you’re ready to escape the songs from Disney’s recent blockbuster, take a trip back in time. Over the past year, my girls have acquired an extensive library of classic Disney films on VHS for practically nothing (since we seem to be the only ones around here who still have a working VCR).

As they’ve immersed themselves in the world of Disney from generations past, I’ve been reminded of the stellar talent that has contributed to the musical scores behind some of these pictures, such as Elton John and Tim Rice’s collaboration on the soundtrack for The Lion King

. Equally enjoyable is the companion album of music inspired by that film, Rhythm of the Pride Lands

. (Although they aren’t in our musical library, there are plenty of variations on this theme

, including the original cast recording for the Broadway version

of The Lion King, and the soundtracks for the various movie sequels.)

Although not a Disney film, the girls are also fond of watching Cats

, thanks in large part to Andrew Lloyd Webber’s stellar music

. The next time I’m tempted to expand the soundtracks portion of their music library, I think I’ll look into soundtracks for Mary Poppins

, The Sound of Music

, and The Jungle Book

For those of you who remember They Might Be Giants as an alt-rock group from the last millennium, you may be surprised to know that they’ve branched out into kids’ music in recent decades. Here Comes Science

is the one my husband and I most enjoy listening to along with the girls (though our daughters are also quite fond of No!

, their debut entry into the children’s music scene). And if you have a DVD player in your car, the deluxe Here Comes Science 2-in-1 includes a bonus DVD for even more fun!

This folk singer/songwriter has a number of children’s albums out (as well as albums for grownups). The two that our family finds the most all-ages-friendly are Hello Moon

, which includes such classics as “I’ve Been Workin’ on the Railroad,” and Under the Mystic Sea

, an album that teaches environmental responsibility with catchy lyrics.

If you only know Boynton as the creator of cute stickers and board books, you’re in for a treat: she also writes kids’ music. Several of her books double as lyrics on her albums; our family’s favorites are Rhinoceros Tap

. Whether you hate peas or love her kids’ story Snuggle Puppy, there’s a song here for you.

#7 Alastair Moock, These Are My Friends

Moock is another singer-songwriter whose own parenthood inspired him to branch out into children’s music. While his third children’s album, Singing Our Way Through

, was a 2014 Grammy nominee for Children’s Album of the Year, our personal favorite is his second, These Are My Friends

It’s hard for grownups not to laugh at the alphabet song sung backwards, his mishmash of every nursery rhyme you can imagine, or the track “Three Like Me” – a preschooler’s take on those moments that parents find truly exasperating. If you and yours haven’t yet reached the preschool years, I heartily recommend starting with his debut album in children’s music, A Cow Says Moock

, which includes an ode to twins and a tribute to the humble belly button.

While neither my husband or I is a country music aficionado, my husband appreciated the musical genius and legacy of Johnny Cash long before the biopic Walk the Line

made a convert out of me. Thus Hushabye Baby: Lullaby Renditions of Johnny Cash

is a natural choice for our kiddos’ music library.

If you’re a country music fan, you’ll want to check out the whole Hushabye Baby line

. Hushabye Baby is an offshoot of Rockabye Baby (see below), and their instrumental renditions of your favorite country music songs are a little more upbeat and less lullaby than their Rockabye Baby counterparts, in my experience. Thus, this album is suitable for listening to anytime during a long car trip – not just when you’re trying to get your offspring to go to sleep.

When you’re four or five hours into a long car trip, even the best kids’ albums can leave you longing for some of your own “grownup” music. Not coincidentally, this is about the time I’m usually wishing my kiddos would nod off to sleep. If you plan your travel so that at least part of your journey comes after dark and/or bedtime – a strategy I highly recommend – then you’ll also want some music available that will put the kids to sleep while keeping the grownups awake.

, a whole line of tribute albums to your favorite rock artists past and present, rearranged into soothing lullaby-worthy instrumental versions. If your own personal road trip playlist would ordinarily include less-than-family-friendly artists anyway, this is an especially good way to introduce your kiddos to the music you love, without the lyrics you’d prefer they not learn until they’re older.

While I can no longer in good conscience rock along to the driving rhythms of Aerosmith, Prince, or Queen in their original formats on long car rides, I can still groove to the kid-friendly versions on these albums. The fact that there are no lyrics for the kiddos to sing along with, combined with the soothing lullaby-format arrangements, are perfect for helping them fall asleep so the grownups can survive the final leg of a long car trip in peace.

The folk-rock duo of Keith Grimlet and Ezra Idlet had a musical career before their first children’s album, Big Trouble

, debuted in 1991. But Big Trouble’s arrival marked the founding of a new empire in children’s music. Four Grammy nominations and two-plus decades later, Trout Fishing in America is still cranking out albums loved by kids and adults alike.

My husband was less familiar with this band than the girls and I were when we had the opportunity to take our girls to a live show last year, but he came away a convert. While their most recent kids’ album, Rubber Baby Buggy Bumpers

, includes the fun-to-sing-along-to “Boo!” and “Don’t Touch My Stuff!” – a song kids and parents alike can relate to – our family’s favorites are still Big Trouble and the live concert album Family Music Party

The former includes several fun dinosaur-themed songs, plus the lullaby I still sing to my girls before tucking them in each night. The latter includes the counting song “Eighteen Wheels on a Big Rig” and sing-along favorites to which kids and adults alike can relate, “My Hair Had a Party Last Night” and “Baby’s Got the Car Keys.” Both albums include my husband’s personal top pick, “All I Want is a Proper Cup of Coffee.” If you’re looking for artists whose kids’ albums are a tad more “grown-up” than most kids’ music, then TFIA

are tied, in my family’s opinion.

Here’s wishing you a happy, harmonious, and peaceful ride on your next family car trip. If your family has its own personal favorite playlists or albums for long car rides, do let us know in the comments! 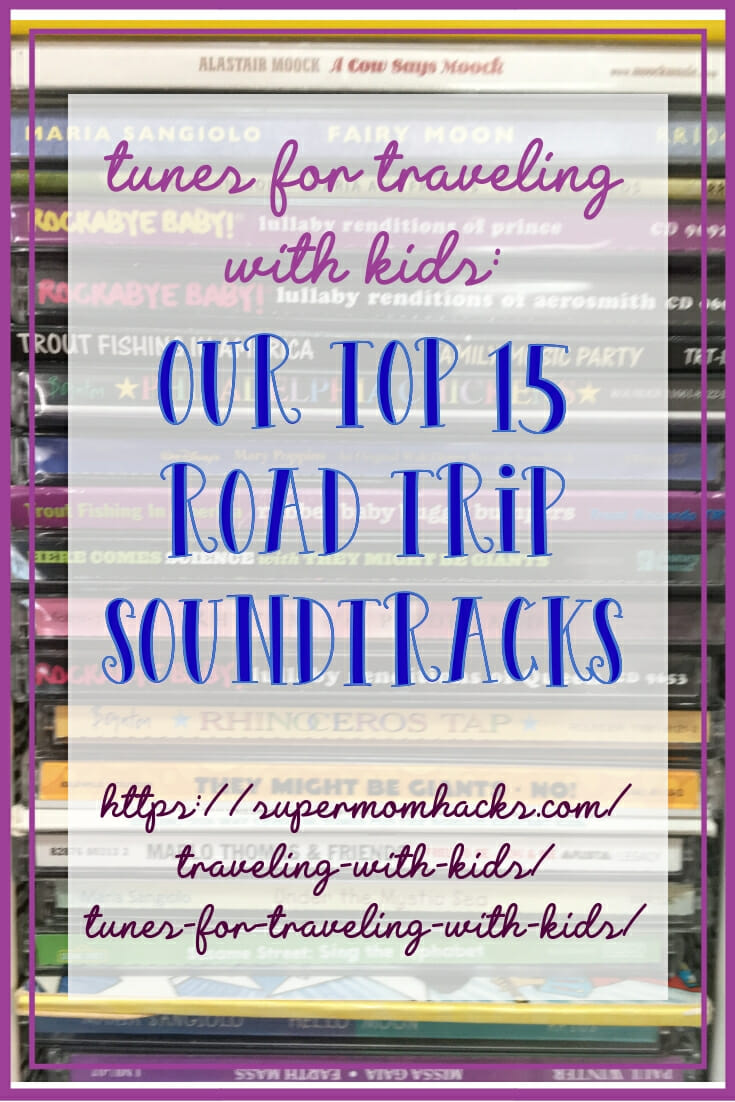 23 thoughts on “Tunes for Traveling With Kids: Our Top 15 Road Trip Soundtracks”