It’s 1:15 a.m. My husband and children are once again sound asleep upstairs, but I’m wide awake. That’s because a half-hour ago, my dear husband nudged me out of a deep sleep and informed me that Essie wanted me. Translation: Essie had to go potty, and it was my turn to deal with it.

No doubt Essie had originally come looking for him, and that’s one of the reasons he is indeed my dear sweet husband. For various reasons, he has done the vast majority of middle-of-the-night duty with both our girls, even before they were weaned. (Thank you, breast pump and bottles!) But tonight, having done middle-of-night duty most of this week, he decided it was my turn; and in all fairness, that was fine.

Whereas my last post was full of toilet-training ideas that have worked for someone, somewhere (but not our family), this post is about the three tactics that are helping our youngest become bodily-function-self-sufficient at last. They are:
1. Choosing a date,
2. Using outright bribery, and
3. Going commando.

How we got to this place

As I was working at my last consignment-sale event a few weeks ago, I racked my brain trying to think of something we hadn’t tried yet to terminate our household’s five-plus-year relationship with diapers. Then I remembered that Kimmie’s godmother had bribed her younger son to get him out of diapers by telling him that there were no changing tables at Walt Disney World (where they’d already planned an upcoming family vacation), so he’d have to get out of diapers if he wanted to go see Mickey Mouse.

Going to Walt Disney World isn’t in our family budget, time-wise or money-wise. So I tried to think of something that would be equally appealing, and then it dawned on me: Bouncy-House Heaven. 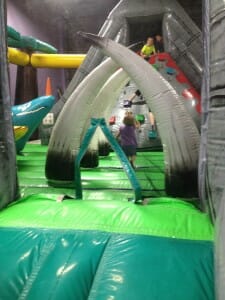 There’s a local establishment that is filled with inflatable bounce houses inside a large warehouse space – “thousands” of them, if you ask Kimmie, who recently attended a birthday party there. From the brief glimpses Essie got at drop-off and pick-up time, this place does indeed seem like heaven.

As a general rule, I avoid bribing my children and lying to them. But out of desperation, I decided that if there were ever a time for possible exceptions to both rules, then this was it.

So at the first opportunity, I texted my husband to see what he thought of telling Essie that WHEN she was fully out of diapers, THEN she could go to Bouncy-House Heaven – because they don’t like kids in diapers bouncing around inside their bouncy-houses. (He agreed with me that even if this isn’t an official rule of Bouncy-House Heaven, it might as well be, for general sanitation purposes.) Since Sale Event meant long hours for the rest of the week for me, I suggested that he float the idea past Essie ASAP.

My dear husband followed up on this suggestion, but according to his own carefully-crafted plan. First, he started pointing out to Essie that big three-year-olds really don’t use diapers, and got her to agree that in a few days (Saturday, the only day of the week he doesn’t work right now), she would stop wearing diapers. I’m guessing she went along with the idea in part because Saturday was a distant, abstract, “future” concept at the time.

About 24 hours after Essie had verbally signed on to the chosen stop date, my husband introduced the Bouncy-House Heaven bribe. Initially, he disliked the idea of such a blatant bribe – coupled with a major stretching of the truth – as much as I did.

Still, though, we were in complete agreement on a few basic facts. Our youngest clearly knew how to use toilet facilities rather than her drawers when she chose to. What she seemed to lack was a clear motivation to make this her standard operating procedure. Having tried everything else we could think of to help her be “ready” to ditch the diapers, bribery was the only thing we hadn’t yet given a shot. And most of all, we were both beyond sick and tired of the changing-table routine.

So, as the official Stop Date drew closer, dear husband (with the help of my mom, who was watching the girls while I was working at Sale Event all week) kept both the Saturday deadline and the promise of a trip to Bouncy-House Heaven, once the diapers were gone, at the forefront of Essie’s mind.

Saturday morning arrived. I was up and off to Sale Event before anyone else in the house even stirred. Apparently, when Essie got up, my husband promptly sat her on the potty, then changed her into some of her padded big-girl training underpants. A little while later, he was hunting for a dry pair and some clean pants to go with them. Not long after that, a second pair of training undies was wet, Having reached his own breaking point of desperation, my husband tried the only other thing he could think of: 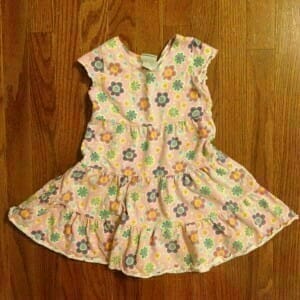 When I came home from the sale in the late afternoon, I found Essie running around the house wearing an old play dress. And nothing else.

Go, dear husband! Why didn’t I think of this months ago?

I’ve heard of toilet-training your child by letting them run around outside in the summer bare-bottomed, with the theory being that once they feel pee trickling down their leg a few times, they’ll get tired of it and use the toilet instead. Once school was out, I’d been seriously considering trying this if necessary, even as I envisioned Essie quickly mastering the squat-in-the-woods pose to keep her legs clean and dry.

Well, my dear husband had the guts to do what I hadn’t: try this method indoors.

After the dress went on and everything else came off, there was apparently one puddle-accident somewhere in the basement, which he dealt with promptly; dress somehow survived the incident clean and dry. But that was it.

By the time I got home from the sale event, Essie had been running around commando for most of the day, happily taking herself off to the nearest bathroom whenever she felt the urge, with nothing to do but sit down and hike up her skirt around her waist.

According to my mother, Essie was even overheard on one such trip-to-do-her-business saying to herself, “Getting closer to going to all those bouncy houses!”

I was both elated and terrified. Come Sunday, dear husband would be off to another long day at work while I took the girls to church, Sunday school, and then a play date at Keisha’s house with her two boys – all scenarios in which a little girl going commando seemed less than appropriate. After the girls were in bed, I sat him down to consult him on follow-through techniques.

How it’s going so far

The first few days, she was still loading her diapers at will outside of home. But as soon as she got home, clothes and diapers came off, Potty-Training Dress went on, and we were back to the new normal of having a child who finally sees a need to use the toilet like a big girl, every time. (During the day, at least.)

After a few days, when Potty-Training Dress desperately needed a trip through the washer, we dug out one of her sister’s jumpers and tightened up the straps so it would fit a three-year-old. A week into the experiment, when it was the jumper’s turn for the laundry, she began trying big-girl training pants inside. So far, she’s kept them dry.

Then she started keeping even her disposable pull-ups that she still wore out in public dry, too. And every few days, she references Bouncy House Heaven again.

A few weeks into this experiment, I began putting a disposable pull-up on her at night, since getting her into double cloth diapers at bedtime has been challenging for awhile now. (You know you need to graduate from diapers already when both your changing tables and your large-size cloth diapers and covers are too small!…)

Which leads me to my current insomnia.

The good news is, not only does she now have the bladder control to make it during the day – even when we’re out doing errands and there are no public restrooms in sight for a half-hour or more – but apparently she’s also developing the presence of mind to wake up at night before peeing her pants. (If you haven’t toilet-trained a child before, trust me: keeping them dry during the day and getting them to stay dry all night are two separate accomplishments.)

Enter my husband. Or, tonight, me.

I don’t know what he’s done with her these past few nights when she’s awakened him with “Daddy, I have to go potty!” – but tonight, when he nudged me awake and I stumbled out of bed, the problem was instantly clear. The nightlight that’s supposed to live in the girls’ bathroom had apparently disappeared, and Essie can’t reach the light switch.

So I dug out a nightlight, explained to her that when we have to go in the middle of the night we just do it and go right back to bed, and sat her down. I then realized that the step-stool she needs to reach the sink was in her sister’s room.

Hence I quietly tiptoed in, hoping not to disturb Kimmie – but apparently Kimmie was already awake.

Next thing I know, we’re having a potty party, with everyone in the bathroom except my husband.

No, Essie, we don’t read stories on the potty in the middle of the night. You can’t reach the faucet to turn on the water, even with the stool? – well, in a pinch, that’s what the sanitizer on the counter is for. Yes, you can pull up your pants by yourself. What, Kimmie? – no, you don’t need a lullaby to go back to sleep; you’re a big girl and you do this every night by yourself.

No, Essie, you don’t need someone to snuggle with you so you can go back to sleep; big girls go potty in the middle of the night all the time, by themselves, and besides, Mama needs to get back to sleep!

No, Kimmie, you really don’t need a lullaby! Good night, Essie. (close the door on howls from Essie’s room, as Kimmie begins to cry big crocodile tears) Oh, all right, Kimmie, one short lullaby, just this once because you’re sick, and then we’re ALL going back to sleep. (Sure enough, I had barely started singing when Essie gave up on her own crying fit.)

OK, so I got it all correct in the end except for the part about all of us going right back to sleep.

At least I think we’ve finally turned a corner, and the end of the tunnel really, truly is in sight at last.

If you’re not yet there with your youngest, take heart (especially if you’re not yet up to nineteen-months-and-counting!). And since summer is coming, maybe it’s worth trying the commando route, whether inside or in the privacy of your own backyard?

If that doesn’t work, there’s always bribery – if you can find the right bribe.