Both of our children have been way ahead of the curve in some areas (mostly academic), but have taken a more leisurely approach in others. Kimmie was nearly eighteen months old before she mastered the art of independent walking, and for Essie that skill didn’t come until the age of sixteen months.

And then there’s toilet-training. I’ve yet to meet another child who has spent a full sixteen months learning to get out of diapers, as our eldest did (and that’s not counting at night) – let alone the year-and-a-half-plus of our current efforts. If you’re beyond ready to kiss this particular aspect of parenting goodbye, read on.

Perhaps you’re wondering – as I have been recently – what else you could try to help your house graduate from diapers and changing tables, once and for all. If this is an area in which you and yours have reached an impasse, here’s a list of ideas. I know for a fact that most of them have worked for someone, somewhere, even if not for our family.

What hasn’t worked for us

Thanks to having a slightly-more-than-two-years-older sister who long disliked sitting on that big open adult-sized toilet (even with a toilet-topper seat), the child-sized floor units have been fixtures in our bathrooms since before Essie was born. They may help to explain why our younger child first decided to try using the potty right around her eighteen-month birthday – apparently, if only to prove to all of us that she could.

We had at least three variations on this theme, which we began reading shortly after that eighteen-month breakthrough. (She lost interest in them sometime after her second birthday.)

The ones Kimmie trained on were vintage models from my childhood, and by the time she was done with them, they were beyond usable. So we made a big deal of letting Essie sit on a wide assortment of big-girl potties in the store, until she found one she liked.

OK, so she didn’t pick out her own – but let’s face it, I’m not ready to go to a place where my kiddos are selecting their own clothing in-store yet. And since I’ve got a pretty good handle on my offspring’s varied tastes, and a supply of those extra-padding “training underpants” was one thing we didn’t have leftover from Kimmie, this was a no-brainer. Big presentation of appropriate selection in favorite colors/totem animals. Which then means…

Again, totally a child-driven idea: “Mama, I wanna wear my big-girl underpants today!” A few hours and several soaked pairs of underwear/pants later, I’d call a halt to that experiment for the day, over howls of protest – if only because we were out of clean/dry big-girl options.

Both our girls love the miniature flush toilets at preschool, and thanks to having a big sister at that school, Essie was already well aware of this preschool fringe benefit, long before she herself entered the Little Tadpole class (for two-year-olds) last fall.

Peer pressure definitely helped with Kimmie, who was one of the younger kids in her Tadpole class. Alas, Essie is one of the older kids, so by comparison, her classmates have been less advanced in this skill than Kimmie’s peers were. And to be fair, Essie is super at doing her business on that adorable little toilet at school – and pretty much any other time we’re away from home. 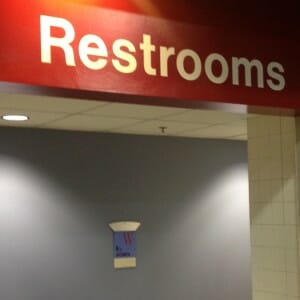 In fact, Essie knows the location of the restrooms at just about every store we frequent, and she’s very good at asking to go potty whenever she sees one of them. This, however, does not translate into consistent toilet use at home.

Nor does it translate into consistent use while out and about, for that matter. For each time she has asked to go at our favorite crafting-reuse store, there’s been another time when she’s at the open crafting table and suddenly you can smell her a mile away, and next thing I know I’m changing a diaper on the floor of the women’s restroom. And then there was that infamous lunch at Costco…’nuff said.

My psychologist friend Barbara, whose two kids are about as far apart as mine, swears that her son toilet-trained his two-years-younger sister, by dragging her along with him whenever he went to the bathroom. I’ve tried various ways to enlist Kimmie’s help in the process – whether by pointing out that Kimmie doesn’t wear diapers anymore (since, of course, Little Sister wants to do everything [else] that Big Sister does), or by explicitly asking Kimmie to encourage her younger sister’s potty use. But apparently the stubbornness of a two-year-old is stronger than even the peer pressure of the big sister one idolizes.

We tried this long before our pediatrician suggested it at Essie’s three-year checkup. His variation, which worked for his kids: Let the child choose one story that you will read to them while they’re in there; thus it’s a big deal, and they’re distracted enough that they see this as a fun diversion in their day. See above observations on the stubborn tenacity of a child who does not want to be told when to go potty, and will literally kick and scream if you try to get her to go when that timer goes off – not exactly a positive experience to impart to said child.

When my friend Keisha’s eldest turned two, she and hubby decided they were going to toilet-train him by trading his diapers for big-boy undies all day, every day. They had a lot more tenacity, patience, two-parent-in-the-home presence (did I mention that my dear husband has been working way too many twelve-hour days since January?), and thus ability to keep the child from leaving home for days on end, than we do. (Apparently they also had more spare pants and undies.)

I totally credit them for having the guts to go this route, because it worked for their son, even though the results weren’t instantaneous. But as noted above, I can only take so much changing of wet attire (not to mention cleaning up of the resulting puddles and washing of the resulting extra laundry) in one day.

After all, if you’re going to use the potty on your own like a big girl, you need to be able to get your drawers up and down by yourself, yes? Alas, all this change has done is add another expense to our cash flow.

While on a family vacation this past winter, I was trading notes with a dad whose daughter, scarcely older than Essie, was fully trained. They had tried everything we had, to no avail; what did it for their kiddo was actually throwing away the big-girl underpants after each “accident.” He claimed that they only had to do this once; their daughter was so horrified to see her beloved big-girl undies being trashed that she became a regular-potty-using convert after that.

We tried it as soon as we got home. After a week of experiments, I got sick of fishing undies out of the garbage each night so I could toss them in yet another load of laundry.

When we zeroed in early this year on the fact that going at home was the real stumbling block, we decided to try sticker rewards for potty use at home. (I guess stickers work for a lot of kids, but they certainly didn’t make a huge difference for Kimmie.)

Essie likes stickers, too, and likes getting them on the calendar, but this incentive hasn’t motivated her any more than anything else we’ve tried. When you’re in the middle of playing or eating or reading a book, why bother getting up to go to the bathroom when you can stay put and do your business in your diaper?

Our preschool’s policy is that only Tadpoles are allowed to wear diapers. For any class where all the kids are at least three at the start of the school year, either the kid is already trained, or the parent gets a call whenever the kid’s diaper needs changing, according to the school handbook. I made an offhand reference one day to this fact in front of Kimmie, and next thing I knew, she was telling Essie that if Essie doesn’t get out of diapers, she’ll have to stay in the Tadpole class next year.

There are just a few problems with this plan: Besides the fact that the school wouldn’t let her stay in the Tadpole class even if she wanted to, Essie is quite happy there and loves her teachers – so to her, remaining a Tadpole forever actually seems appealing at the moment.

When Kimmie was a baby, I came across the hilarious book How to Potty Train Your Monster

at a church garage sale, and bought it on impulse. When Kimmie introduced herself to potty use a month before her second birthday, the book seemed far too sophisticated for even our budding little intellectual.

Fast-forward to her third birthday, at which point the “big-girl” potty training books had long since become passé. We gave this book to Kimmie as a birthday present, a full year before her obsession with Mike and Sully and everything else Monsters Inc

began. For Kimmie, this book was just the right thing at the right time to help motivate her to the finish line.

Well, Essie stumbled across the book in the bookcase about six months ago, and soon had it memorized. We then had the brilliant idea of marrying this book to our daughters’ love of Mike and Sully (Kimmie has both a “hard Mike” and “soft Mike,” and Essie sometimes chooses to sleep with both hard and soft Sully dolls): why not make a “monster potty” for Mike and Sully to use?

Once we found some appropriate discarded caps from spray cans, Kimmie took this idea and ran with it. Therein lies the problem, I think. She’d already set up an elaborate little “house” on her bedside table for Soft Mike and Soft Sully, so the three potties (one for each monster, one for a guest) and monster sink all live on her bedside table next to the bed.

Thus, for all Essie’s initial excitement when we suggested that she should potty-train her buddy Sully – and herself, while she was at it, so she could set a good example for him – this has clearly become Kimmie’s baby. (If your three-year-old still has a long way to go, I can’t recommend How to Potty Train Your Monster highly enough; even though it wasn’t the final piece in Essie’s puzzle, it has definitely helped a tiny bit.)

However, this is mainly because buying a bag of M&Ms for potty-training purposes = I would eat most of them, long before Essie got to have more than a handful. Not good. (Although yesterday during a play date with some mom-friends from church, one of them mentioned a brilliant variation on this theme: use a Pez dispenser

to dispense one Pez

per successful use of toilet or training seat. If I’d thought of this sooner, I definitely would have tried it.)

Now that school’s almost out and summer is nearly here, perhaps you have a goal of getting someone in your household out of diapers once and for all. I hope this post has given you a few new ideas for things to try; if you’ve already been through all these ideas, see my next post for our final solution to the toilet-training dilemma.