Are your kids starting to get squirrely for the end of the school year and the start of summer break? Do you find their school-year routines and ability to self-regulate breaking down? Those skills have long since flown the coop around here, so we tried something new this morning: a brand-new set of clothespin chore chart “reminders.” 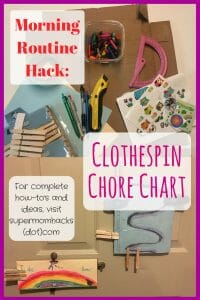 We’ve had chore charts before, back when my third-grader Kimmie was in kindergarten. They worked great, until she decided she was “too big” for them and stopped using them.

But lately, getting her on the school bus each morning has sparked a daily Battle Royale. She can’t get out of bed, even though she’s getting an insane amount of sleep. She won’t get herself dressed or make her bed, let alone come downstairs and eat, despite signing a contract last fall stating that these things were her responsibility. After-school chores haven’t gone much better. 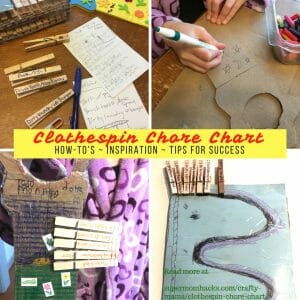 Time for another chore chart?

Yet I was surprised when, during a recent chat with one of her teachers, the teacher said she’d shown Kimmie her own third-grade child’s chore chart, and Kimmie seemed intrigued. Maybe hearing that other third-graders use them made chore charts appear less babyish?

So after school that day, I asked Kimmie if she’d consider trying one again. I also asked her how SHE would design the ideal chore chart.

For starters, she wanted a clothespin chore chart, with the chores written on wooden clothespins she could move herself. That was something I’d never considered. But the more we fleshed out Kimmie’s ideas over the next few days, the more sense using clothespins made.

By the time we were done, we had three different chore charts for our two girls. And both of Kimmie’s charts actually do double-duty (AM and PM), something the clothespins make possible.

So if your kids’ morning, after-school, and/or evening routines need a reboot, maybe a clothespin chore chart will make the difference in your house, too. 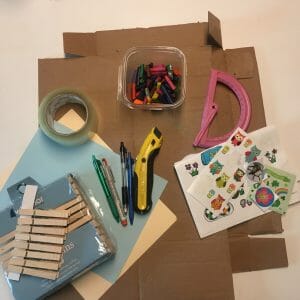 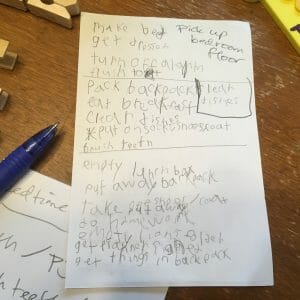 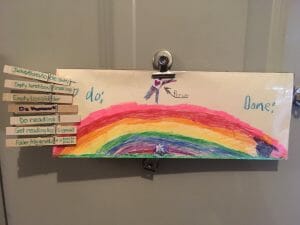 Since Essie didn’t want to miss out on the crafting fun – and since she struggles with after-school routines – we made her a basic “flap style” chore chart with a single piece of cardstock. I folded the cardboard in half the long way, leaving a flap that was separate from the back. This way, the clothespins can clip easily onto the flap, while the back can be secured to the wall. (Or in our case, magnet-clipped to the inside of our front door.) 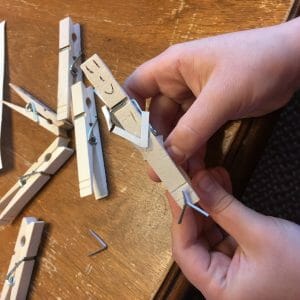 After I folded it in half, Essie drew a rainbow on her cardstock with a pot of gold at the end. I then cut a piece of corrugated cardboard as big as the back. Next I covered the whole thing with clear packing tape. This both attached the cardstock to the cardboard backing, and created a clear protective coat over the flap, so repeated use (hopefully) won’t damage it.

I wrote Essie’s after-school tasks on one side of her clothespins. She decorated the other side with little people who could dance at the end of the rainbow, once they reached the pot of gold.

The solution I thought up was to make the chart three-dimensional: get some colorful duct tape, and use the tape to attach a paper-towel tube to the backing. This would both decorate the tube (aka waterslide), and hold it onto the chart. The clothespins could clip at the top, slide down the tube, and then hang onto the bottom.

Kimmie nixed my idea. She insisted that her waterslide would be a two-dimensional drawing.

So we came up with this compromise:

To make the chart stick out far enough from the wall that the clothespins can easily attach, this is what we did: 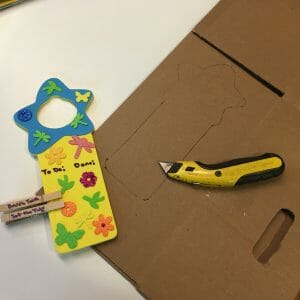 Early in our afternoon of clothespin chore chart crafting, Essie disappeared to her room for a moment. When she returned, she had a sample chore chart that she’d apparently crafted at Scouts a few weeks before (unbeknownst to me). This “chart” was actually a sign that hangs over a doorknob, made from a foam craft kit. This doorknob-hanger also used clothespins; on each pin, her leader had written sample chores.

I persuaded Kimmie to pattern her upstairs chore charts after Essie’s, which I traced onto cardboard before using the box-cutter to cut it out. Kimmie then decorated one side for her “Morning To-Do’s” and the other for her “Evening To-Do’s.” When she had finished decorating, I covered the whole thing in packing tape to help it stay intact over time. 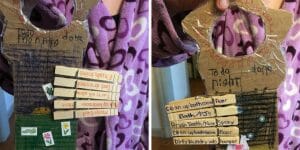 For her morning and evening chores, I made another set of double-sided clips. When Kimmie has all her morning chores done, all she has to do is turn over the sign, and it’s ready for bedtime.

4. For shared chores that alternate:

We also decorated one special two-sided clothespin, appropriated from the set Essie brought home from Scouts, that says “Set the Table.” One side is colored silver for Essie; the other is bronze for Kimmie. Each day, one of the girls will set the dinner table and then move the clothespin to her sister’s afternoon chore chart when she’s done. No more fighting over whose turn it is!

Has your family made a clothespin chore chart before? How did you design it? Let us know in the comments!