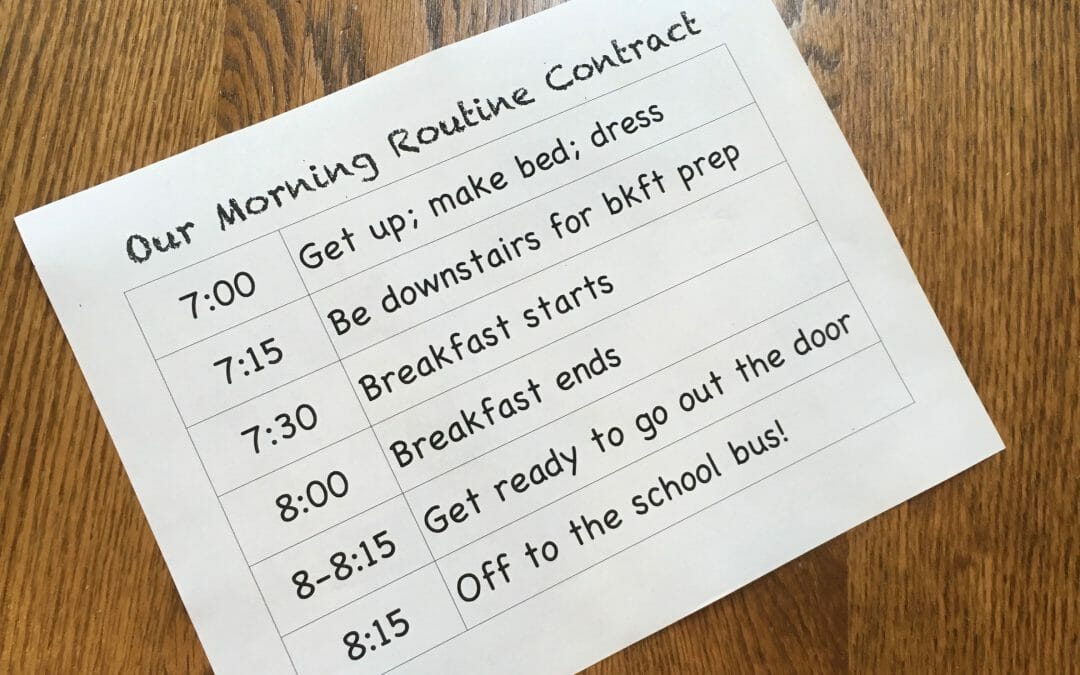 If you’re one of those families who magically and effortlessly gets your kids back to a school-year routine at the end of your summer holidays, you need not read further (unless you want a good laugh at the rest of us). But if you’re in the 99% of us who struggle in this area, here’s my latest attempt to address this challenge. My girls and I have now hammered out a Morning Routine Contract. 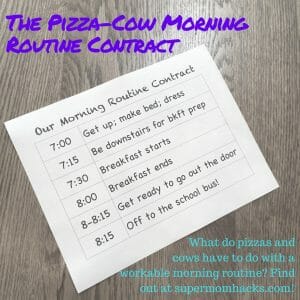 I’m a firm believer in morning routines. And in making/keeping promises. And in kiddos learning to take responsibility for themselves, rather than relying on parents to do everything for them.

Why a Morning Routine Contract?

This is especially crucial for Kimmie, who enters third grade next week. My latest effort to help her shoulder more of this responsibility is by collaboratively working out a school morning routine/timeline with the girls. Then typing it up into a written contract that all three of us will sign.

Trying to help her develop these skills has been a constant battle for her teachers and us in each subsequent school year. Formal testing late last school year ruled out ADD/ADHD/a host of other explanations, so we’re once again trying to develop frameworks that will help her internalize these skills. The Morning Routine Contract – and the corresponding code word “Pizza Cow” (more on that later) – is my latest attempt. 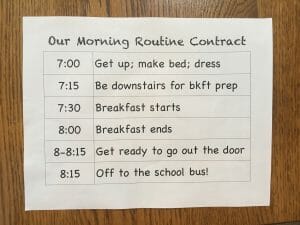 This is the short version of our Morning Routine Contract, which I’ll hang in the upstairs hall once it’s all signed.

Each girl has had the same morning timeline since she started preschool at age 2: Get up at 7am, breakfast at 7:30, breakfast over at 8am, get ready to head out the door after that.

We first discussed this fall’s version of the Morning Routine about two weeks ago over dinner. They agreed that the above additions make things smoother for everyone and decrease stress.

I also discussed, especially with Kimmie, that she needs to take responsibility for her own breakfast time more. She has never been a “morning person,” and often fights eating at 7:30 because she’d rather read a book. Even as her increasingly “hangry” behavior suggests that she’s actually quite hungry.

I’m a firm believer in kids having a good breakfast to help fuel their day at school – especially since our school virtually phases out morning snacks by second grade. Our breakfast always starts with fruit, then carb and/or protein, and ideally a glass of milk or other dairy as well.

Kimmie is also famous for requesting one food at breakfast, then changing her mind when she sees it on her plate. Or taking one bite, then proclaiming she doesn’t “like it.” (These are tried-and-true favorites of hers, mind you.)

Needless to say, when she suddenly decides she wants to eat at 7:59, or places a complex order at 7:55 for something different than what I’ve prepped, this doesn’t go over well. Or work well with getting to the bus on time.

So we had an in-depth conversation the other night about the fact that this year, it is up to HER to decide when, whether, and how much say she gets in her breakfast process: 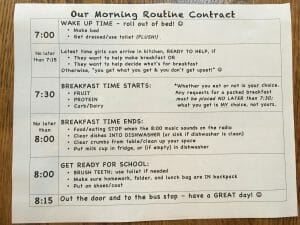 This is the detailed version of our contract, which I’ll hang downstairs once the girls have signed off on it. (I’m also going to label a Post-It tape flag for each kiddo, so she can track her progress by moving her flag vertically down the sheet, if she wants.)

When I spelled things out this way, she agreed that she’d quickly tire of my version of “breakfast-on-the-go.” So she also agreed to a) make an effort to be at the table for 7:30 to start eating, and b) accept responsibility for her choices if she decided to skip breakfast. (No more toast-with-peanut-butter to eat on the way to the bus stop!) 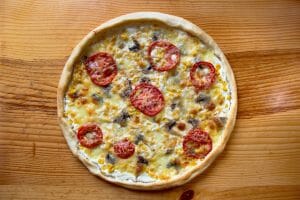 Every time we discuss this morning-routine plan, the girls agree that we should practice it BEFORE school starts. And each time, they’ve promised to do their part.

By last night’s dinner, with a handful of days left before school starts, we needed a new solution. So we discussed what it means if someone makes a promise to do something. And if how that person then doesn’t uphold their promise, then others have the right to call them on it.

For example: If Mama promises the girls some iPad time, but then doesn’t unlock the iPad, the girls have every right to hold me accountable. I suggested we try using a “code word” as a gentle reminder of a promise made that wasn’t being kept.

The code word had to be something we agreed on/remembered easily, and NOT a word or phrase we’d ordinarily say. After much deliberation, the girls decided that “Pizza Cow” should be our code word. They LOVED the idea of being able to call me out for not upholding my end of a promise. 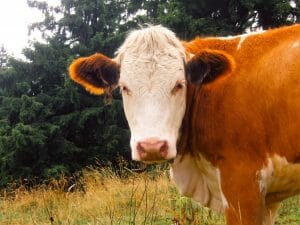 But then I explained that having a code word also lets ME call THEM out on not upholding their promises. And I gently reminded them that we’re a long way from “back into the routine” for back-to-school next week.

So I suggested last night that we make our promises more official, by signing a Morning Routine Contract. This would list out each step of the morning routine they had worked out with me. I would type it up and make several copies, one for upstairs and one for downstairs. (This will replace Kimmie’s chore charts from former years, which she usually abandons about halfway through the year. Besides, I’m out of little magnets at the moment for making more.)

Now that I’ve typed it up, all that’s left is for each person to sign it. We have discussed that signing a contract means promising to uphold our part of the arrangements spelled out there. After we sign it, it will be up to us to uphold our promises. And to say “Pizza Cow” at any time to anyone NOT doing their part. 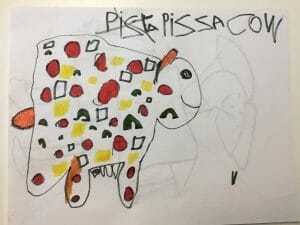 This is Essie’s rendition of a Pizza Cow.

However, to encourage them to embrace our last few days of back-to-school practice, I dangled a carrot before them:

I’m not sure how all of this will work, but I’m out of other ideas at this point. So here’s hoping for the best!

What about you and your family? Do you have kids who struggle with time management and fulfilling responsibilities? What solutions have you tried? Is a Morning Routine Contract one of them? Let us know about it in the comments! 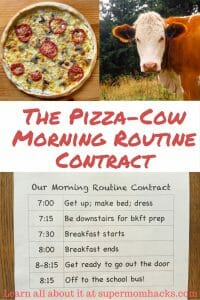