Isn’t this spider web craft adorable? Surely it must be super-simple, right?

Well, yes, IF you have the directions. Which I did not. So, as with everything else in my life that ends up being harder than I’d ever imagined (such as making a ghost costume), I had to hack my way through it.

So yes, you too (and your kids!) can make this cute spider web craft, Super Mom Hacks style. Even if you are not innately crafty. With these hacks, I promise you it’s easy-peasy. Without – well, good luck. 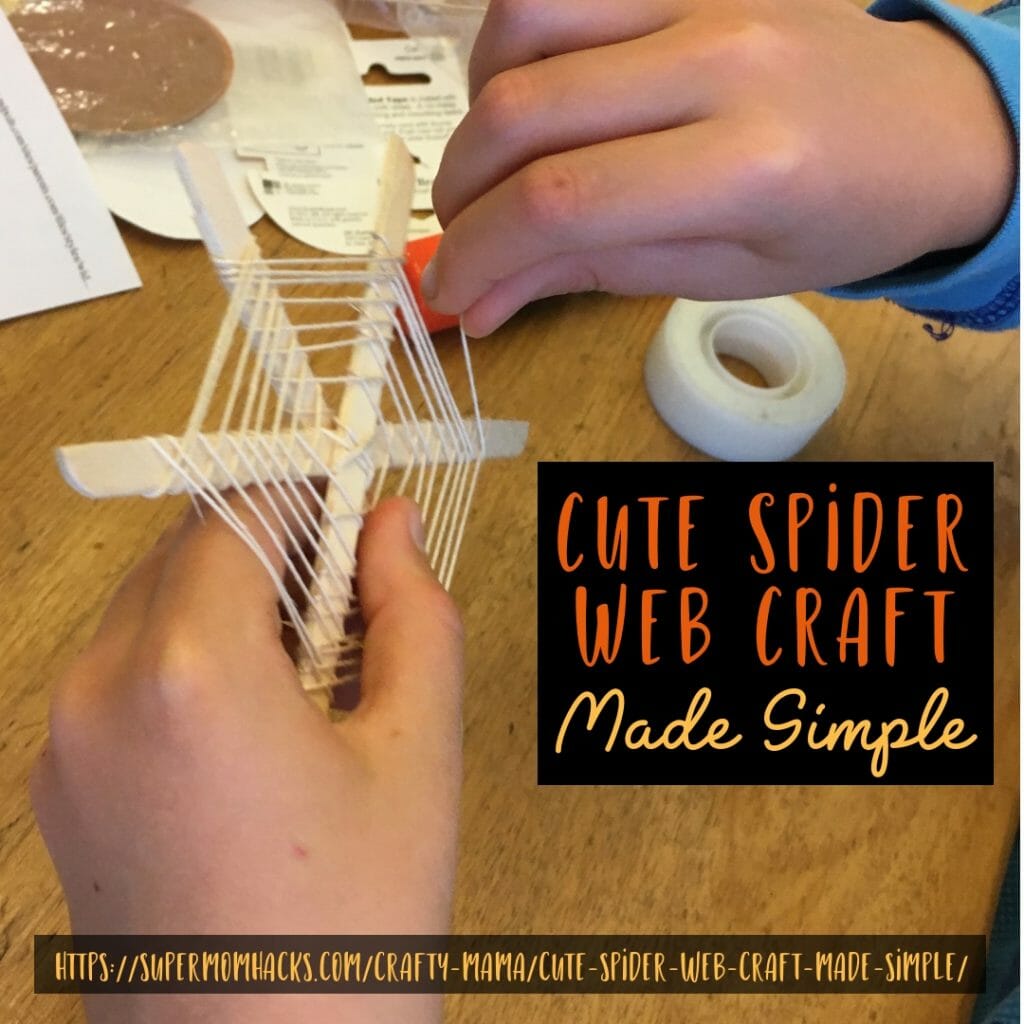 First off, I have no idea where this lovely craft idea originally come from online, or whose it was. It is a clever activity, and just adorable once it’s finished. And I am sure my modifications totally bastardized the original creator’s intentions into something far less beautiful.

But here’s the thing: if I’m actually going to do  a craft with my kids, it has to be DOABLE. As in, easily doable. WIthout requiring innate crafting geniuses to pull it off.

This adorable spider web craft, as it originally came to me – not so much.

How you might find yourself here, and what to do about it:

Last fall we flew to visit my brother Evan, his wife Alicia, and their seven-month-old baby Abby. It was our first time meeting our new niece/cousin, and my girls were super-excited. Not to mention super-high-energy (as one would expect of elementary-school kids).

When you’re in a house with a compact floor plan and a baby who still naps at least 2x/day, this is a recipe for disaster.

Fortunately, my SIL Alicia is a domestic goddess and Crafty Mama Extraordinaire. Her house looks like a spread from Better Homes & Gardens, always impeccably decorated for the holiday of the month. And whereas I’m the eldest and a first-time auntie, Alicia is the youngest in her family. She already had a half-dozen nieces and nephews when she married Evan.

So every day while Abby napped, Alicia pulled out a different project to amuse my kiddos, then went to log a few hours of telecommuting time. One day, she handed us a pile of tongue depressors, a ball of twine, and a picture of this adorable spider web craft, and said to me, “Here, I bet you can figure out how to make these with the girls.”

No instructions. Just the picture, which she’d printed off Pinterest or something.

So I gave it a go. This is what I ended up with. The string would NOT stay nicely spaced out on the tongue depressors, which were clearly too wide for the intended purpose. All it did is bunch up in the middle, and look like a knotted mess. Nothing I tried would keep it from sliding down.

Nothing like feeling like a complete crafting/domestic failure, while your SIL the crafting queen could have probably pulled this off in her sleep. (Raise your hand if you can relate.)

Fortunately, Alicia had also left us a big box of general crafting supplies before retreating to her home office. In the box I found some scissors and some double-sided tape.

So I got to work hacking this craft to make it doable. First off, the tongue depressors were just too wide; we really needed narrower wood sticks, i.e. popsicle sticks. So I carefully cut several tongue depressors in half. Voilà: narrower sticks!

Next, after I’d taped the sticks together in the middle, I stuck a thin strip of double-sided tape to the back of each one. I briefly considered glue instead, but decided that would be too messy; I needed something to stick instantly, not something that would need to wait to dry.

Once I had those two things figured out, this crafting project was indeed as easy-peasy as it should have been from the start. Even the girls could pull it off!

So learn from my mistakes, get the right tools, and give this craft a try with your little creative geniuses this weekend: 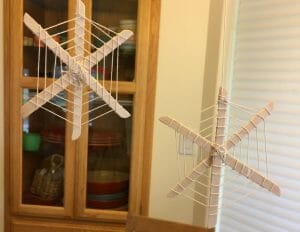 There! That wasn’t so bad, was it?

Like this cute spider web craft tutorial? Why not share it with others by pinning this image?