The holidays are coming. Are you ready for holiday travel? In other words, do you have the best travel carseat ever?

I love to start New Year purging before the holidays even hit. Winter is a great time for moving out the old to make way for the new, whether it’s holiday gifts or a winter baby’s birthday haul.

Maybe your growing child needs a new carseat anyway. And the holidays mean you’ve got plane travel on your agenda in the next few months.

And depending on how long you’ve been doing the new carseat thing, you might be sick of the sticker shock of constant carseat upgrades.

This was the boat we were in several years ago, when we flew cross-country to visit Evan and Alicia. Essie was still in an infant carseat then, and we were committed to traveling with her stroller to help free up our hands as we schlepped two small kids and luggage through multiple airport layovers. (I know, multiple layovers + small kids = dumb idea. But three flight segments is literally the only way to get from where we live to where they live.)

But what to do about Kimmie? At three, she’d outgrown an infant carseat but was too small for a backless booster.

My hunt for the best travel carseat

So I started doing a lot of online research on how people deal with the carseat issue when traveling with small children. This sums up the horror stories I read:

Renting a carseat along with your rental car

Bringing your own carseat with you

Renting one at your destination

None of the friends I asked had good ideas, either. Their experiences of renting less-than-sanitary-looking seats with their car rental matched up with what I’d seen online. They also agreed that hauling a big kid’s carseat through the airport was about as un-fun as risking its not showing up if you put it through checked luggage.

So what’s the solution?

Finally, as I was about to give up, I stumbled across the answer to our problems. It seemed too good to be true at first, so I read up on it as much as I could. Then we bought one for Kimmie. It worked perfectly, and was SO much better than an actual carseat!

Of all the kiddo gear I’ve tried over the years, this one is by far one of the best-kept secrets I’ve discovered. That’s why it gets my vote as the 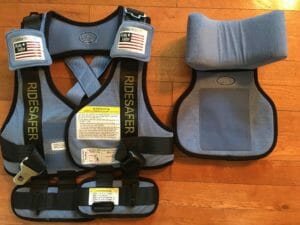 Here’s the thing: It’s not actually even a carseat!

But it works just like one, AND it’s approved as a carseat substitute.

In fact, if you’ve ever struggled to install a carseat correctly (as I have) – not only according to the instructions, but also securely enough that it does what it’s supposed to – I can assure you that it is actually easier to install than a carseat.

AND it will protect your child better than a carseat that’s not ratcheted down tightly enough.

In fact, it’s so easy to use that my girls can install it for themselves.

These vests, made by Safe Traffic Systems, work just like a carseat in the ways that matter:

For a cost comparable to a new “big-kid” carseat, you can have a vest that is compact, comfortable, and NEVER EXPIRES (unlike carseats). For a family with a lot of kids to go through, this is a worthwhile consideration.

And not only that, but it is sooooooo much more portable than a regular carseat:

The 411 on the RideSafer vest 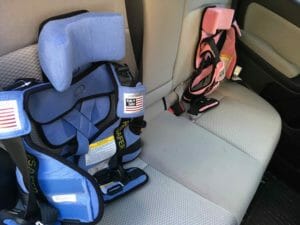 We like these vests so much that when we needed to upgrade Kimmie to a bigger carseat in Daddy’s car, we just used her size small Ride Safer vest. As soon as Essie was three, we got Kimmie a large Ride Safer vest, and put Essie into Kimmie’s old vest when riding with Daddy.

We have no problems bringing an extra friend home from school for a playdate, thanks to these vests. And when grandparents visit, it’s super-simple to swap the vests from Daddy’s car to grandma’s.

For more on how the vests actually work, see reviews here, here, here, and here. And this video shows how easy they are to use. (Plus, it also shows how to use the top tether for the Ride Safer Version 2 vest.)

Have you tried my Best Travel Carseat pick, the Ride Safer vest, for your kiddos? Is it your best travel carseat/carpool option, or your everyday go-to child restraint? Let us know what you think in the comments!