She can’t wait. She is soooo ready. Her first day of preschool, she marched right into the building without a backward glance. Kindergarten will be the same way. 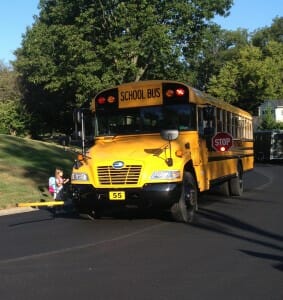 hat is, as long as she survives the bus ride.

Don’t get me wrong; she can’t wait to ride the school bus, either. For years her older cousins Adam and Zeke have been telling her how riding the bus is the best part of going to school.

My husband is a city boy, so he spent his entire school career walking to school, or riding a bike. He doesn’t get why the thought of riding the bus is such a thrill for a rising kindergartener.

I grew up in the middle of nowhere, miles from our local school building, so walking was never an option.

I remember when I grew up, there was one bus driver in our district that every kid prayed to avoid: Mr. Whittaker. (The kids called him Mr. Vinegar behind his back, because that described his personality to a T.)

Mr. Whittaker’s bus route was the worst one to be on because, as rumor had it, he was the only bus driver in our district who not only gave his charges assigned seats, but had RULES for riding the bus.

Fifteen of them, all posted inside the bus where everyone could read them – things like you had to sit in your assigned seat, and there would be no yelling or other loud noises – and you broke Mr. Vinegar’s rules at your peril.

Fortunately, I never got to ride Mr. Vinegar’s bus. But his reputation as the meanest bus driver out there came flooding back to my mind last week when we got a letter from our school district’s transportation department, with information about Kimmie’s bus route.

On the back of the letter was a twenty-item list, in a tinier-than-usual font, of our school district’s Rules for Riding the Bus.

I was floored. (Not to mention pleasantly surprised, as a parent.)

The next night at supper, as we were discussing Kimmie’s pending transition to Local Elementary School, she had just one question about riding the bus: “I wonder,” she thought out loud, “what I’m supposed to do when I get on the bus. What do I do next?”

Oh, Kimmie, have I got a rule list for you.

So that night before bed, instead of reading me a bedtime story, my precocious little five-year-old (who began reading a few months before her fifth birthday and has devoured everything she can lay her eyes on since then) read through the rule list with me.

Don’t get me wrong – this list was written for grown-ups, not little kids. There were a lot of big words she’d never seen before that she had to sound out (like “trans-por-ta-tion”), a few that she couldn’t sound out, and plenty that we still had to stop to define even though she managed to pronounce them.

But it’s nice to have a chance, finally, to give her a practical, real-life context for words I’ve been struggling to teach her for years. Like “pri-vi-lege” – something that big kids get to experience at times, often in conjunction with big-kid responsibilities. Or, in this case, rules.

There it was, right there in Rule #1: Riding the school bus is a PRIVILEGE. In other words, it’s NOT a right.

And as a PRIVILEGE, it can be revoked at any time. Not arbitrarily, but as the direct consequence of not following the rules.

I swear, I could have written this list myself – not as a list of rules for riding the bus, but as a list of the rules I struggle to enforce in our day-to-day coexistence as a family, as I attempt to help my offspring grow into responsible little people who can function in society and are pleasant to be around. That is, kiddos who will fit in with the basic unspoken norms of human behavior that we’ve either evolved over time to help our societies function, or created out of sheer parental desperation (usually, as a part of daily survival in homes not staffed by legions of servants).

Like, for example, Rule #2: Once kiddos board the bus, they are to go to their assigned seats and STAY SEATED, IN THEIR ASSIGNED SEATS for the entire duration of the bus ride!

Holy cow. I kid you not, this is one rule of basic civilized behavior that both my children seem to have erased from their brains over the summer. You might think they’ve spent their entire lives up to this point grazing like feral cats at mealtimes. And even if that were the standard operating procedure in our house (which it’s NOT – I’m a firm believer in eating proper meals while seated at a proper table), it’s not like they haven’t had one to three years’ practice of eating snacks at table, in designated seat, at preschool.

So what a shocker it was for Kimmie to discover that this basic notion of planting backside in chair and staying put for a period of time is NOT just Mama’s crazy idea of how we should behave at mealtime, but is also a skill that’s transferable to the privilege of riding a school bus!

Or take Rule #5: The only noises allowed on the bus are low, “conversational tone[s] of voice” – in other words, NO yelling, loud shrieking, spitting raspberries all over the place, or creating other noises that kids think are oh-so-cute but grownups find grating and totally inappropriate after one to five seconds.

Then there’s Rule #8: No food or drink on the bus. Why not? we discussed. Well, because the school bus – like the living room or the bathroom or the basement at our house – is a place that is not a Designated Eating Place. The kitchen and dining room table are Designated Eating Places; the rest of the house and world – bus included – generally falls outside that designation.

Funny that – the bus drivers, just like Mama, don’t like to have to clean up stray food that lands in places it’s not supposed to, let alone deal with the ants and other critters that routinely locate such deposits of wayward crumbs in record time.

Oh, and while we’re on the topic of designated seats and stray food, Rule #2 specifies not only that passengers should sit down and stay put for the duration of the bus ride, but also that they are to do so facing FORWARD. Rule #18 further elaborates that they are to keep personal property as well as bodily appendages in their designated spaces – not hanging out the windows, and not hanging out in the aisles.

Wow, Mama’s bizarre notion that sitting at the table means sitting FACING FORWARD – lest we greatly increase the chances of stray crumbs going all over the floor – is also relevant to life outside our crazy prison-state of a home! (Not that I think my husband and I run our home like a prison state, but I get the distinct impression that our daughters sometimes think so.)

Back in my life before parenthood, I used to teach adolescents and young adults. Since most of the subjects I taught had zero direct applicability (on the surface, at least) to their future hopes and dreams, I had to overcome a lot of resistance from my students on why they had to bother learning what I had to teach them. I quickly learned that getting them to buy into the process – by explaining how decent writing and argumentative skills can help with everything from writing school application essays to drafting a cover letter for an internship or job – was essential if I wanted them to care the slightest bit about what I had to teach them.

Well, apparently up until this point, Mama’s Crazy Rules had been abstract concepts to my girls. But suddenly, Kimmie has a new appreciation for why mastering these basic concepts of civilized behavior is a good idea. Not only will doing so keep Mama happy, but it also means she gets to ride the bus! – that cool big-kid privilege she’s been looking forward to for years.

And if she doesn’t ride the bus, she doesn’t go to school. As I’ve explained point-blank to Kimmie, I can’t drop Essie off at preschool for 9:00 a.m. if I need to drop Kimmie off at the same time across town, just because Kimmie missed (or got herself banned from) the school bus. Alas, my girls got the basic human model of Mama, not the superhero version. 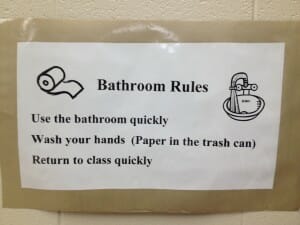 Kimmie’s newfound respect for Mama’s rules was still at the front of her mind when we went to Preview Day at school a couple of days later. Our district sets aside a morning, a few days before the official start of school, for kids to find their classroom and meet their teachers. And lo and behold, all over the place we saw signs with more rules to follow – rules that sounded an awful lot like the ones we have at home.

My favorite was the set of bathroom rules about doing your business in a timely manner, washing your hands, and getting back to where you’re supposed to be without delay. (In other words, reading an entire stack of books while you’re in there is not the optimal choice.)

Life in coexistence with others is full of rules, and I suppose school is where most of us start to learn about these unspoken norms of human behavior. It’s nice to see that being at school – and even getting to ride the bus – will give my offspring a new level of respect for the actions and behaviors we’ve been practicing at home.

Meanwhile, Kimmie approaches staying seated at the table during meals (facing forward) with newfound zeal, now that she knows what she has to do in order to ride the bus with the other big kids.