Why The 25 Percent Rule For Housing Is Your Family’s Best Friend:

How much do you spend each month on your housing expenses? If you’re following a family budget, chances are good you’ve done the math. But if you’re like many families in today’s economy, you’re probably still spending way too much on housing:

The problem with this is that the more you spend on housing, the less you have left over for everything else in life. Meaning it’s a very short and slippery slope to massive debt at best, or complete financial ruin at worst.

Fortunately, this is where the 25 percent rule – and variations on this theme, like the 28% rule and the 30% rule – come in. 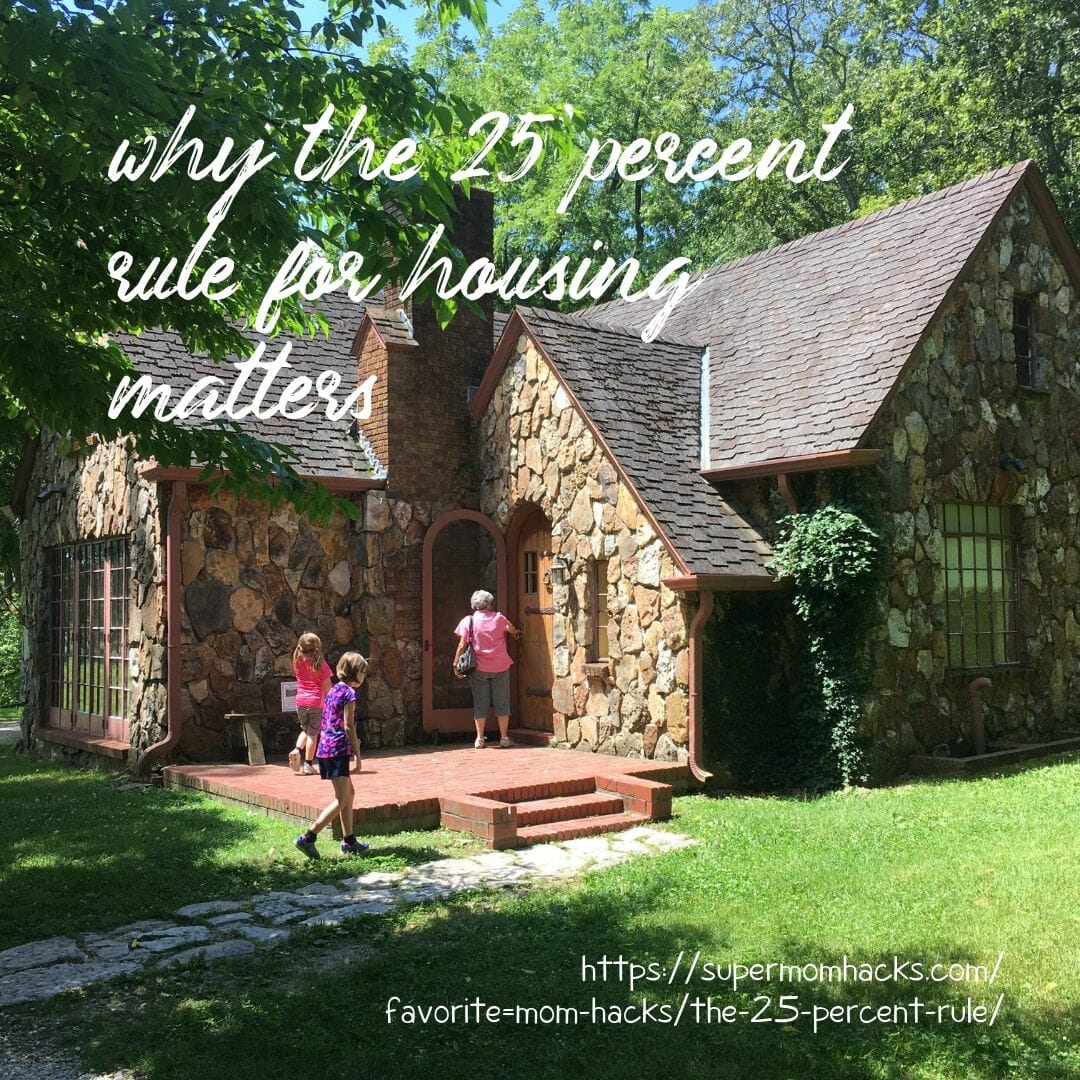 This is a collaboration post. However, please know I stand behind everything written here, and only include links to products/services/resources I’m willing to recommend personally.

The concept behind the 25 percent rule is relatively straightforward. If you’re spending more than 25 percent of your income on rent or mortgage payments each year, then you’re paying too much. Going above 25 almost guarantees that you’ll go into debt at some point, taking out a personal loan or credit card to cover bills and expenses. Relying on credit for everyday things is not what you want. “Just scraping by” shouldn’t be your default position.

Recently, a worrying statistic emerged: More than 63 percent of Americans couldn’t come up with $500 to pay for something unexpected, like emergency dental treatment. That statistic means that half of the population is living from paycheck to paycheck, maxing out the financial resources available to them.

Just stop and think about that for a moment.

Part of the problem is that people are not obeying the 25 percent rule. They’re living in housing that they can’t afford, and getting into financial trouble as a result.

Finding Your Next Place To Live

Now, I realize a lot of people literally cannot afford to follow this rule, based on their current life circumstances (job, spouse’s job, proximity to family, etc.)

But I also want to give you some food for thought, if you find yourself drowning in housing costs and can’t figure out how to get your heads (and your family budget) above water.

Granted, it doesn’t seem fair that housing prices should go through the roof just because housing is in short supply, when I know your paychecks aren’t doing the same. (At least, that hasn’t happened in my family – or to any other families I know! So I could be wrong, but I’m guessing that I’m right on the mark – yes?)

So this is where most of us are at: housing costs way more than we can realistically afford, if we’re trying to follow that 25% rule.

What can you do about it? Here are a few suggestions:

Make Major Life Decisions Based On Cost Of Living

I know, this one may be near-impossible for a lot of people. But hear me out:

The reason my husband and I can afford our current home, without being housing-poor, has a lot to do with the fact that he accepted a job in a part of the country that has relatively modest housing costs to begin with.

This is why he could buy his first home with almost no down payment, at a cost he could afford. There was no housing bubble where he lived; that modest home value stayed modest, when those in other parts of the country were skyrocketing. So by the time I came on the scene, there was no crash, and he was able to sell that home for a modest profit.

Moreover, he didn’t own a car for his first several years in this small city. He got around by bike or bus when he needed to, and could walk to and from work each day. That alone saved him thousands of dollars (and got him exercise to boot.) And these were more decisions he very consciously made when first applying for, and later deciding to accept, that job offer.

The total cost of living should be a major consideration at every step of a young adult’s life. Sure, I know a few people from my college days who went off to work for Wall Street firms and started pulling down salaries I’ll never see. A huge six-figure salary (or even an upper five-figure one) right out of college won’t go very far if you’re spending a huge chunk of that on housing costs each year, for the privilege of living in a fancy city in the hippest zip codes.

Likewise, going to undergrad in a big city may seem like fun. But if you have to spend four figures each month for off-campus housing – a cost most likely not included in your financial aid package – then how affordable will this school really be in the long run?

Factor In All The Costs

Next, think through all the different costs as you choose where you want to live (or move to), and whether you can realistically afford to live there. Using rent reports like this can help you find your family’s next great apartment, if you’re not yet in a position to buy.

And when you’re thinking about housing costs, don’t forget to look beyond rent. Commuting costs, utility costs, childcare costs, grocery costs, and weather-related costs are a few of the things you’ll need to factor in as you think about the next place you want to live and work, especially if your family is contemplating a move to a different city or state. Being out in the suburbs may seem great as far as lower taxes, more space, and better school districts go. But if it means you or your spouse will spend several hours commuting each day, is the cost worth it?

In situations like this, especially if one of you is changing jobs, it’s super-important to look into whether you can telecommute at least one day a week. I recently got to have dinner with a dear friend from undergrad, Laurel, who switched jobs about a year ago. She lives in Minneapolis, where her old employer was located. Because she wanted a change, she took a new job doing the same sort of work for a New Jersey-based company. But she still lives in Minneapolis. She telecommutes full-time in part because her housing costs are so much more affordable.

Likewise, our neighbor Linus works for a large corporation across the country from where we live. He travels for business maybe once every month or two, for face-to-face meetings. Otherwise, he also telecommutes. He benefits from our area’s affordable cost of living, he is able to live near his extended family (thus saving them a ton on childcare), and he’s also able to get his kids on the bus in the morning while his teacher-wife is already working. He’s even PTO treasurer and on our neighborhood board of directors – things he wouldn’t have time to do if not for telecommuting.

Saving money is always a challenge. As human beings, we always prefer getting stuff today than tomorrow. It’s in our nature. The trick to successfully reducing living costs is to understand that there’s still plenty in life to enjoy without spending thousands of dollars per month on accommodation. What’s more, the increased financial freedom could have profound benefits for your personal wellbeing and that of your family.

Here are some ways you might consider this as far as your housing costs go:

Have you considered downsizing?

But there’s a reason the tiny house movement is having a moment right now. Not only is a life more focused on experiences than acquiring stuff more appealing for many younger families, but it also has the potential to be a lot more affordable.

So the next time you’re considering simplifying your life, trimming your budget, spending less on housing, or all of the above, ask yourself if cutting back on the amount of house your family needs could help you meet these goals.

If you enjoyed this post on why the 25 percent rule for housing matters, why not share it with others by pinning this image? 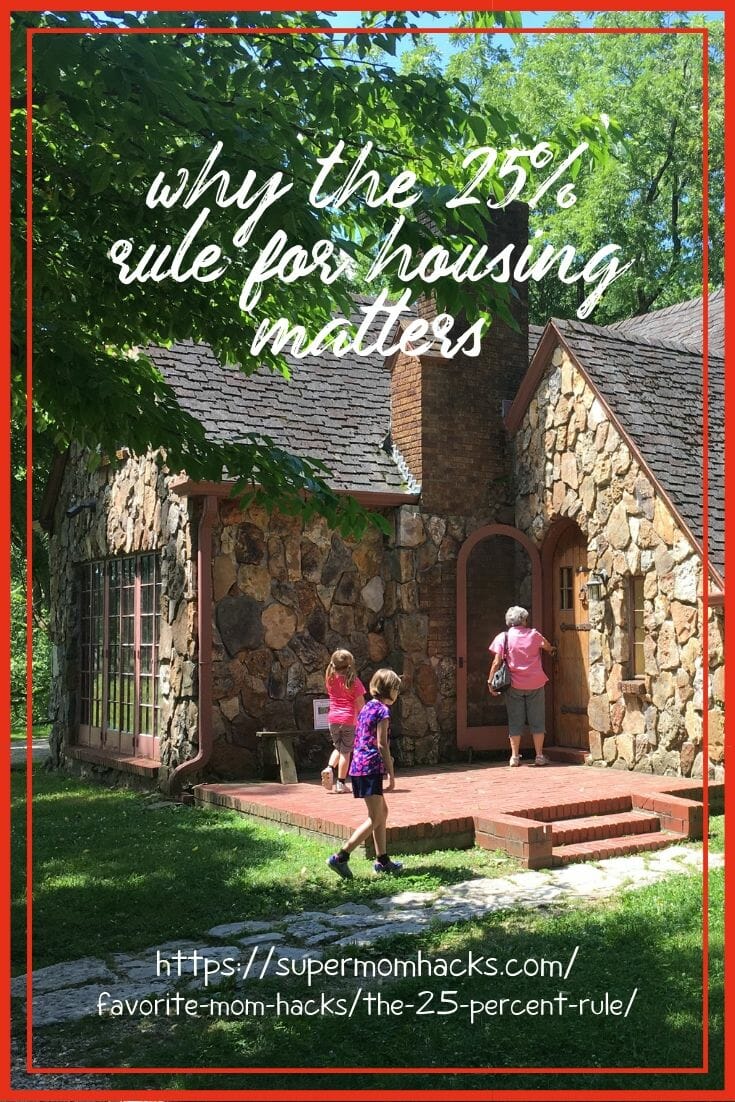