How To Cut Your Cell Phone Bill and Avoid Monthly Over-Limit Charges:

Most adults have at least one smart device with a data plan these days. Add in other family members, and you’ve got even more devices. And as the number of devices multiplies, your monthly cell phone bill can quickly skyrocket out of control. That’s why I want to share my family’s top tips to save on cell phone bills.

True confession: until we learned about #2 and #3, my husband and I could not afford the monthly expense of smartphones in our budgets! As such, we were relatively late adopters. But we now use all three of these hacks to keep our monthly bill for 4 smart devices between $50-$80 per month, total.

Can you say the same for YOUR family’s mobile plan?

Honestly, these tricks are some of our favorite ways to save money on cell phone bills, month after month. Want to learn our secrets? Then read on! 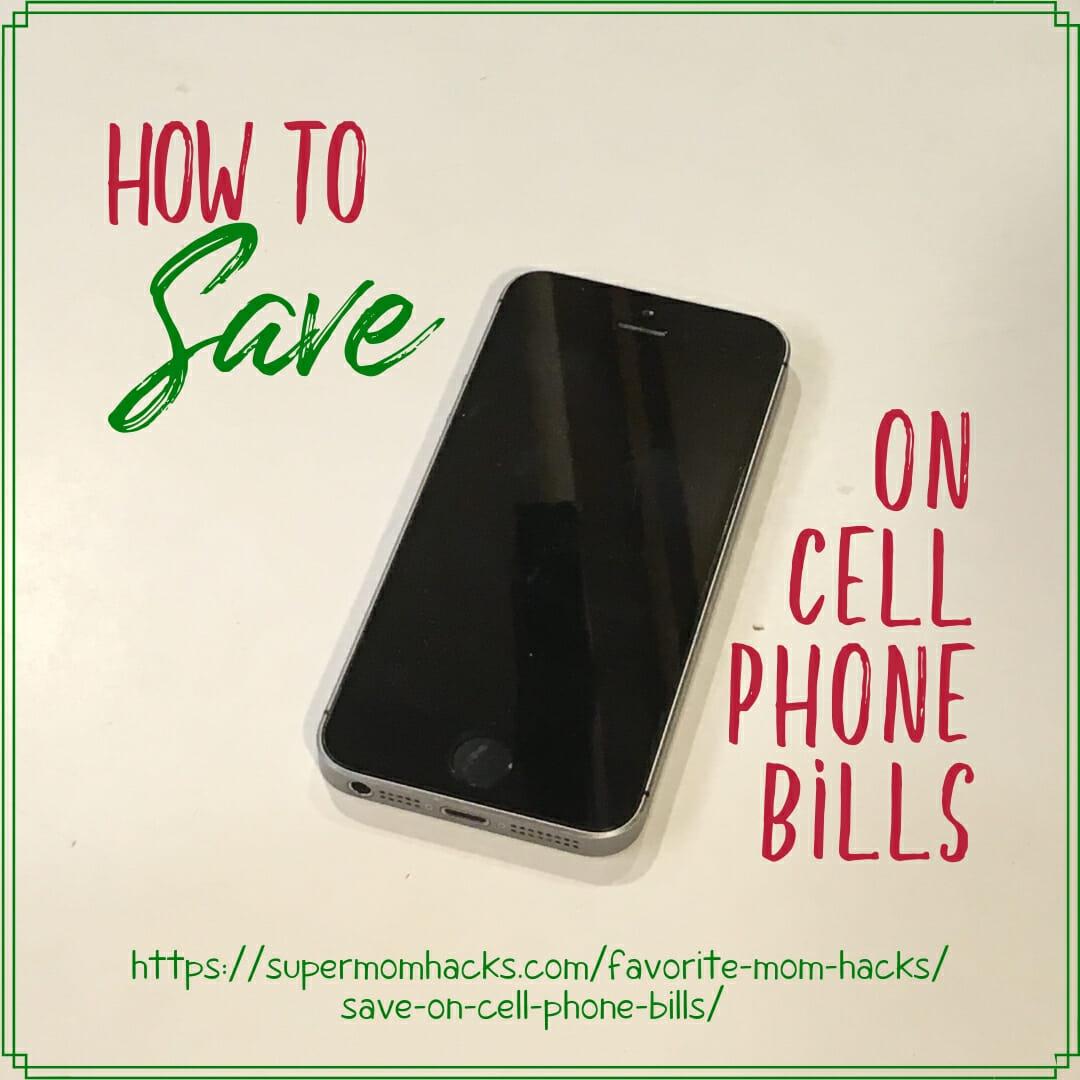 Three Easy Ways To Save On Cell Phone Bills:

Have you heard about the Wait Until 8th pledge? Our family has committed to it, and I spread the word whenever I can. It’s a commitment to let our kids be kids for as long as possible, by agreeing NOT to give them their own smartphones until 8th grade.

We think this commitment makes a lot of sense. Thanks to various grants, our economically diverse school district now provides every student with a school iPad for schoolwork, so our kids and their friends don’t “need” a smartphone to do homework or research.

While we have the option to let the girls keep their school-owned devices over the summer, we have so far chosen not to. Our girls already show enough signs of addictive behavior if we let them spend too much free time on their school iPads, That’s why we think it’s important to preserve their childhood for them, by removing that temptation over the summer.

Why should your family consider this?

Well, for starters, researchers have established links between heavy social media use and higher rates of depression among young people, That’s enough reason for me to think long and hard before giving my kids an expensive “smart” device any earlier than necessary.

No wonder many leading tech executives don’t allow their own kids to have smartphones until they’re 14!

But this commitment to hold off on smartphones until 8th grade works best if you get other parents to sign onto it with you. So reach out to your neighbors, your friends, and your kids’ friends’ parents, and urge their families to commit alongside yours. If your kids’ friends don’t have smartphones, either, your kids will spend a lot less time begging you for one! There’s even a ton of resources on their website to help you get the word out!

Even if you don’t sign the pledge, consider putting off adding a child to your cell plan for a few years. You do the math. I’m betting for each child you put off till 8th grade, you can save at least a hundred dollars per year, if not more.

When Dear Husband and I decided in 2014 that we could no longer avoid smartphones, we did a lot of research among friends to see what carriers they used, how happy they were with the service, and how much they paid per month. We were unhappy with both the cost and the poor customer service for our then-service provider for our two flip-phones.

And we knew we could not afford smartphones unless we found something less expensive. We’d done the research. We knew that if we stayed with our then-provider when ditching our flip-phones for smartphones with data plans, our monthly cell phone bill would double (from about $80 to about $160).

Since we were both beyond our two-year commitments with our then-provider, DH and I knew we could switch providers at any time. But when one of DH’s grad school friends told him about Ting, we were skeptical. Frankly, it all sounded too good to be true:

And even better, they recently made calling to a bunch of other countries included as part of their regular monthly minutes! That means I can call my dear friend Raiah in Canada all I want, without incurring extra fees for calls to non-US numbers!

And (though we were going to upgrade to smartphones anyway), we learned we could keep our existing phone numbers AND our existing devices, if we wanted. Amazing.

So how do Ting’s bills work?

You can use Ting’s bill estimator to get a sense, based on your family’s current usage, of what your bill might look like. But the short version is, you pay a flat $6 per device per month. After that, you get put into small, medium, large, or XL “buckets” depending on how many collective text messages, phone minutes, and megabytes your family uses per month. Most months, we’re at “small” for text messages, and “large” for phone minutes and data.

You can even set up alerts, say, if you’re at 950 minutes (1000+ minutes puts us into the “XL” category for minutes, at which point our bill jumps). If I’ve been doing a lot of work from my “mobile” office, or phoning my mama a lot, this will often push us toward those XL buckets. We get an alert, I modify my usage if I can, and we keep our bill in check. Easy-peasy.

For example, we were both away from home for a good chunk of this month, meaning our data usage is much higher than usual. I can see this in real-time by logging into our Ting account. With our travels done, we should use a lot less data between now and when our bill closes – and yet our total bill to date is still quite modest:

But even if we have a usage-heavy month, whether because of a lot of family calls or lots of travel (and thus lots of data), our bills today are STILL about what we were paying for two flip phones, five years ago, with NO data. Most months, it’s less. And that’s with FOUR devices – my husband’s iPhone and iPad, and my iPhone and iPad.

What about customer service?

Although the hundreds of dollars we’ve saved since switching to Ting is our favorite part, their excellent customer service is a close second:

Ready to give it a try? When you sign up here, you’ll even get $25 off your first (already-super-low) bill! And since there are no long-term contracts, you can cancel at any time. (Though I doubt you’ll want to, anytime soon, if you’re as happy as we and all our Ting friends are…)

The one downside of Ting, if you’re used to more conventional phone providers, is that they don’t give you “free” phones every two years. (Read: they don’t pad their phone bills so that you pay off that “free” phone over the two years you’re locked into a contract.)

This is why you can bring your existing device(s) with you to Ting, as long as they’re compatible with the Ting networks (you’ll have to buy a new SIM card from Ting, but those are only around $10-$20).

But what if you don’t have an existing device – or you’re ready to upgrade to a new one anyway?

This is where the resale market comes in. The only time many “smart” devices go on sale is right before a new model comes out. On the other hand, there are tons of places you can look to buy like-new, refurbished, and otherwise “gently used” devices online, including

Why consider gently-used over new?

The only one of these services we’ve used is Glyde, which (along with Gazelle) was one of Ting’s recommended marketplaces when we joined Ting in 2014. Glyde is an online marketplace where people can buy and sell a wide range of iPhones and Samsung devices. (Though they no longer sell them on Glyde, I also got a practically-brand-new six-month-old iPad Air 2 there.)  And everything sold through Glyde (and generally through ALL of these sites) is guaranteed.

Buying a gently-used device from someone who’s obsessed with having the very latest model is a great way to save on tech:

True, having to buy your own phone (if you don’t have one) costs more upfront. But in the long run, you’re better off – especially if you forgo the latest shiny thing for a slightly-used device with plenty of life left in it. The various resale sites I’ve linked to above all sell a wide range of devices, including tablets/e-readers, and even laptops.

In our case, a smartphone plan with our previous provider (including two “free” phones) would have cost us about $80 more per month ($40 per device), while locking us into another two-year contract. But for what we paid for our “like new” iPhones from former online reseller Glyde (which was, I think, $800 or so total), our phones were basically “paid off” in less than a year. If we’d gone with our initial provider and “free” phones vs. Ting and gently-used iPhones, we would have paid more than twice as much over the course of our two-year contract!

How does it work?

Given our interest in NOT spending a lot of money when we upgraded to smartphones, Dear Husband and I were excited to check out the used-device marketplace. We had already researched which model iPhone we wanted. And after checking back periodically on the resale sites we were watching, we were each able to snag the model we wanted, in the color we wanted, barely a year old, in like-new condition. For about HALF what we would have paid for brand-new phones.

When we upgraded to newer models a few years later, we did the same thing – and saved just as much. The same was true when I bought my first iPad. That took a little longer, because of the color combination and features I wanted in what was then the latest model. But about 6 months after that model came out, I saved 1/3 off the retail price by buying a like-new one from a resale site.

And as for the guarantee: When hubby’s phone came without one of the chargers the seller had listed as included, he called the reseller and complained. They quickly refunded him part of his purchase price – enough to buy a brand-new charger.

What tricks has your family tried to save on cell phone bills? Have you used any of the tips I’ve mentioned here? Do you have others I’ve omitted? Let us know in the comments!

If you enjoyed this post’s tips to save on cell phone bills, why not share them with others by pinning this image? 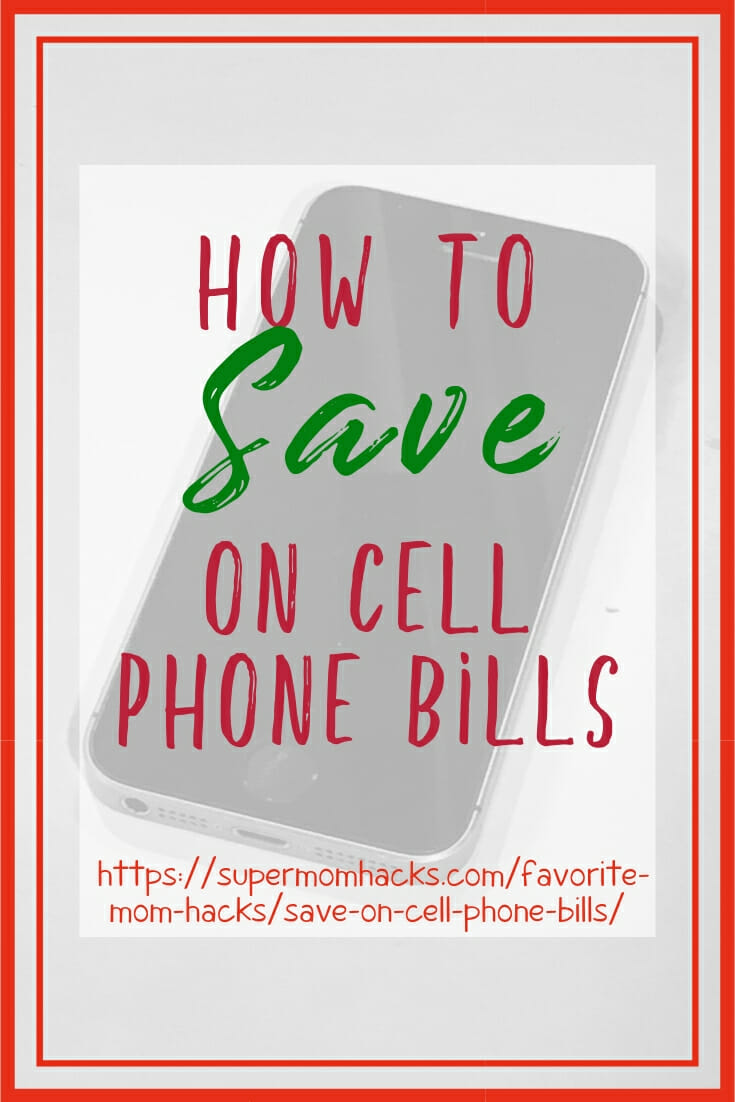 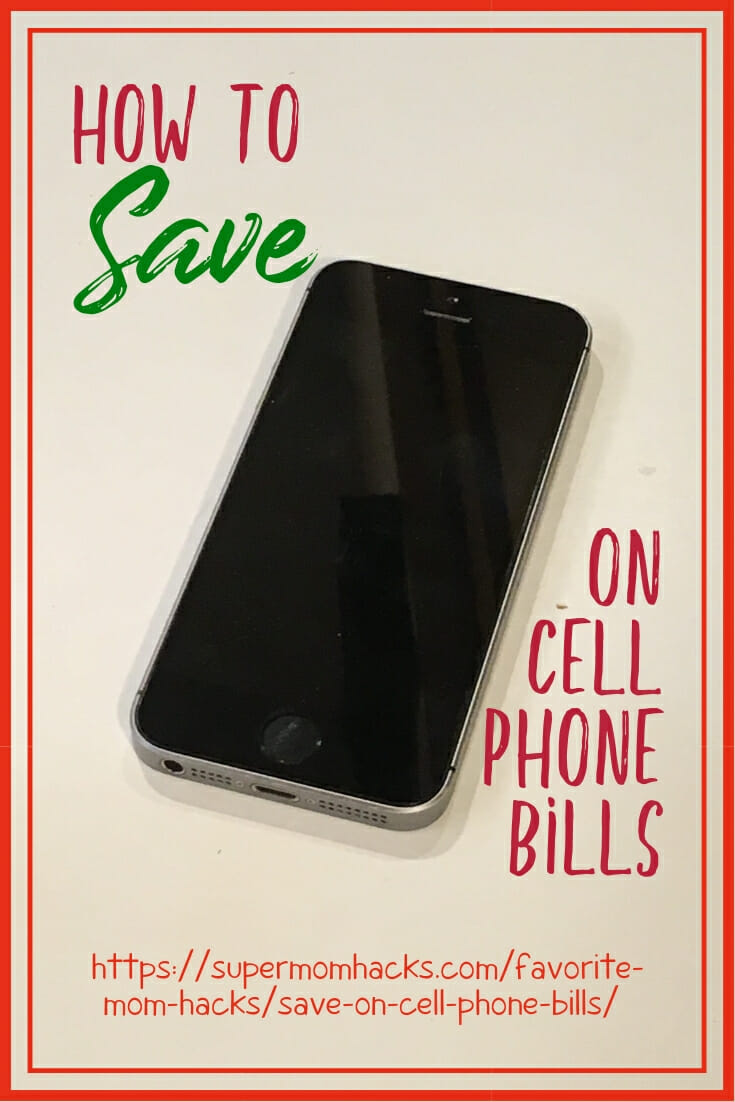