When does your family start thinking about Halloween? Me, I start hounding my kids for costume ideas over the summer. I love DIY costumes; having them take forever to make, not so much. Hence I was thrilled this past August when Essie announced she’d be a ghost for Halloween. How hard can it be to make a ghost costume?

Then Kimmie decided she’d be a ghost, too. Bonus! Make a ghost costume times two. How lucky am I? Can’t get any simpler than that. Two white bedsheets, here we come. 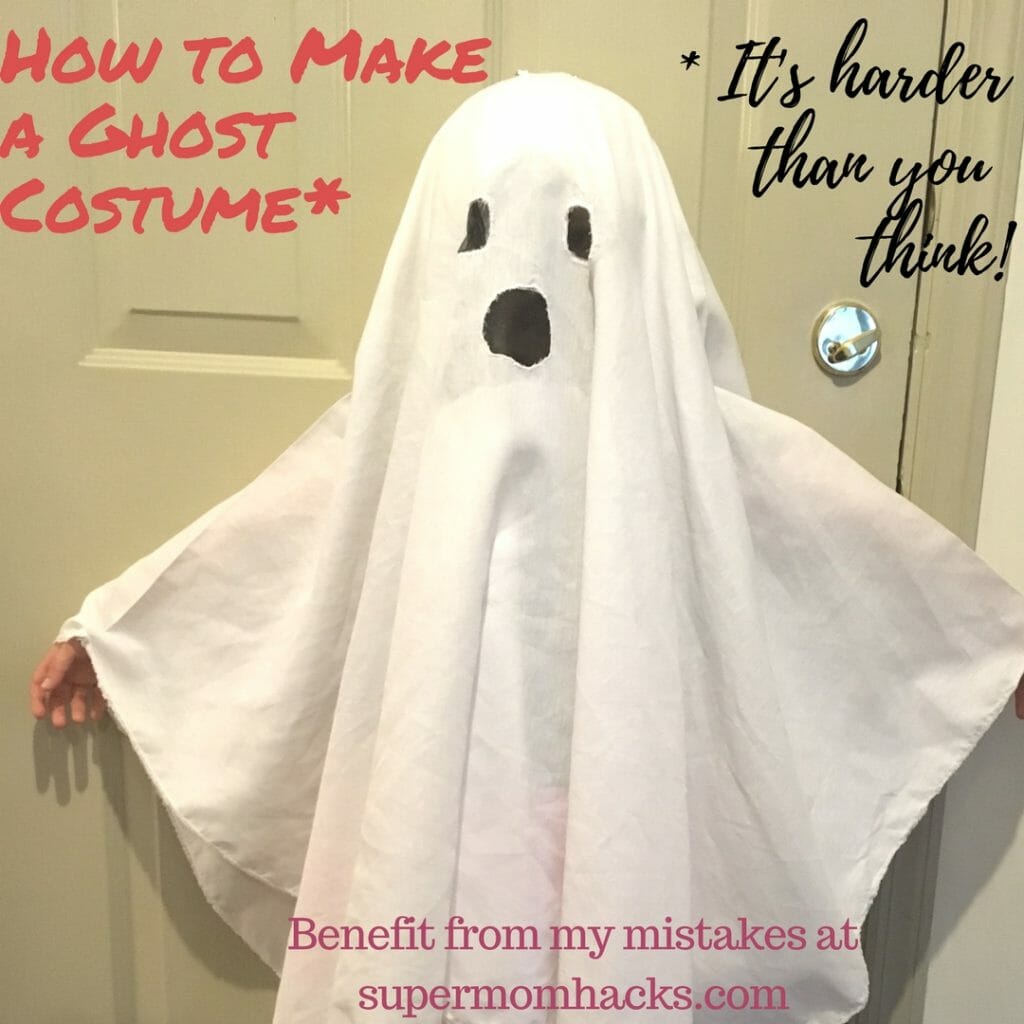 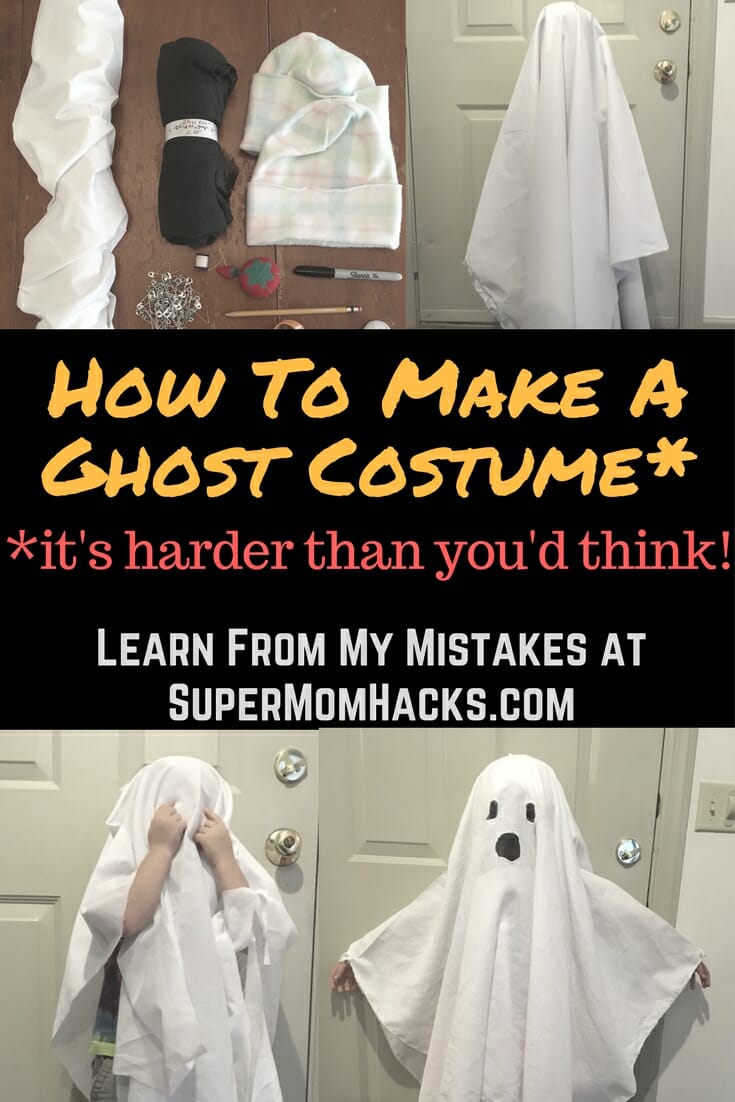 September: Get ready to make a ghost costume x2

Our corner of Suburbia U.S.A. has not one, but two thrift stores within a mile of our house. My mission one September morning, after getting girls off to school: Find two white sheets. 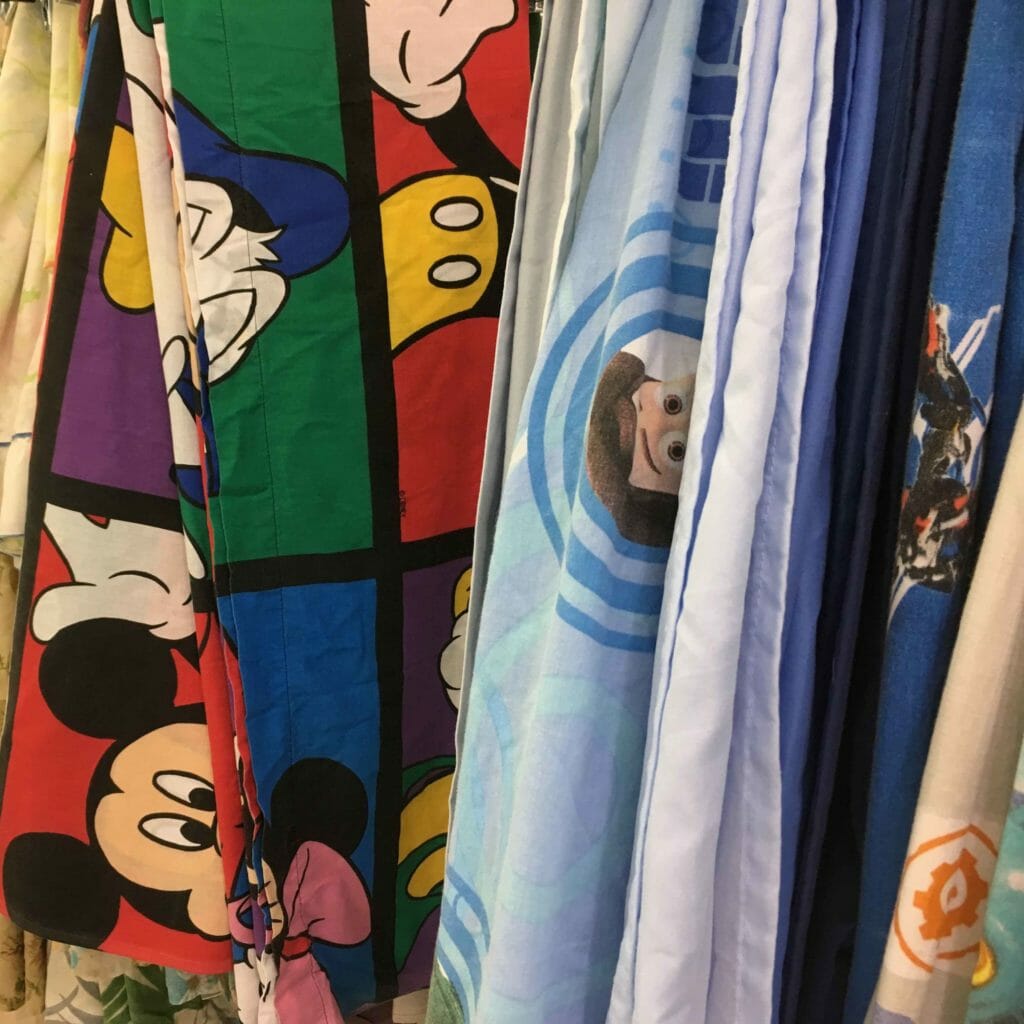 Of course I found every color of sheet except plain white. I suspect a cartoon-character-printed ghost costume isn’t going to cut it. 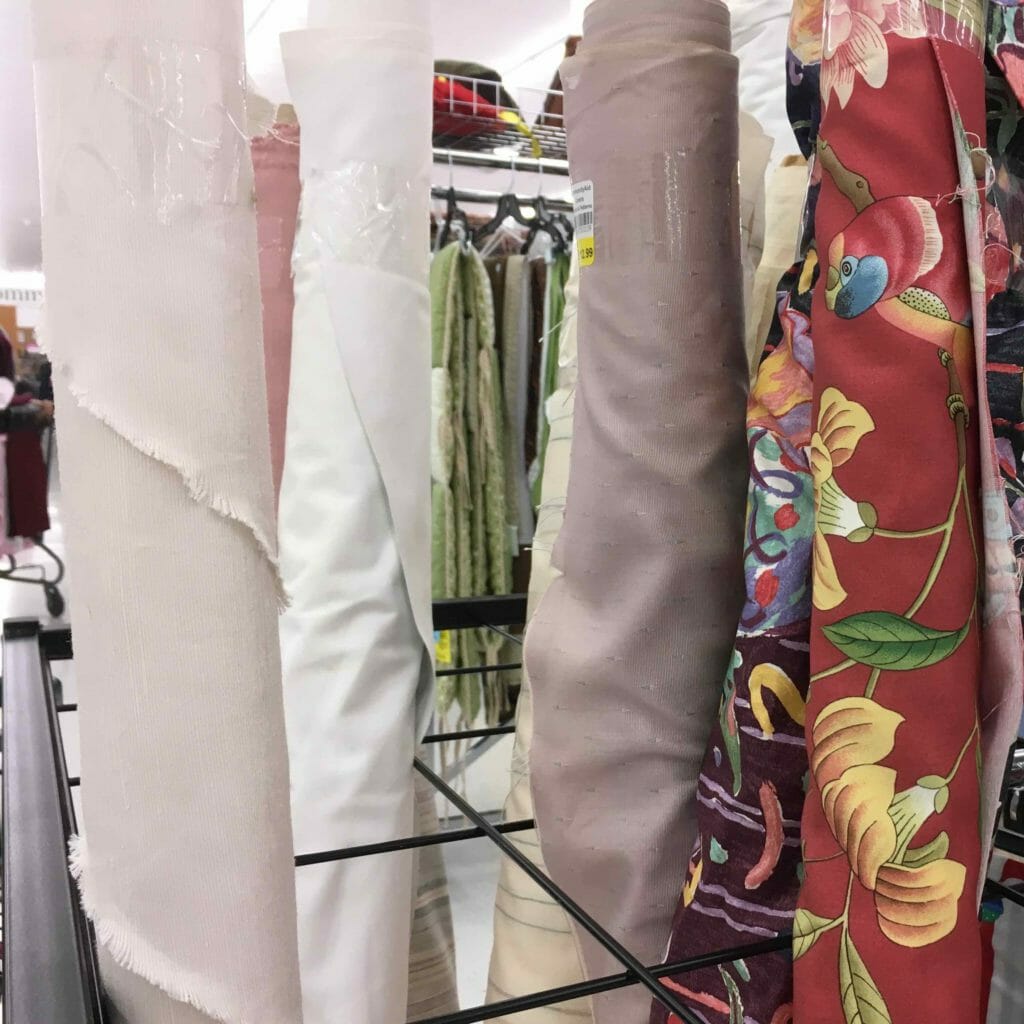 But even better, I found an entire bolt of white fabric! Since it was Half-Off Day, $7.50 later (surely the $15 original price means there’s plenty of fabric for two ghost costumes, right?) I was on my way. That was almost too easy.

One reason I like lots of lead time for making costumes is so I can stick them on the mental back burner, until I figure out a good way to accomplish the desired effect.

But the more I pondered the bedsheet-with-two-eye-holes-cut-out scenario, the more I realized it was going to be harder to make a ghost costume than I’d imagined.

Think about it: How do you know where to cut the eye holes? And once you’ve got them cut, how do you get them to stay in place on the kiddo’s head while the kid is walking around?

So I began hunting online for instructions on how to make a ghost costume. This site has the best step-by-step directions I found for Ye Olde Basic Sheet-Based Ghost Costume That Won’t Fall Off. (The secret is attaching a light-colored hat inside the head part of the sheet; the hat is what holds the costume in place and keeps the holes where they belong.)

By now it was mid-September. Figuring I had this problem solved, I stashed the bolt of fabric in a closet.

But I still needed to find white hats. I briefly contemplated crocheting some with bulky white yarn while waiting in school drop-off and pick-up lines. Instead, I found a couple of pastel plaid fleece caps at the tail end of this fall’s Baby Consignment Sale event. Cost: about 25 cents each. Score again! 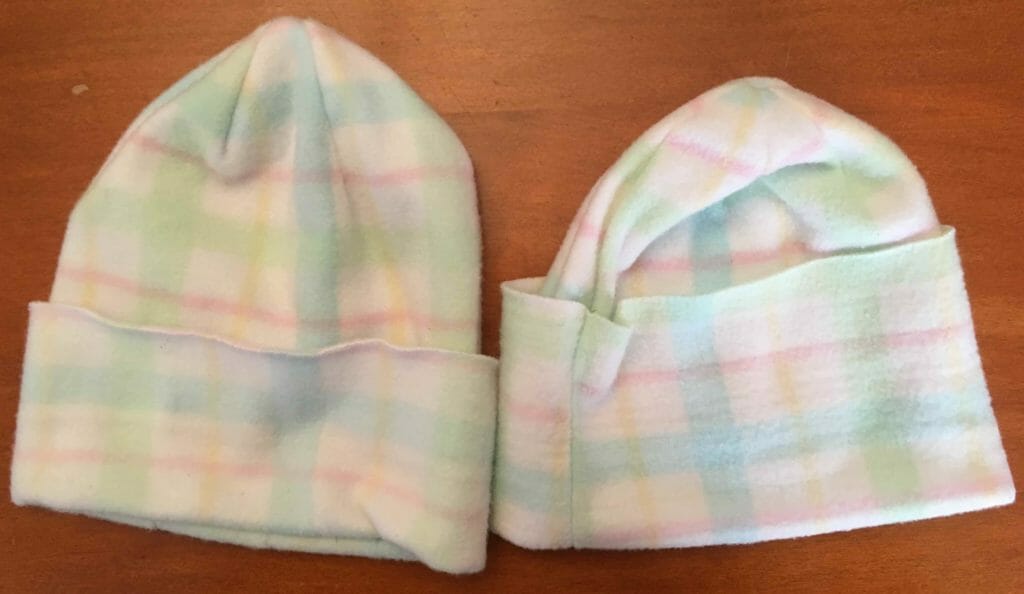 I also stumbled across some black cheesecloth at our favorite local secondhand craft-supply store. One of the websites I’d consulted on how to make a ghost costume suggested sewing black mesh behind the eye holes, so that the costume gives the appearance of black holes without having to paint big black circles around one’s eyes. 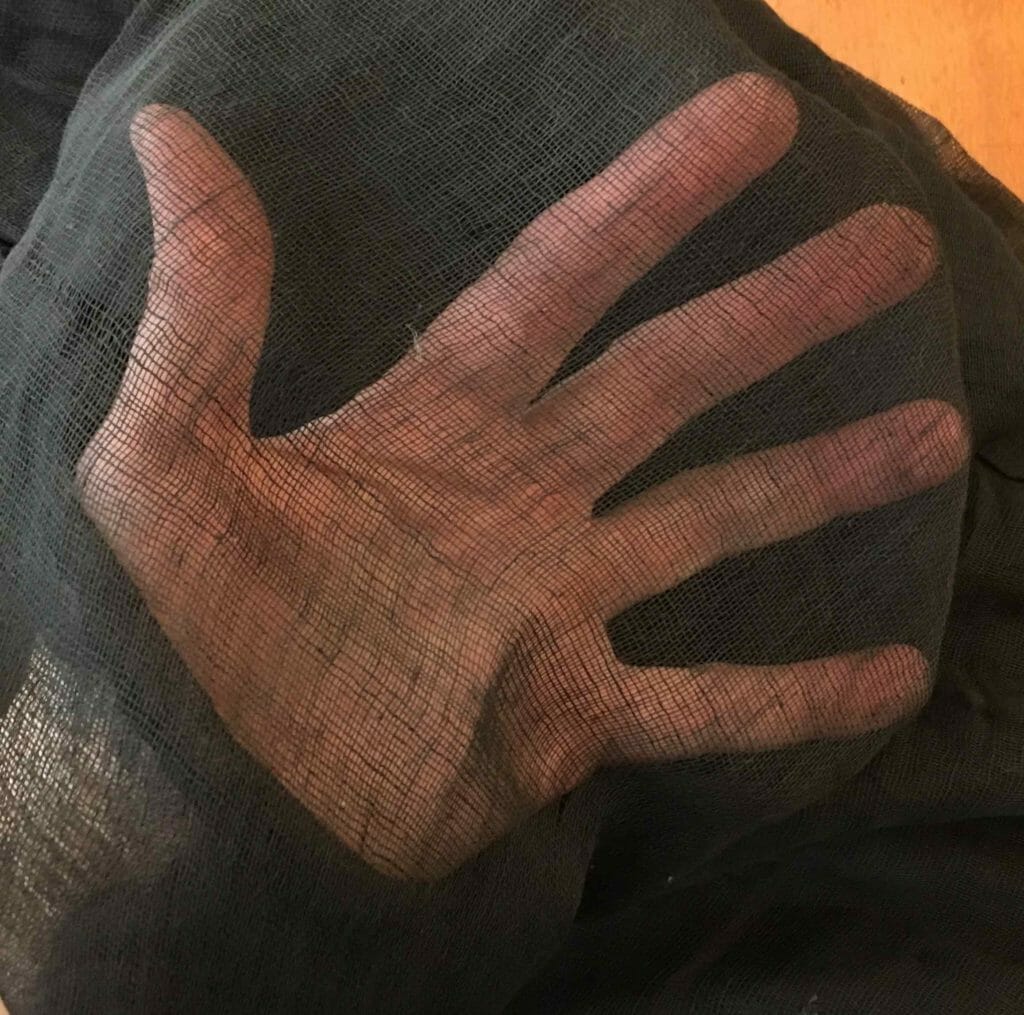 To me, sewing on black mesh sounds way easier than trying to apply (and then remove) eye-area black grease paint on a 4-year-old and a 6-year-old. Even though the bundle contained lots more fabric than I needed, at $2.25 it was still a bargain.

With three weekends remaining until October 31, I decided I’d better make the costumes already. So Sunday afternoon I cleared off the dining-room table and gathered my supplies, including some narrow white elastic; I figured I’d add some wrist straps to help hold the fabric in place. Then I cut the tape off the bolt of fabric, and unrolled it to see how much fabric I had. 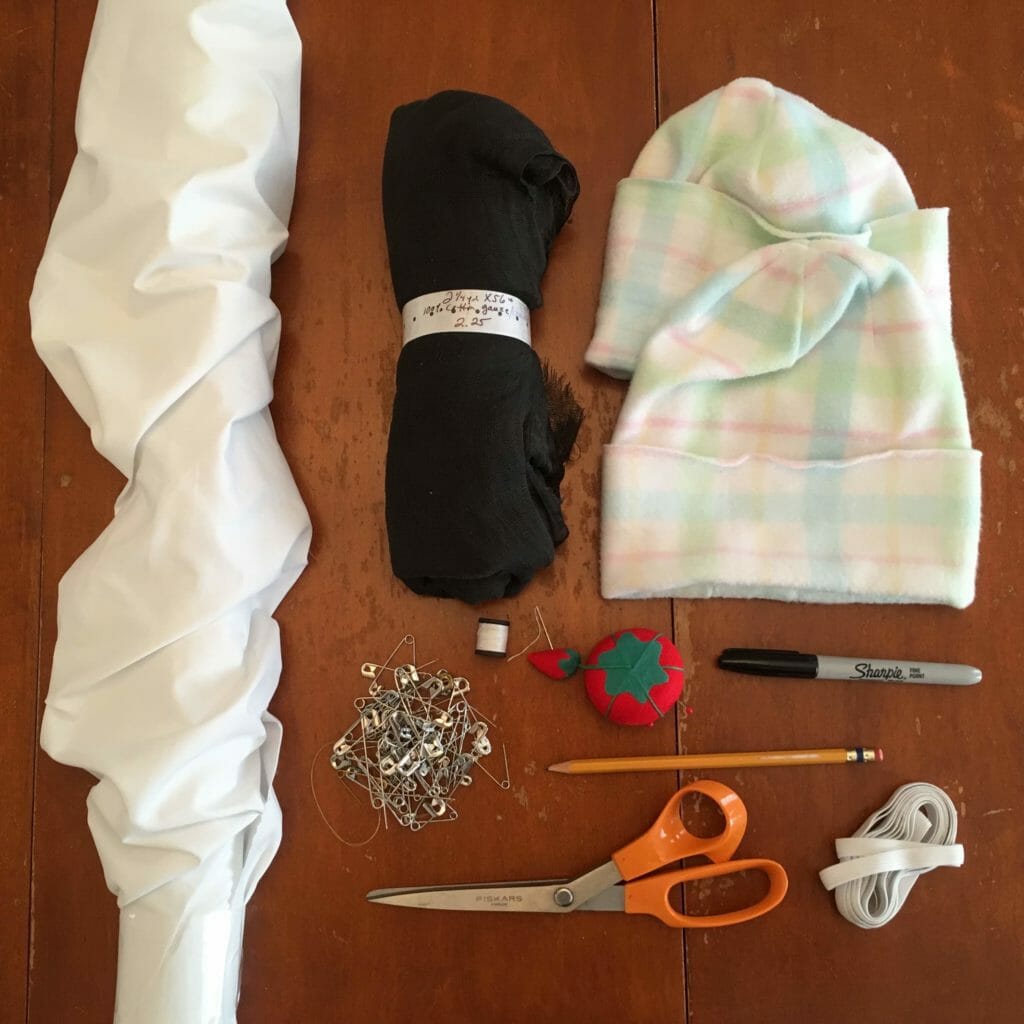 But this was my Chunk Of Time To Make A Ghost Costume x2, darn it! So I folded the hunk of fabric in quarters, marked the center, and hunted down Essie, who was playing in the living room.

Turns out, the optimal fabric size for a 40-inch-tall child’s ghost costume is less than [54 inches x 72 inches]. At its current size, the fabric would definitely drag on the ground at the corners. Yes, I could just trim off the corners – but in theory, good uber-thrifty type that I am, I’m going to repurpose each costume into linings for baskets or tote bags or something. So the less I cut the fabric, the better.

Next I hunted down Kimmie, who was in the basement indulging in Screen Hypnosis. She was not happy to have her Mulan/Mulan II binge-watching marathon interrupted by being asked to stand up and having a piece of opaque white fabric draped over her eyes.

But good news: the rectangle in question works much better on a 48-inch-tall child than a 40-inch-tall one.

Given the girls’ level of engrossment in their various activities and my own inertia, I decided that investing the rest of the afternoon in a trip to the nearest fabric store was not the best choice. So I packed everything away and got out a piece of paper.

Next thing I know, I’m sketching out rectangles of fabric and trying to remember the Pythagorean Theorem (you know, the formula used to figure out the long side of a right triangle) so I can figure out how much fabric I need to make Essie’s costume. 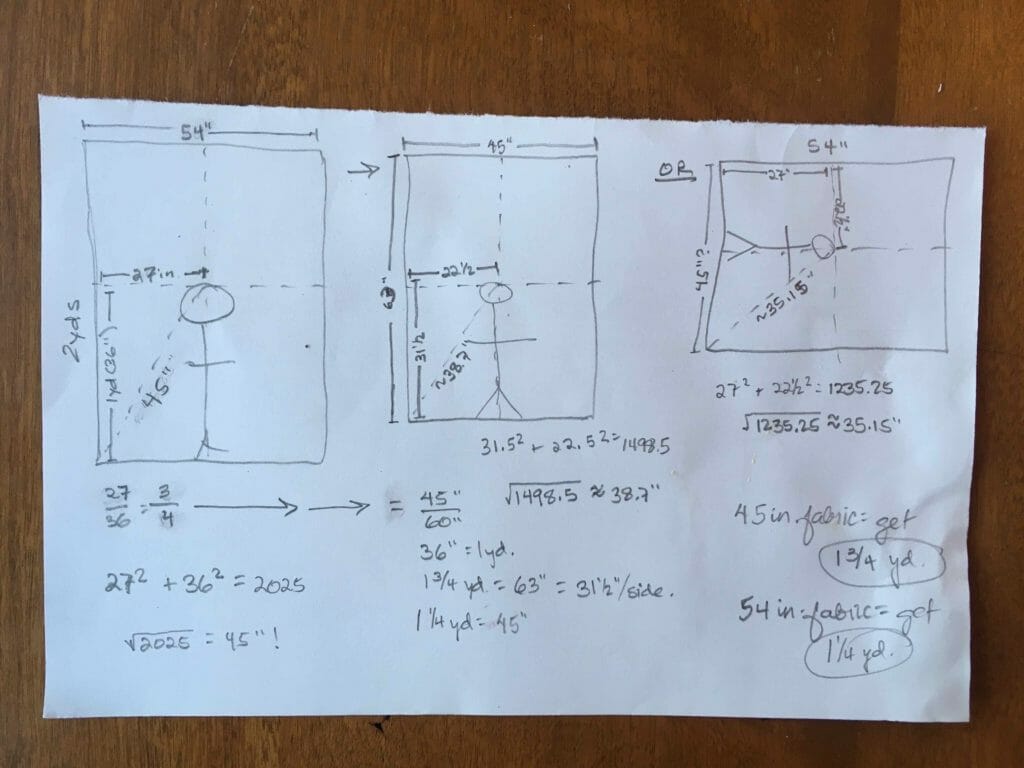 First stop after preschool drop-off on Monday: the thrift store a half-mile from home. They had several bundles of white fabric for a few dollars each. But the bundles were all taped up, the store doesn’t allow returns, and they also don’t generally allow you to un-tape bundled items before you buy them.

I convinced a salesperson to make an exception under the circumstances. After opening several bundles, I found one that looked workable. It even came with already-somewhat-uneven edges.

Brought the piece home to find it’s actually about 40 inches x 80 inches – not really wide enough, and too long. Cutting off some of the length and adding it onto the sides seems a better bet than having a big seam right down the middle of the thing, but still…

Guess I’ll be hauling out the sewing machine after all. I actually love to sew; I find it soothing and relaxing. But finding the unencumbered time in which to do it, without staying up half the night, is the challenging part.

So much for this being a fast-and-easy process. I eventually got Kimmie’s costume done in an afternoon, and Essie’s done the following afternoon.

2a. The actual steps to make a ghost costume

2b. Final tips and tricks 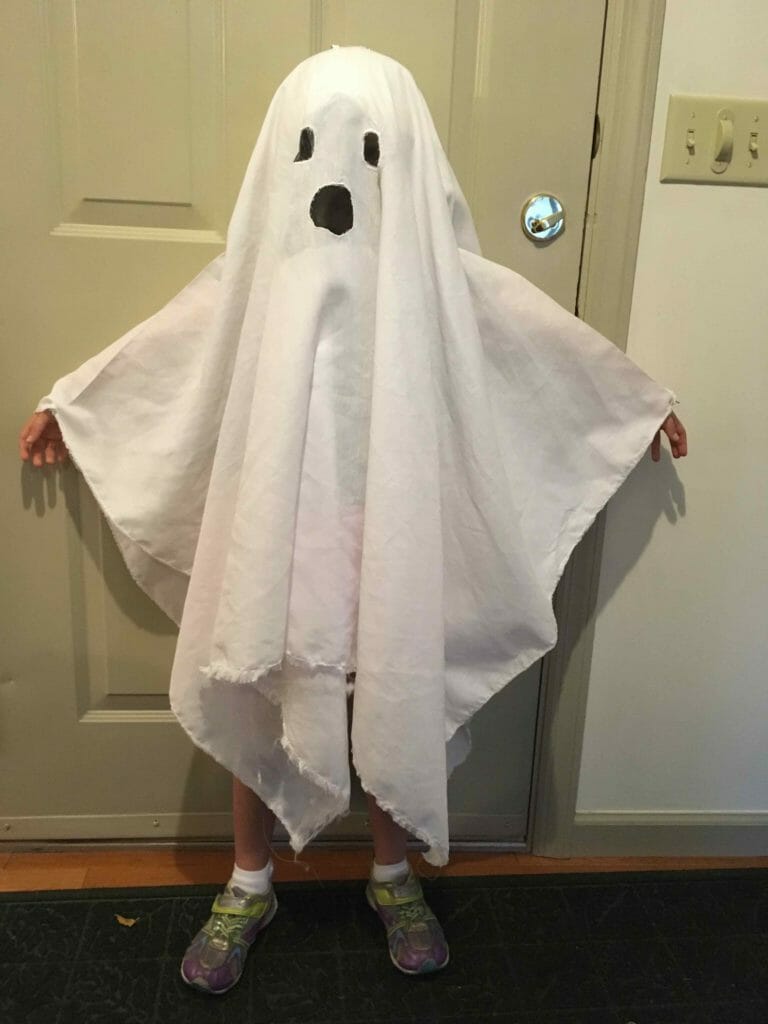 Are you making costumes for your kiddos this year? What was your most challenging DIY costume to date (especially if you didn’t peg it as such at the outset)? Let us know in the comments!

If you enjoyed this tutorial on how to make a ghost costume, why not share it with others by pinning this image? 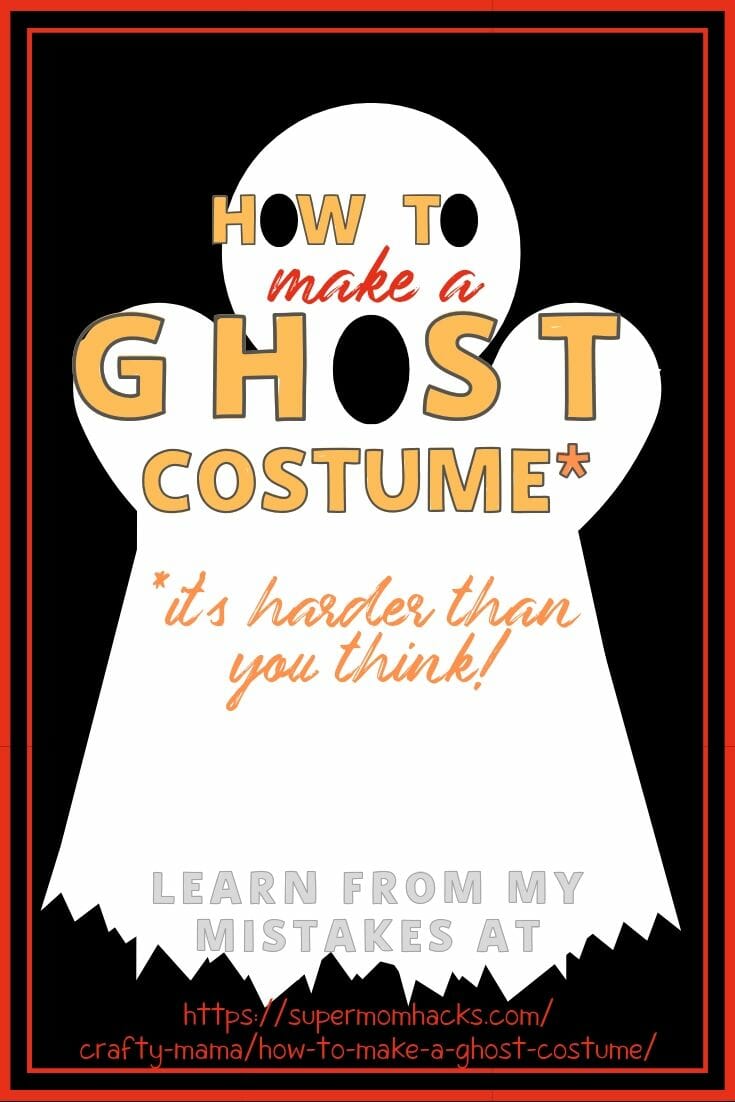 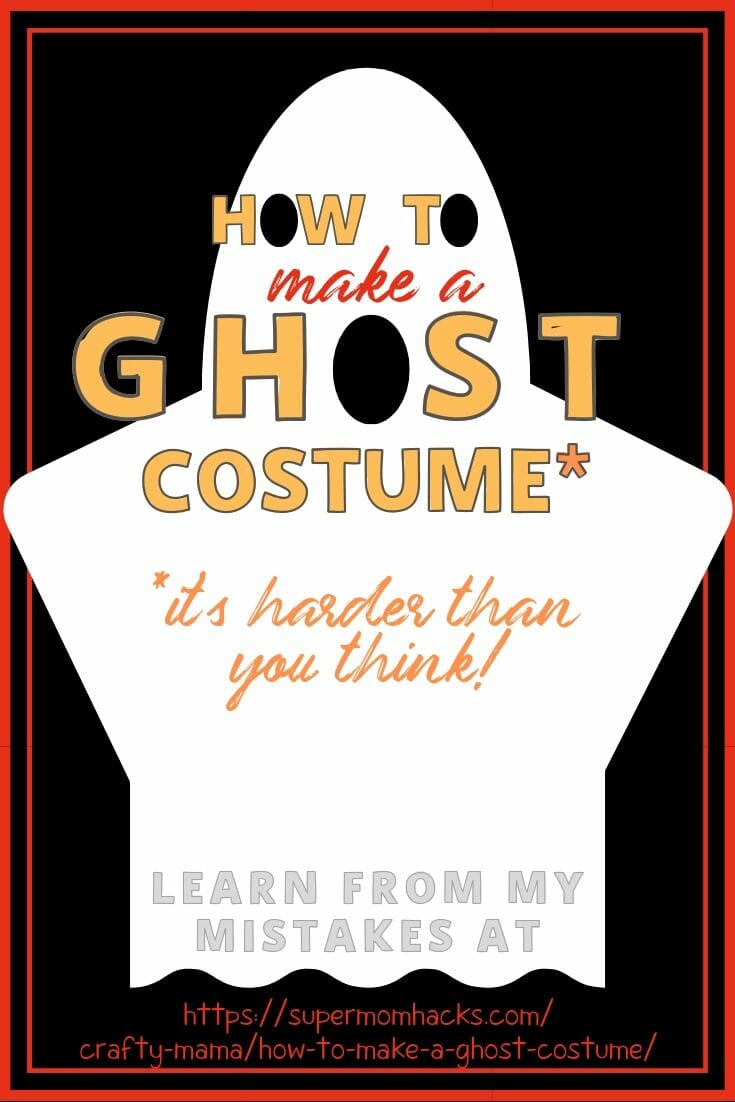 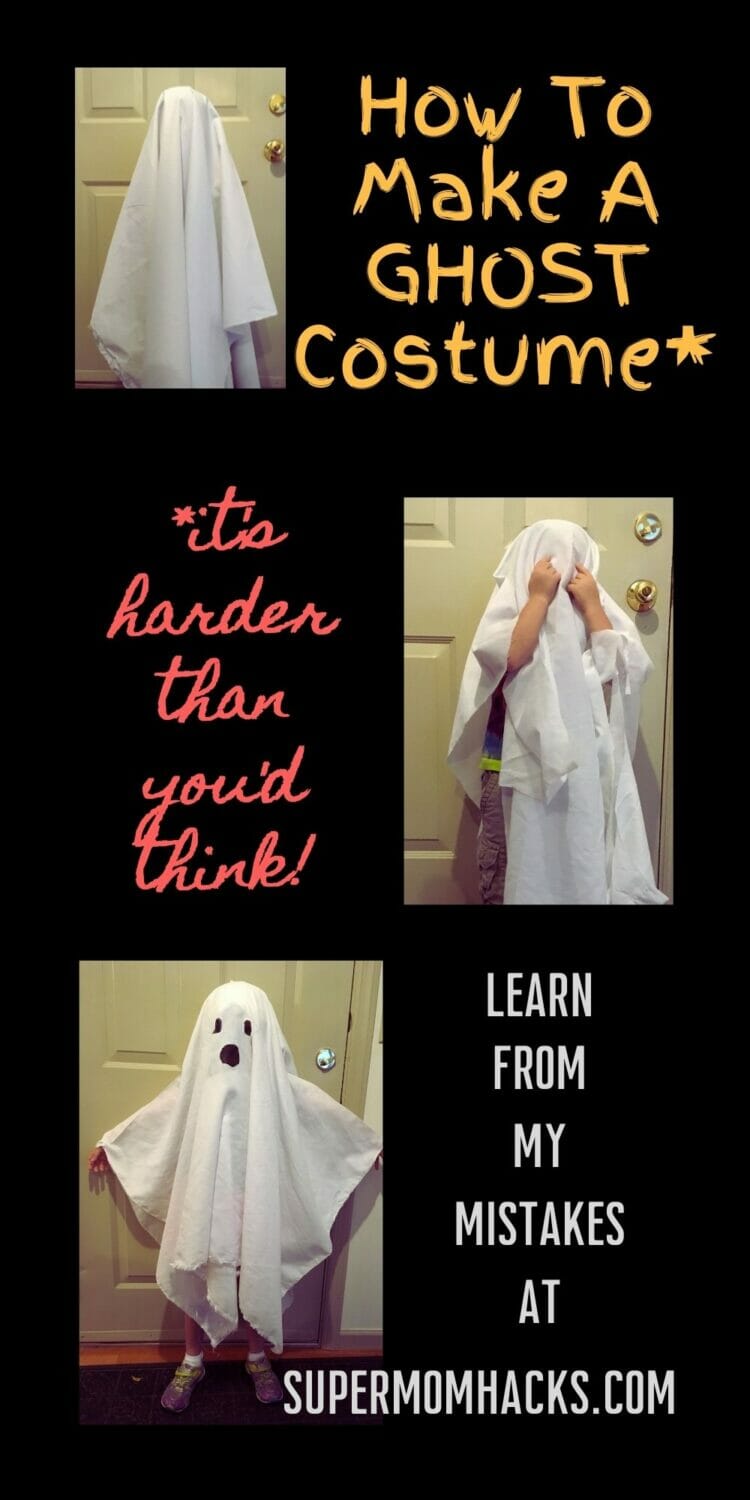