How To Avoid Tick Bites This Summer: Your Best Bet for Preventing Tick Bites

(Originally published May 20, 2017; last updated May 2020) Summer is just around the corner in the Northern Hemisphere. Are you ready to protect your kids from tick bites? 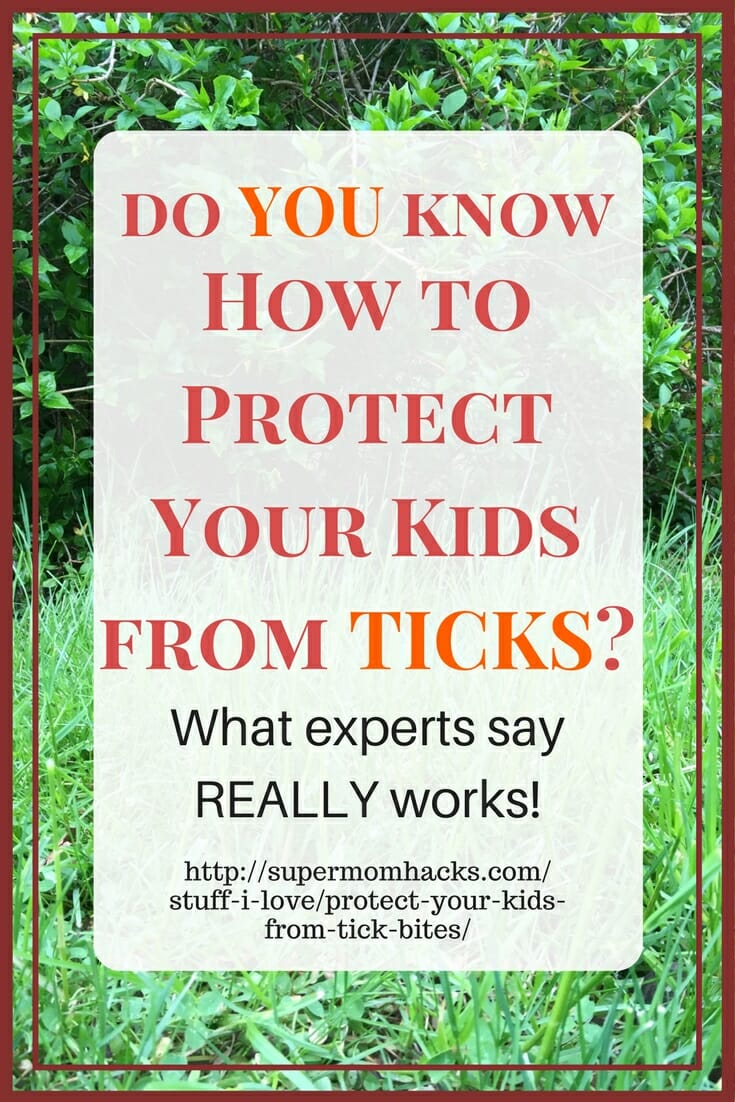 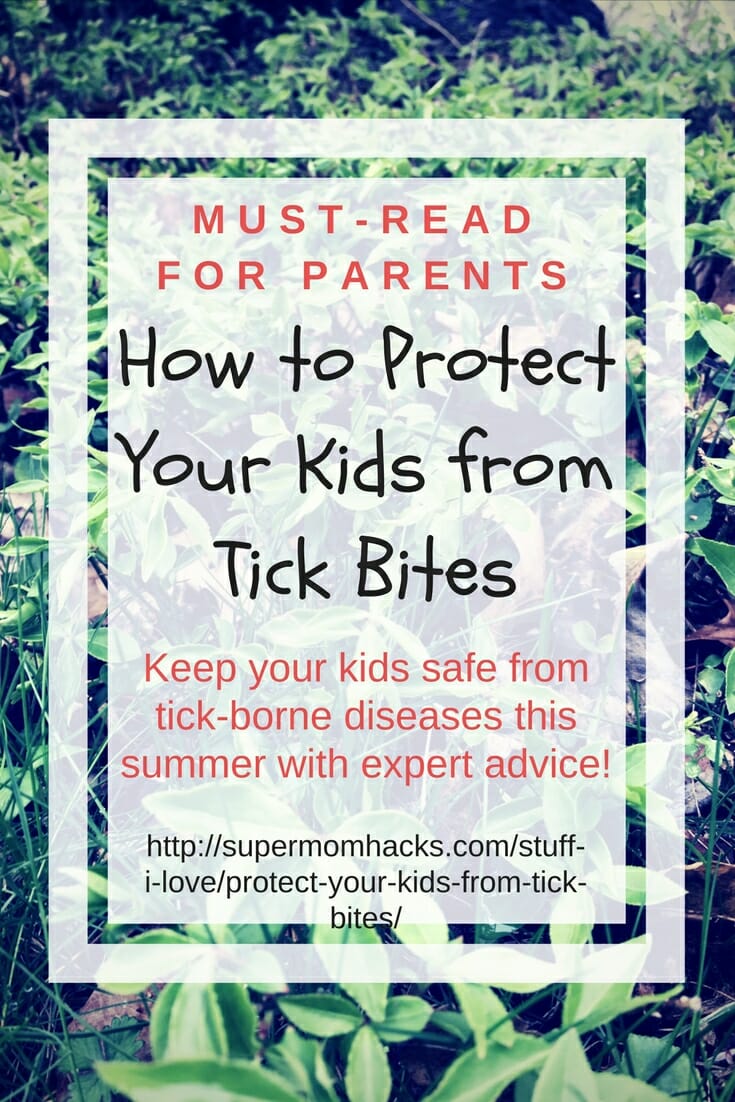 Since at least 2017, it seems that each spring brings fresh warnings from U.S.-based scientists about increased risks for Lyme Disease. As summers become hotter and wetter,

This is why scientists keep warning us of increasing dangers from ticks and the diseases they carry:

Ticks carrying other diseases (such as the cayenne tick in the image at the top of this post, and the similar-looking Rocky Mountain tick) can be found in all 48 contiguous states.

All this means that if you live in the U.S., you need to know how to prevent tick bites. 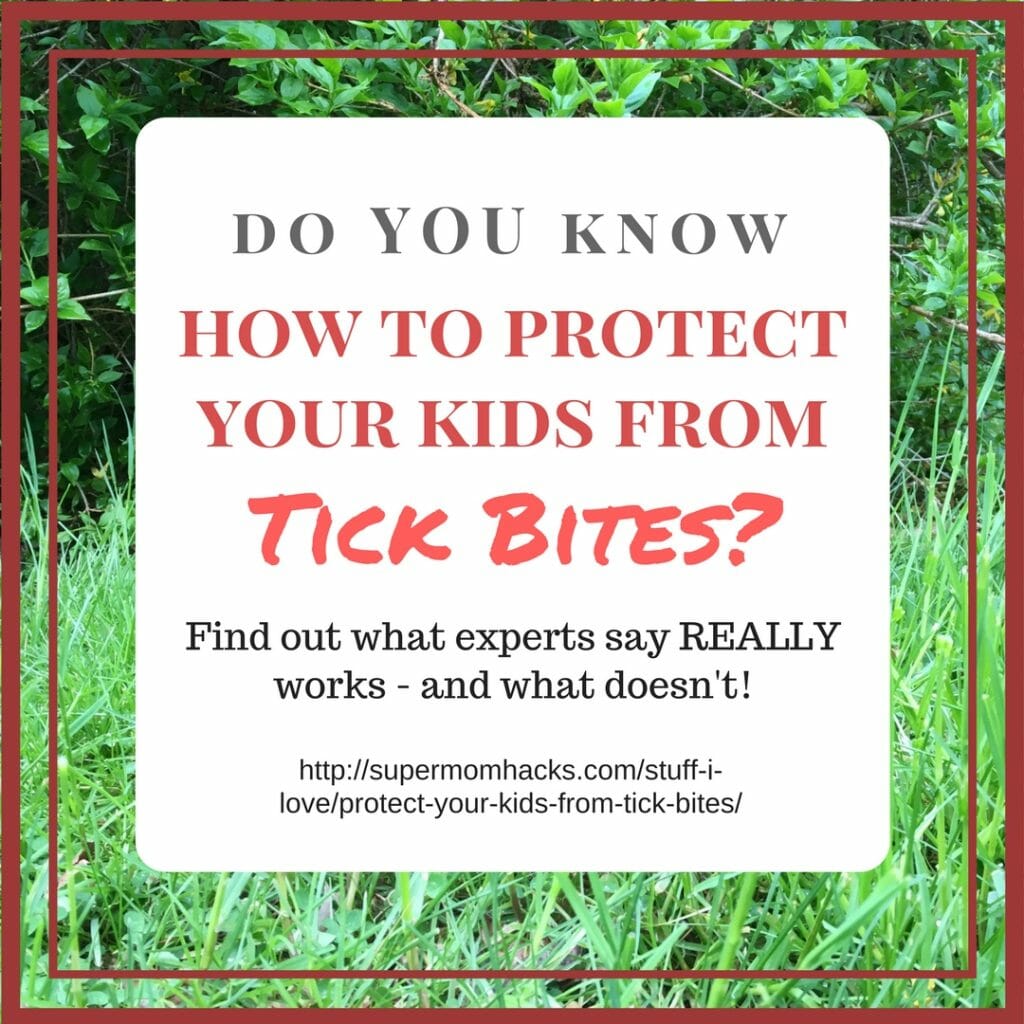 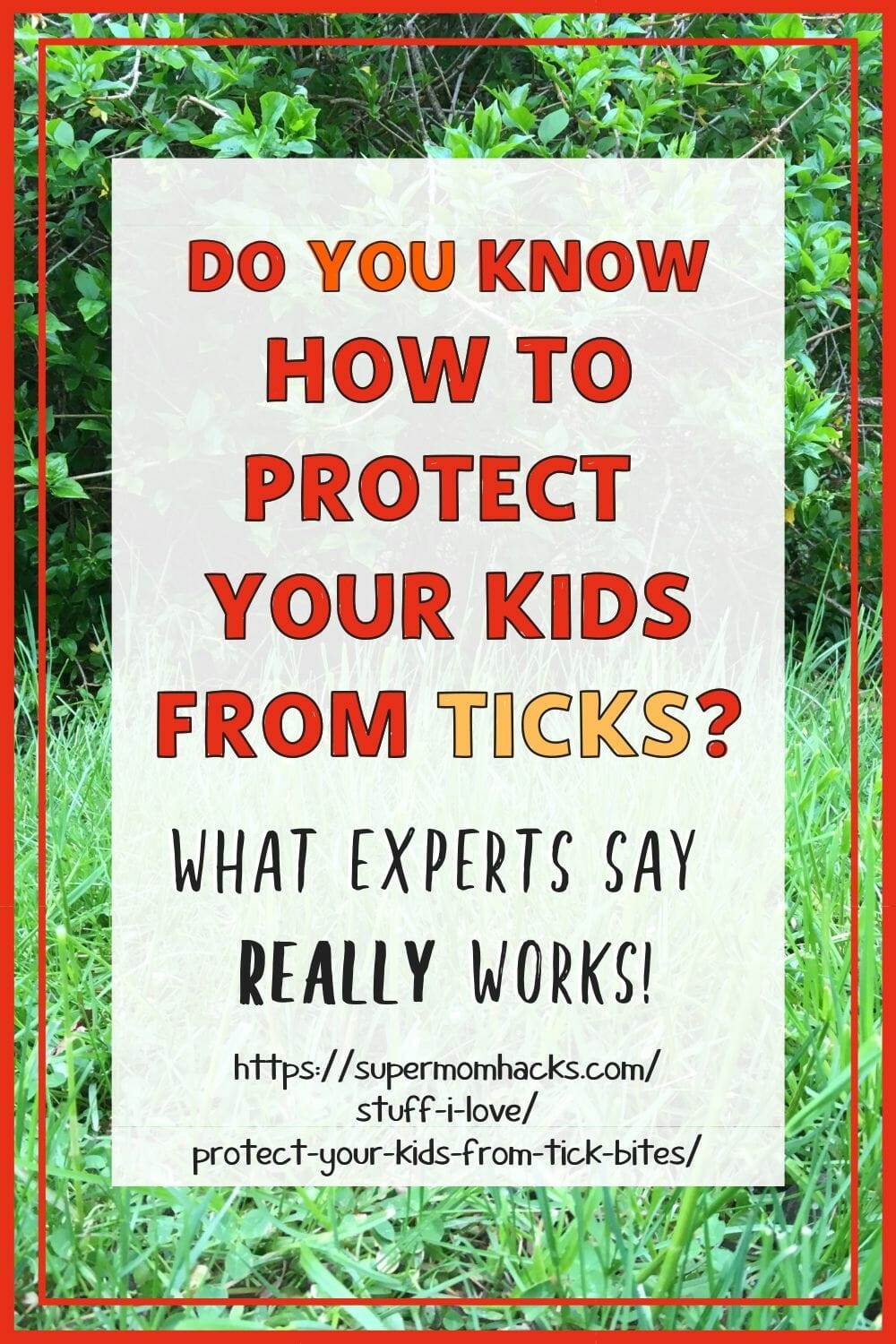 But it’s not just U.S. experts warning each spring about preventing tick bites:

The US wasn’t the only nation worrying about the increase in ticks and their diseases after recent mild winters. Mild winter weather means more mice, which means more animal hosts for disease-carrying ticks, which means higher tick populations.

In other words, knowing how to prevent tick bites is critical regardless of where you live or travel.

So let’s assume you’re a parent who wants to protect your kids from tick bites. What do you do? 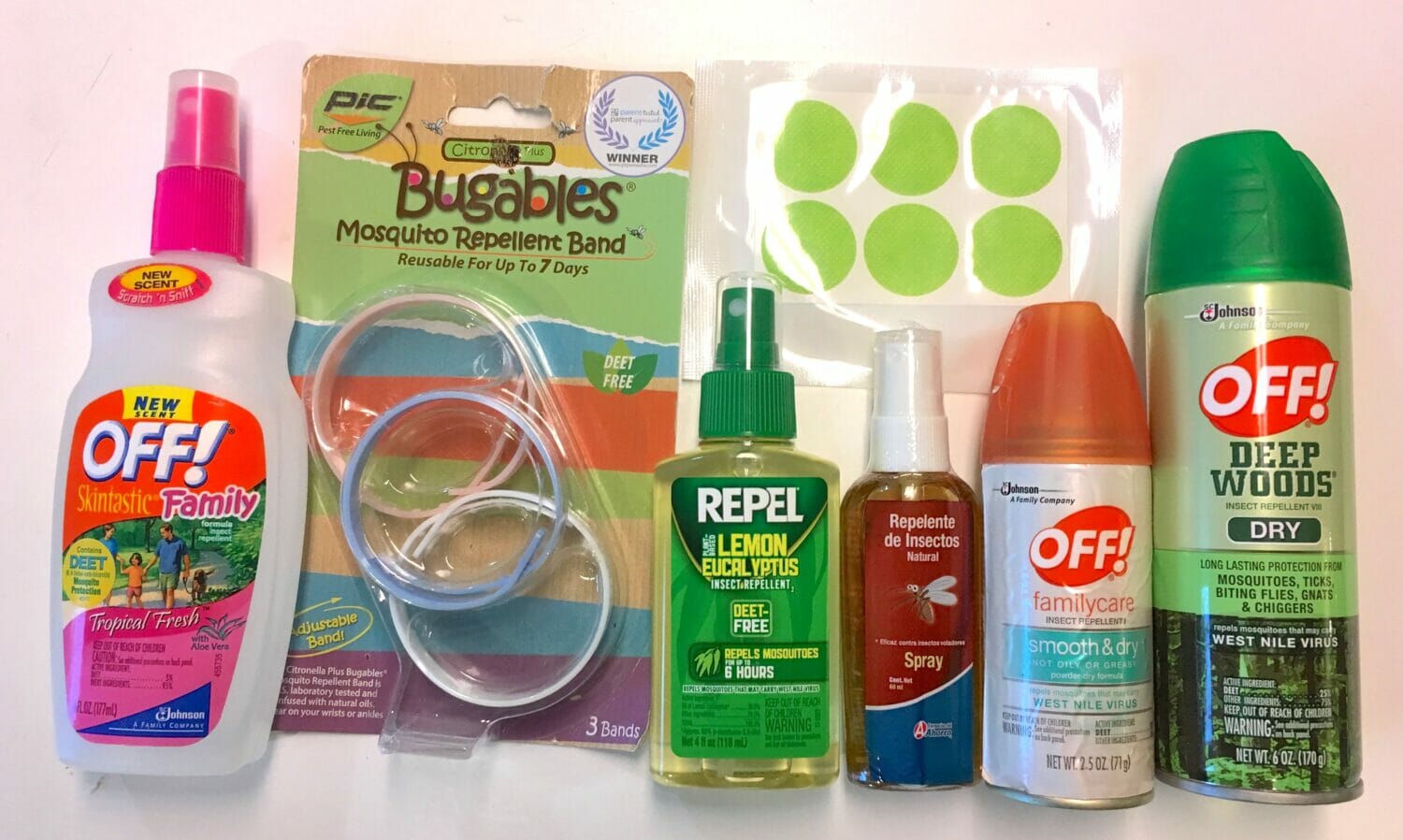 Enter my friend Renée. Several springs ago, she asked what we used for bug repellent. She was looking for an effective, all-natural mosquito repellent, though she also wanted to avoid tick bites. In other words, she wanted something that would prevent tick bites without DEET.

The U.S. Environmental Protection Agency has reviewed DEET several times and maintains it’s generally safe to use, though they acknowledge it causes “skin irritation” in some users.

Yes, some parents have reported nervous-system problems in children exposed to DEET. Official sources maintain that this is due to not following instructions and warnings for proper use.  (Popular Science notes that the number of severe cases is extremely low, and the problems can’t be conclusively linked to DEET use anyway.)

But Renée’s question got me wondering: How well DO insect repellents work against ticks? (Ticks are, after all, more closely related to spiders than mosquitoes.)

News reports of this year’s especially-bad tick season, which usually end with something like “apply bug repellent,” weren’t very helpful. And family-camping season is rapidly approaching.

So I did some research. This is what I learned. 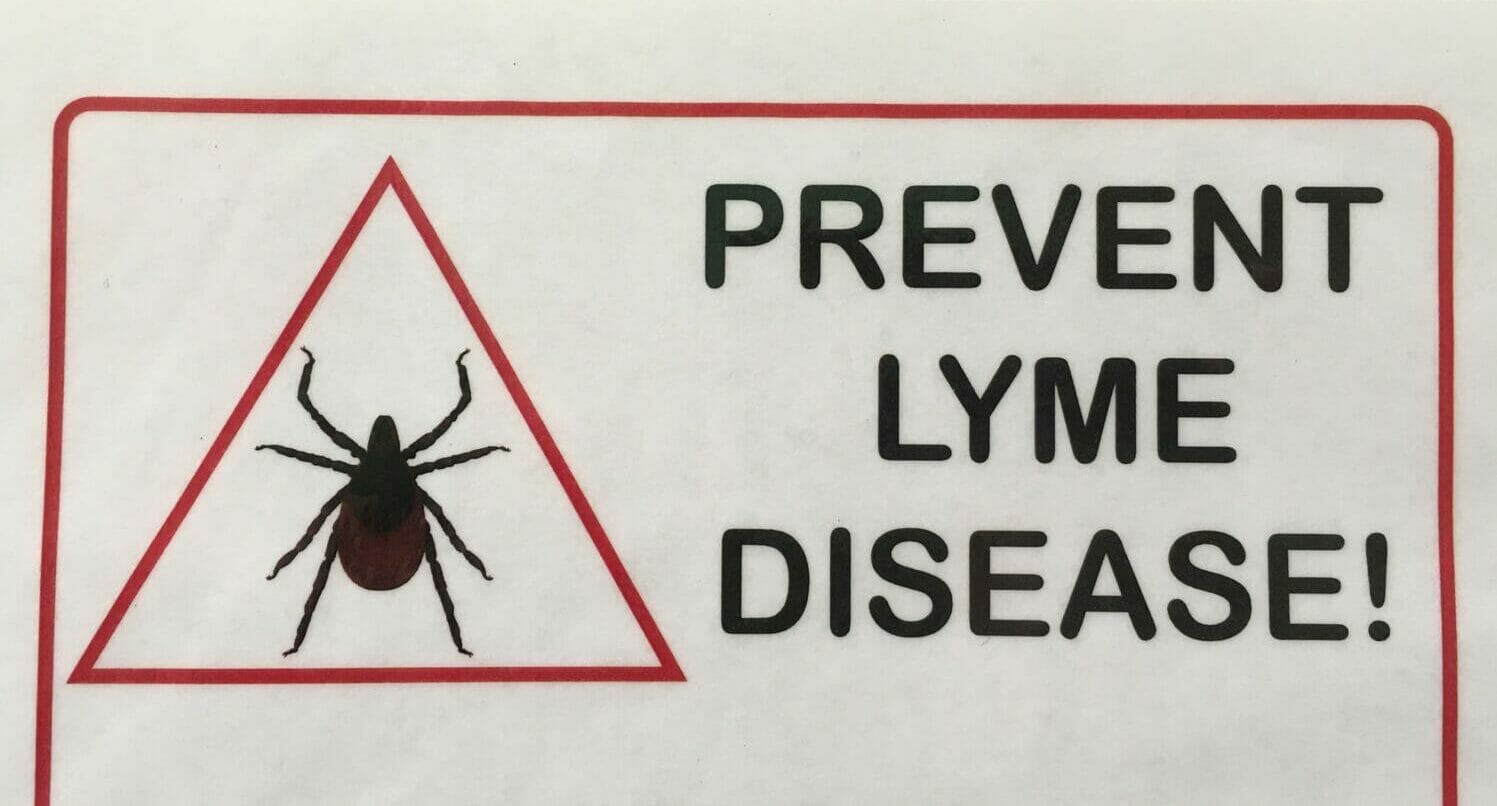 Unless you’re new to tick-borne illnesses, you probably already know the standard advice. But it’s worth repeating anyway:

To protect your kids from tick bites,

So, once you’ve covered those bases,

Which insect repellent will protect your kids from tick bites?

Here’s a rundown of the more common insect-repellent active ingredients, and how well they work against ticks and mosquitoes:

With one exception (see below), these provide little protection from mosquitoes. In tests conducted by the independent organization Consumer Reports, repellents based on natural oils generally repelled mosquitoes for only 30-60 minutes. 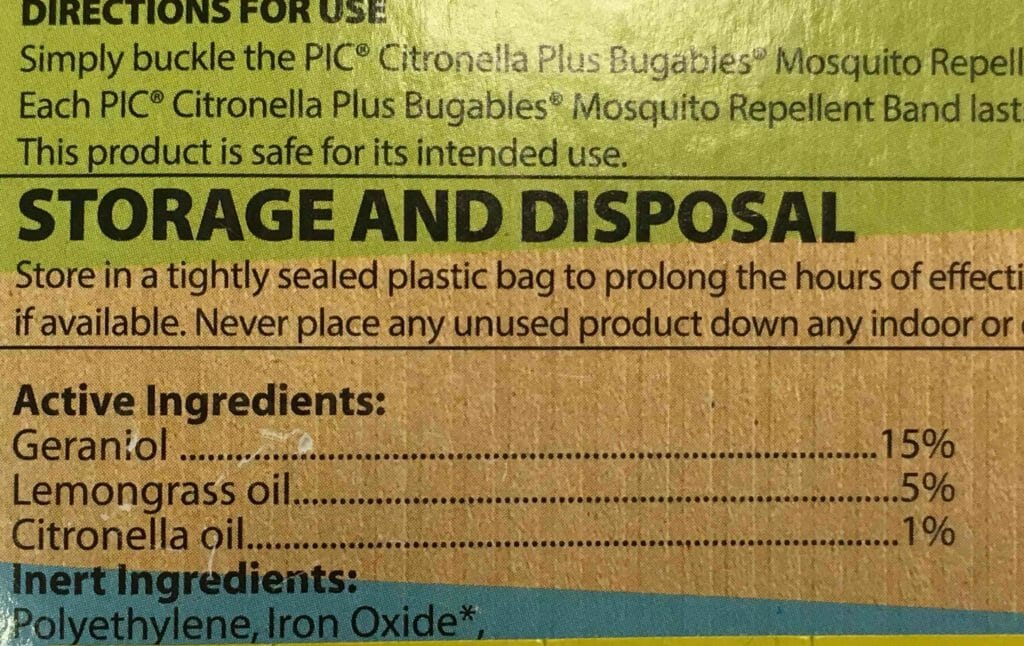 Moreover, as American Academy of Pediatrics physicians have noted, these oils can cause severe allergic reactions in some users, and we don’t really know how well they work against ticks. The Center for Wilderness Safety deems them ineffective tick repellents.

While Consumer Reports testing found that some natural-oil formulas offer limited tick protection, personally, I’d rather use something that will work against ticks AND mosquitoes.

This was the only naturally-based ingredient that Consumer Reports gave decent marks for repelling both ticks AND mosquitoes. This makes it an encouraging all-natural option. 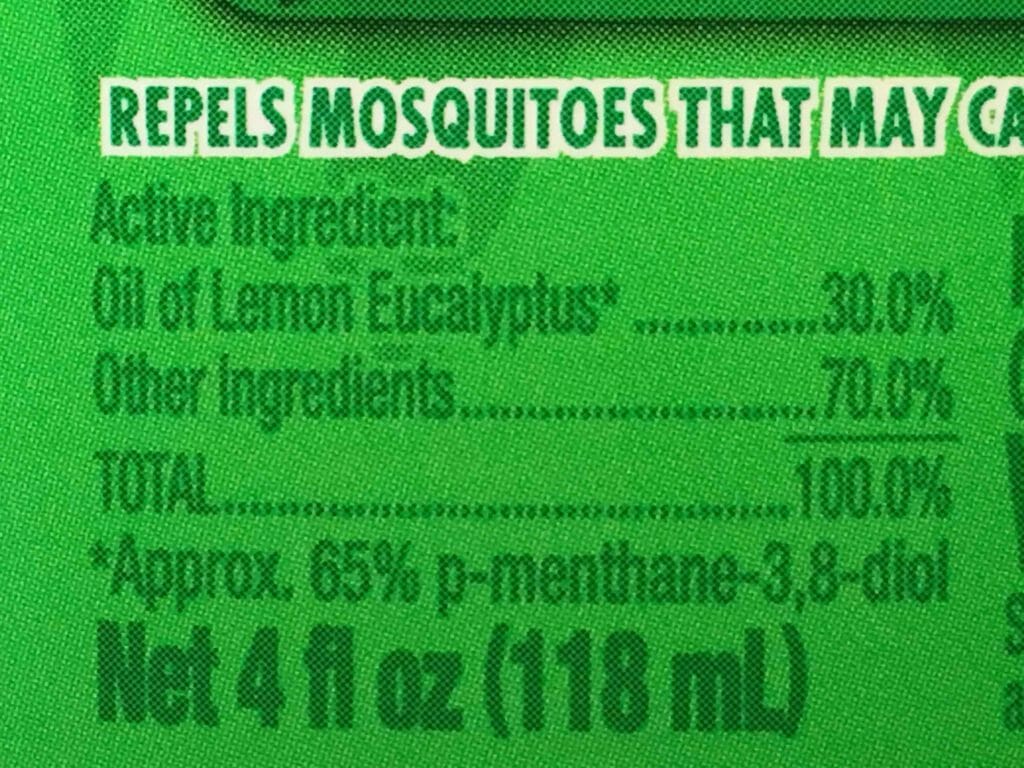 With one major caveat: According to the Centers for Disease Control and Prevention, oil of lemon eucalyptus isn’t safe for kids under three years, because of possible skin irritation or allergic reaction. (That would include my friend Renée’s kids. Sorry, Renée!)

This active ingredient has been widely used in Europe for over three decades now. While it does well on tests against ticks and one type of mosquito, it does poorly against another common mosquito variety.

Again, though, there are caveats. One, you need to make sure the concentration of IR3535 is high enough to be effective; lower concentrations (7.5%) don’t protect well at all. Second, avoid products containing IR3535 (or any bug repellent) plus sunscreen. Because sunscreen needs to be reapplied more often than bug repellents, you’ll either come up short on sun protection, or overdose on repellent.

Picaridin (aka KBR 3023), the top-selling repellent ingredient in Europe and Australia, is still relatively new to the United States. Nonetheless, it’s the only non-DEET repellent that the American Academy of Pediatrics even mentions as a DEET alternative.

Whether it works against ticks depends not so much on who you ask, as on the concentration you’re using. According to Consumer Reports, products containing 20% picaridin repel both mosquitoes and ticks for much longer than those with lower concentrations.

And while opponents of DEET will like that picaridin won’t melt plastics or your clothes – as DEET has been known to do – it hasn’t been around as long as DEET, so it hasn’t been studied as thoroughly.

DEET, first invented by the U.S. Army in 1946, is the most-studied bug repellent around. It’s widely considered safe for human use and effective at repelling mosquitoes. Popular Science calls it “the best insect repellent humans have ever invented.” 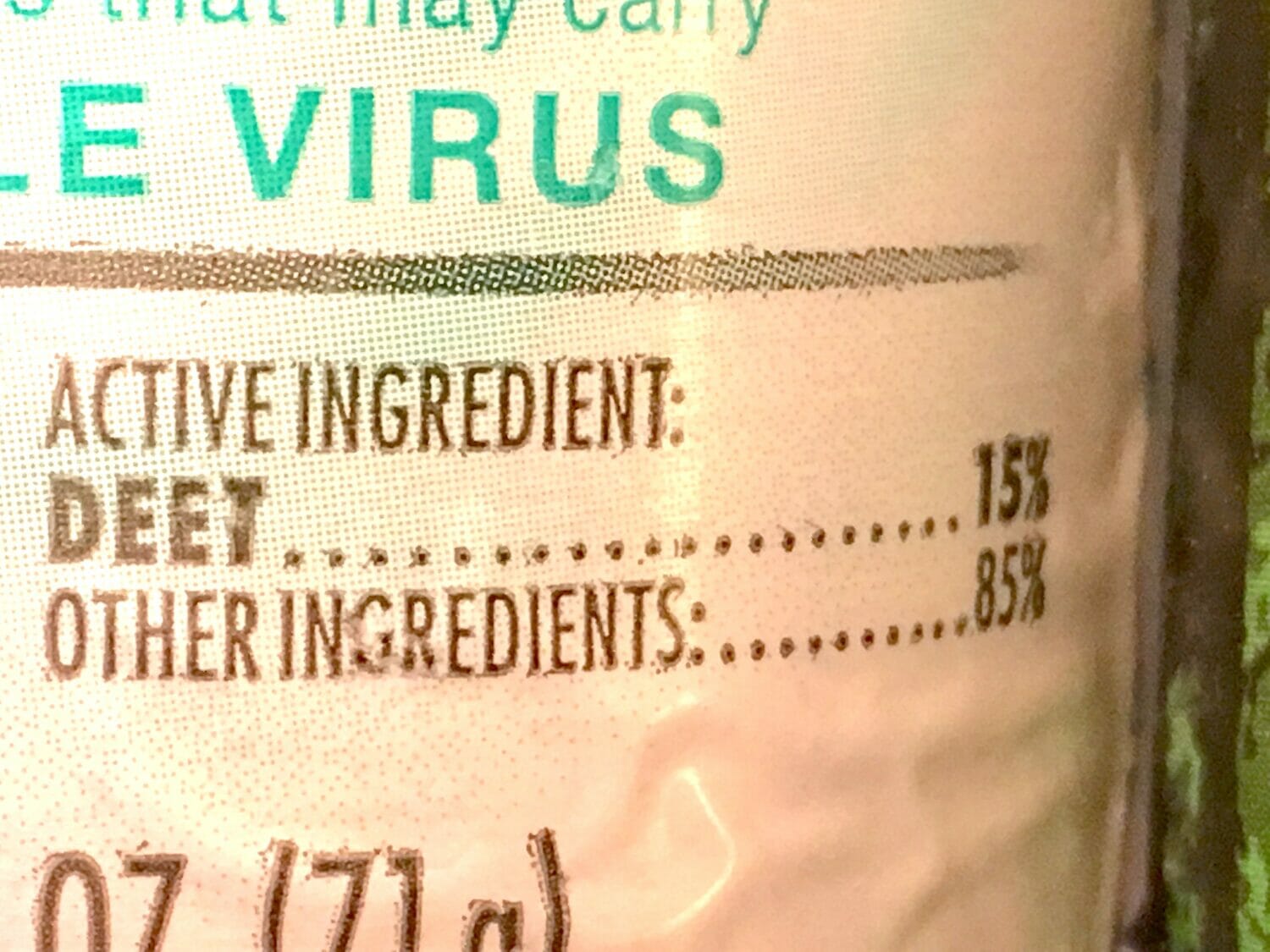 Yes, it melts some plastics. And watch crystals. So you might want to avoid it for those reasons.

But I still wondered: Does it effectively repel ticks?

The answer, again, is “it depends.” Consumer Reports recommends products containing 15-30% DEET for long-lasting tick prevention. But one 25% DEET product they tested did poorly at long-term tick control, and concentrations less than 10% also didn’t protect as long. 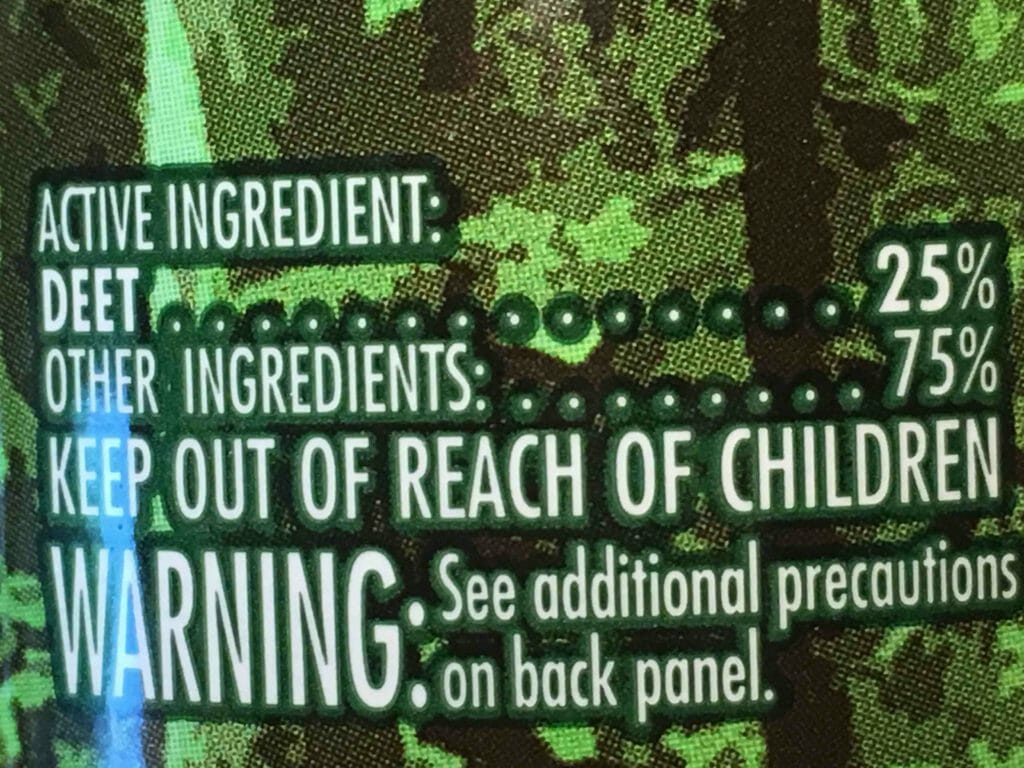 And this is where it gets tricky, if you’re a parent who wants to protect your kids from tick bites: 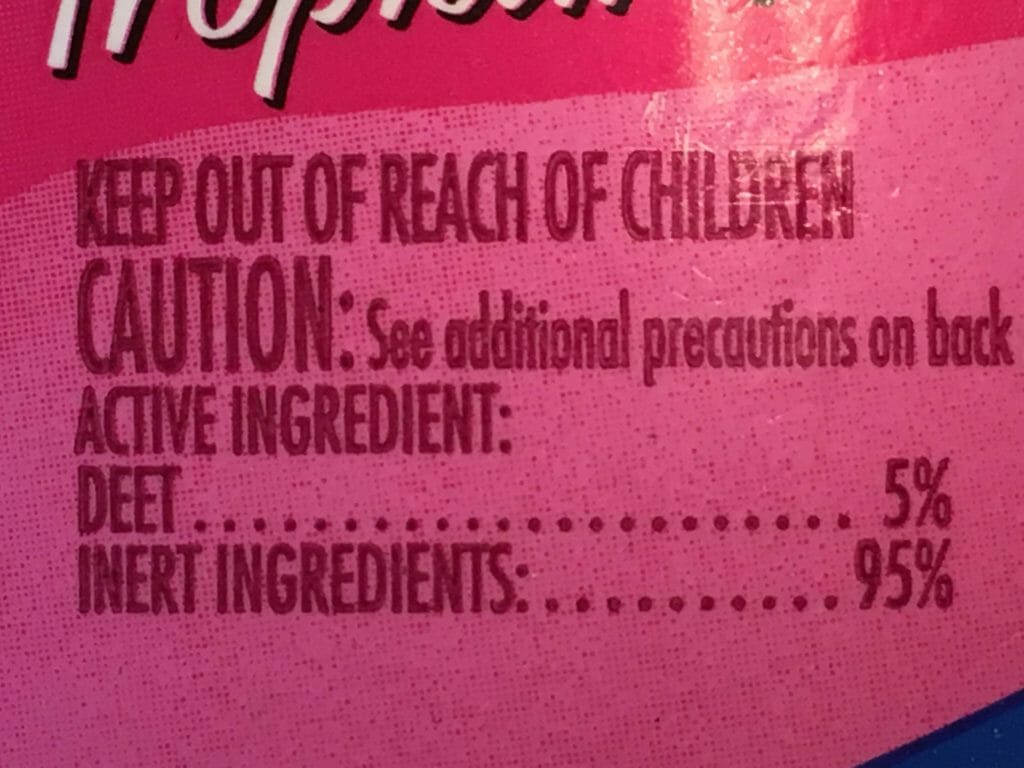 So yes, the Appalachian Mountain Club tells its members that DEET trumps picaridin against ticks.

Dress them in permethrin-treated clothing

But if you have to choose between DEET on your skin and permethrin-treated clothing, choose permethrin. According to Tom Grier, a Lyme Disease researcher at University of Minnesota-Duluth Medical School, “permethrin wins hands-down.”

As American Academy of Pediatrics doctors and many others have noted, permethrin is “the most effective repellent for ticks.” Whereas skin repellents act to repel ticks, contact with permethrin actually KILLS the ticks in 5-30 seconds.

Permethrin is a synthetic version of a naturally-occuring insecticide found in chrysanthemums. 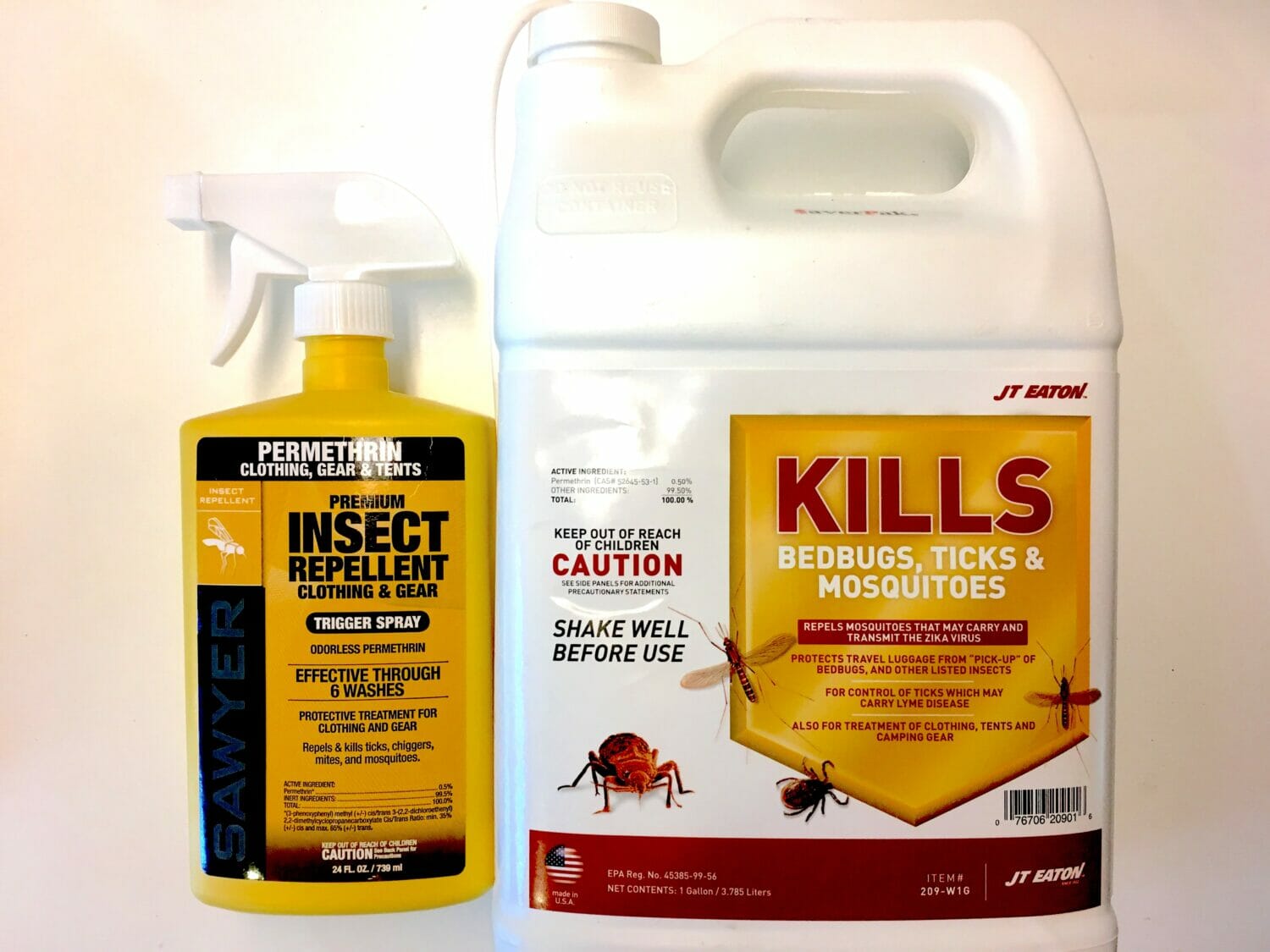 Not only does it kill ticks, it also kills mosquitoes. So effectively, in fact, that permethrin-treated clothes are what the CDC recommends for protection against the Zika virus.

Even better, it’s non-toxic to humans once dried. And honestly, the CDC’s cautionary notes on permethrin sound pretty common-sense to me, anyway: don’t get the liquid form into your eyes, on your skin, or into your lungs, because it could cause irritation. (Worth repeating: Permethrin is for your clothing, NOT YOUR SKIN.)

Also worth noting: while drying, it’s toxic for cats. And though it’s great for killing mosquitoes and ticks, it’s also highly toxic to honeybees, fish, and aquatic life more generally. So skip treating those swimsuits before your next beach trip.

How do I get permethrin-treated clothing?

There are three ways you can get permethrin-treated clothes for your summer adventures: 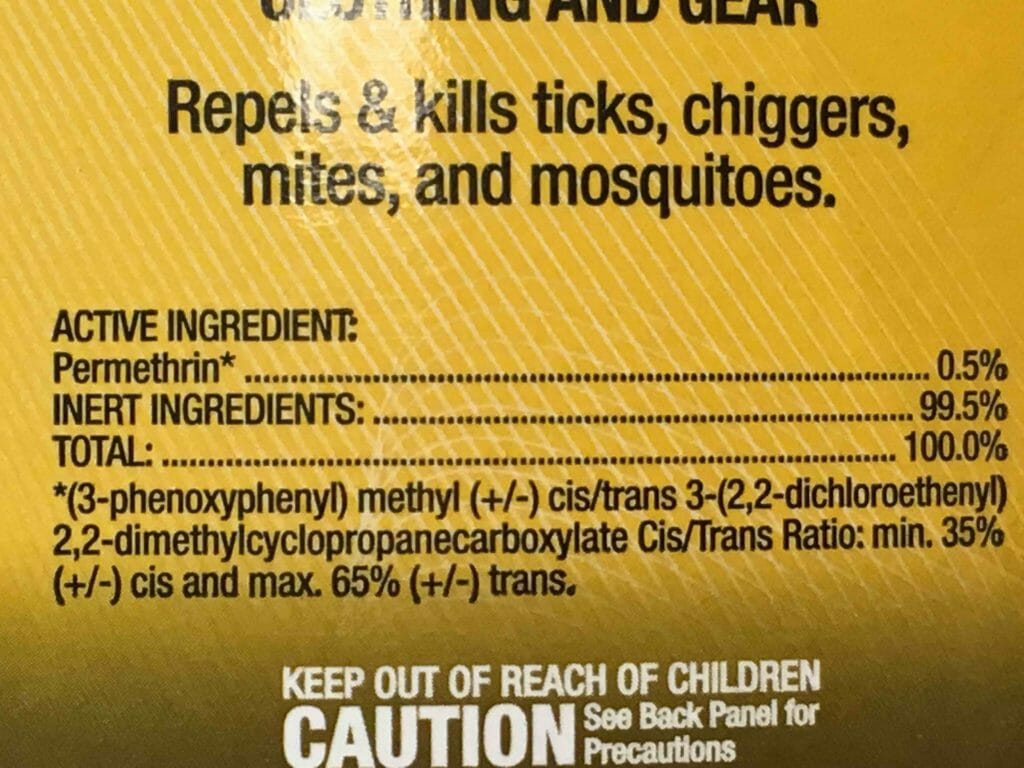 Now that you know how to prevent tick bites with permethrin, see my next post for more on applying your own permethrin to clothing. I first did this for my kids in 2017, and we’ve done it every May and July since. It makes SUCH a huge difference in cutting down on mosquito bites, while preventing tick bites altogether!

Here’s to a summer with no tick bites! (Or mosquito bites, for that matter!)

If you enjoyed this post on preventing tick bites, please share with others by pinning this image! 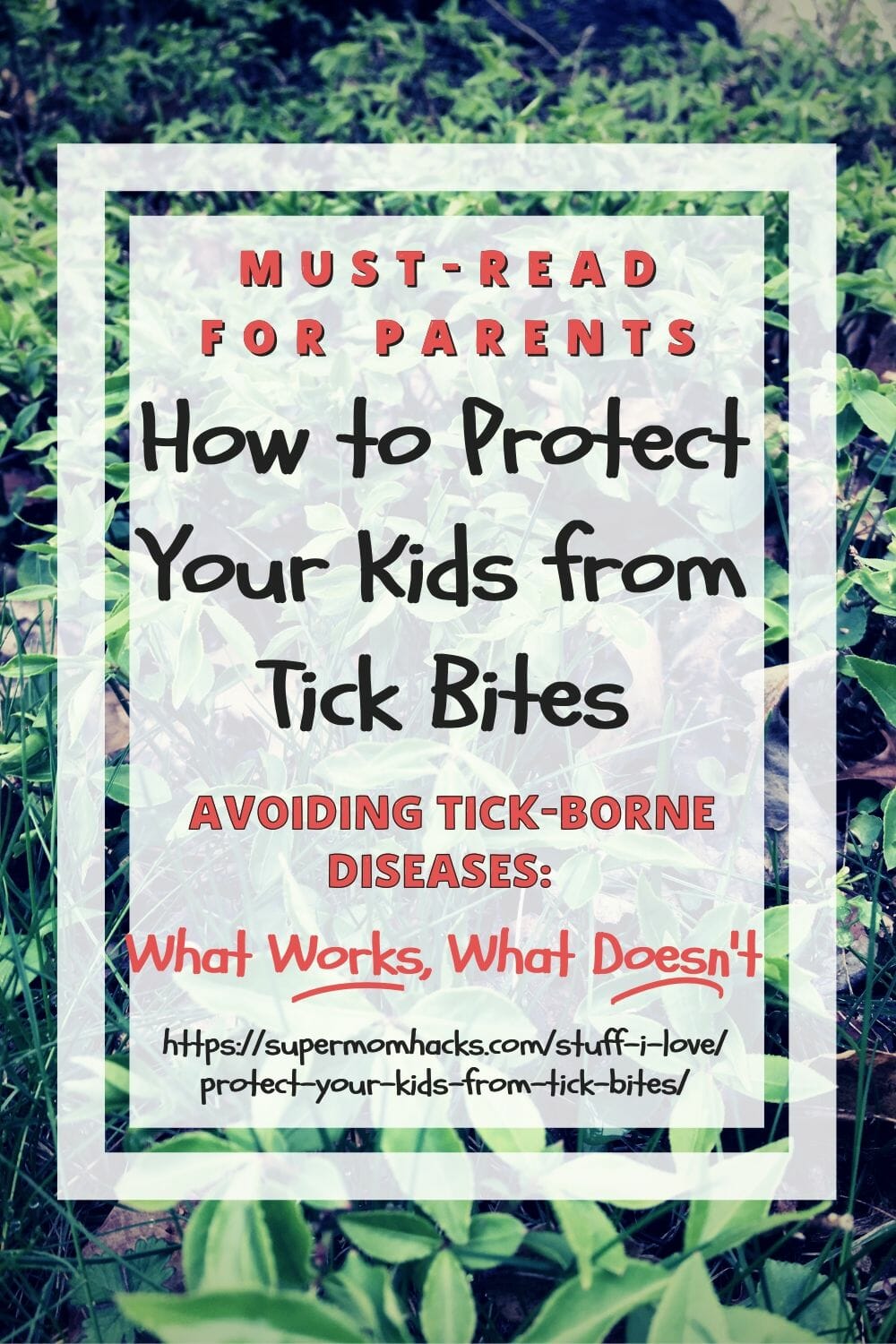 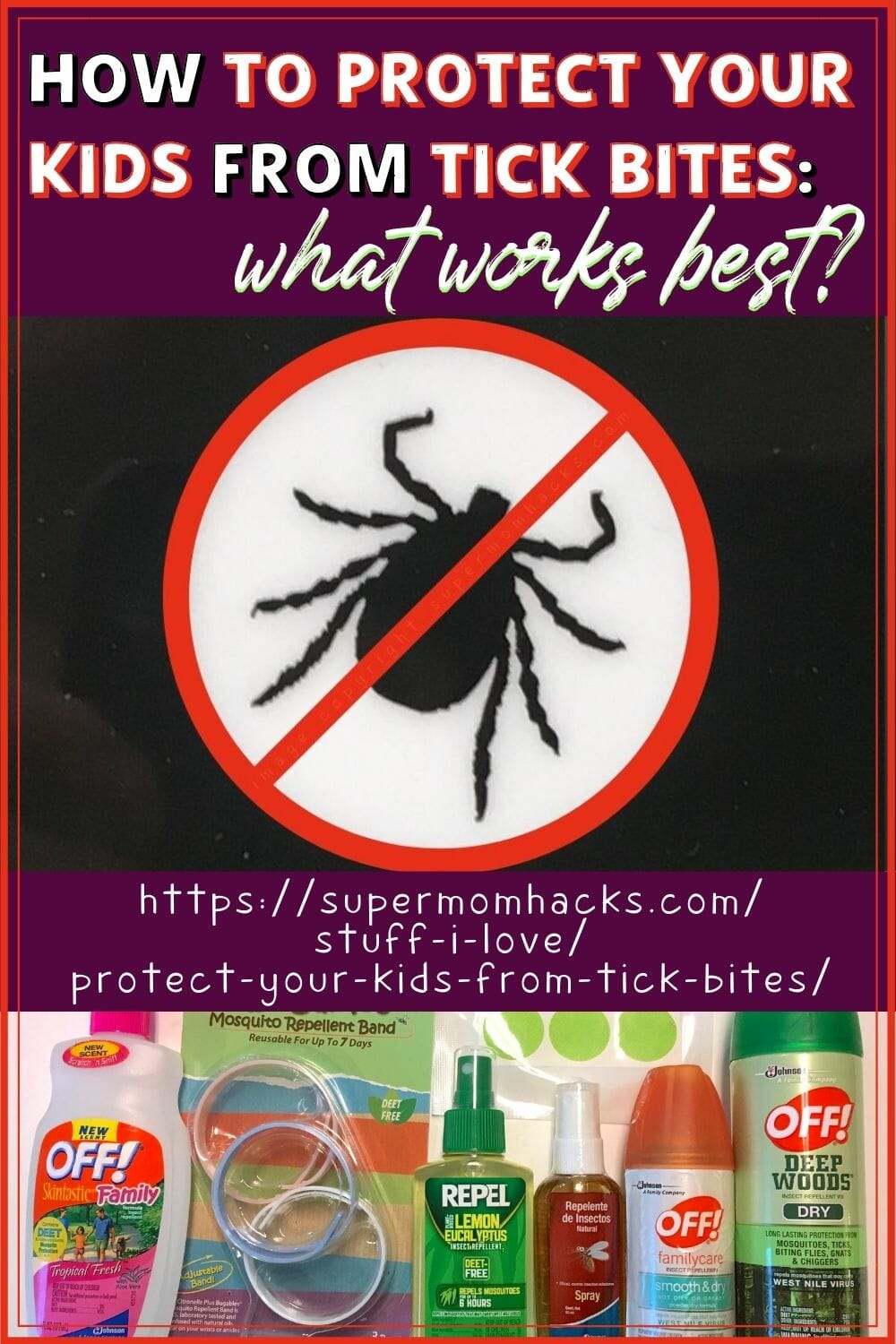