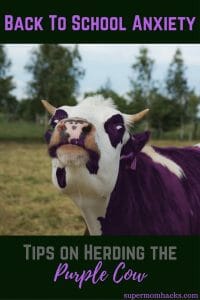 Have you noticed any of these back-to-school anxiety symptoms in your child(ren) since they resumed classes this fall?

If your child scored 8 out of a possible 8 points, congratulations! Your kiddo ranks right up there with Kimmie’s current score.

That’s what I’ve been asking myself for the past month or so. Kimmie has NEVER been a clingy child. She was never the type to haul around a security blanket or other prized toy with her everywhere she went. Her first day of preschool, she marched into the building at drop-off without so much as a backward glance.

Yet my formerly self-assured firstborn seems less confident of herself than ever before, now that she’s in first grade. Even though she’s in the same school as last year, and already knew many of her classmates. Granted, our district still has half-day kindergarten, so she’s now spending twice as long at school as she did last year. But even in preschool, she had full days several times a week thanks to the optional add-on programs she attended.

Best I’ve been able to come up with so far is this: For whatever reason, Kimmie has begun this school year feeling like a fish out of water. Or, if you prefer something less cliché, a purple cow.

In case you’re not familiar with it, “The Purple Cow” is a short poem by Gelett Burgess, and first appeared in 1895:

I never saw a Purple Cow,
I never hope to see one;
But I can tell you, anyhow,
I’d rather see than be one.

Imagine for a moment that you’re the Purple Cow in this poem. You don’t fit in anywhere; instead, you stand out with nowhere to hide. And not only are you not part of the herd, but no one WANTS you to be part of their herd.

This is how Kimmie’s been feeling since the start of school, far as I can tell. The sneeze-by-sneeze commentary I get about every school-day soap opera is the most noteworthy aspect of this.

The Purple Cow At Home

She actually almost missed the school bus this morning, thanks to her half-hour recounting of every vivid detail of the “strange dreams” she had last night. Not bad enough to send her running to our room in the wee hours – but powerful enough that she had to get them off her chest.

Every dream fragment she recounted revolved around the school day, starting with a lesson on light that involved the classroom being lit by candles. Which was fine for Kimmie, until Puck – the boy who sits next to her – accidentally knocked his candle over. This led to hot wax spilling all over the name sign on Kimmie’s desk, which in turn erased her name. An apt metaphor for how she seems to have been feeling over the past month.

And mixed in with the snatches of dreams were real-life dramas from recent school days, snippets that hadn’t yet appeared in each afternoon’s soap opera installment. Like the recent lunch period when Kimmie sat across from a girl named Kasha. The cafeteria was serving spaghetti and meatballs that day. And as Kimmie recounted it, “I was saying something over and over that was annoying Kasha, and Kasha said that if I didn’t stop, she was going to throw a meatball at me!”

“So did she throw a meatball at you?” I continued.

“No, something even worse!” Kimmie said dramatically. “She threw a MEATBALL SHE HAD ALREADY TAKEN A BITE OUT OF at me!”

Why is the cow purple, anyway?

I haven’t studied psychology since high school, but it’s pretty obvious to me that something bigger is going on here. At least in Kimmie’s mind.

For what it’s worth, being a Purple Cow is NOT the same as being a “Special Snowflake.” My husband has seen far too many Special Snowflakes in his teaching career. The last thing we want, or try, to do is raise our kids with a sense of privileged entitlement to anything.

Just like everything else in life, making friends and figuring out where you fit in the pecking order takes hard work. It doesn’t happen magically, it doesn’t happen overnight, and there are no shortcuts.

Of course, there are other reasons why a kid could be having a difficult start to the school year:

But in Kimmie’s case, she’s just having a hard time sorting out her place in the herd as a first-grader. Not only does she have to figure out her new classroom dynamics, but she has more contact with kids from older classes than ever before, and she’s clear on where first-graders rank in the overall hierarchy. 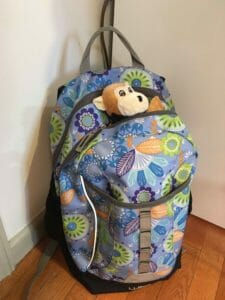 So I’ve been spending a lot of time listening patiently to what’s going on at school. And trying to help her make sense of it all.

No, Kasha should not have thrown a meatball at Kimmie, half-eaten or otherwise. But Kimmie should have known better than to provoke Kasha in the first place. At the very least, she could have stopped upsetting Kasha as soon as Kasha said something, rather than continuing to poke the tiger.

Fortunately, most of what the experts have to say about helping your kiddo manage back-to-school anxiety (e.g., here, here, here, here, and here) meshes with what we’ve been doing anyway: 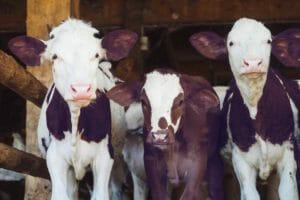 Chances are good that things won’t turn out the way your child hopes or expects. Nothing in life is that simple. Yes, Mike Wazowski eventually worked on the Scare Floor, as fans of Monsters, Inc. know well. But first he got kicked out of the School of Scaring at Monsters University. Moreover, he only found his herd after he reluctantly joined Oozma Kappa, the fraternity for misfits. The point is, he did find a herd in the end, and he realized that being O.K. was just fine.

As for Kimmie, I know there’s a whole world of Purple Cows out there. All she has to do is keep being the kind of friend she’d like to have. Sooner or later, I’m confident she’ll find her herd. 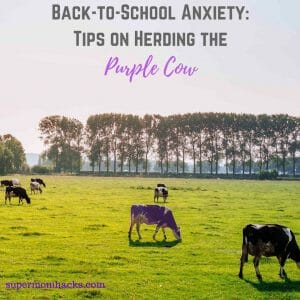