Have big-kid nightmares got your household missing more sleep than you’ve missed since you had a newborn around? That’s how our house has been feeling lately, since Kimmie went back to school.

For example, take last night. It’s around 9pm. My husband and I had just wrapped up our nightly planning meeting and settled into our pre-bed “TV” (online streaming) session. We were barely through the opening credits when we heard a wail that didn’t match the soundtrack of our show .

At first we agreed the cry sounded like our four-year-old. But when I got upstairs to investigate, I discovered that six-year-old Kimmie was actually the one howling. 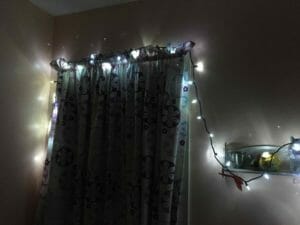 Enter room. Turn on the string of white lights hanging over her windows and bed (which creates the perfect level of low lighting for bedtime routines, morning wake-up calls, and middle-of-the-night mishaps). Ascertain that Kimmie is indeed awake, versus still sound asleep in the throes of a night terror.

“Can you tell me about it? Do you want to talk about it, or no?” Wail – her most energetic yet.

“How about I get you a sip of water, and then you sit up to drink it, and then we snuggle and I sing you your lullabies?” Sniffle, accompanied by a nod.

I sang the full gamut of lullabies from when she was a baby, which has long since been shortened to one or maybe two before bed. She calmed down until I began the second-to-last lullaby, at which point the wailing resumed with such vigor that my husband came up to investigate. 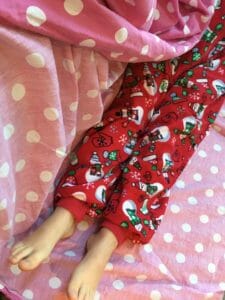 “Kimmie, what’s wrong? Can you tell us what’s the matter?”

The back of my mind began calculating how many hours remained until my alarm went off at 5am, so I could get in a few hours of writing before the kids got up for school. It was clear that Kimmie’s big-kid nightmare required a drastic middle-of-the-night reset, but what?

Looking at her leg revealed no obvious bumps or bruises, and my already-winding-down-for-the-night brain strained, as it has many times since Kimmie began first grade, to recall things read long ago about little kids and growing pains and sleep disruption.

Then I had an idea. One I wished I’d thought of weeks ago.

Why not try a whole-body massage?

I used to massage the girls when they were babies, as part of their bedtime routine. From around 2 months old to around 5 or 6 months (as soon as they became too wiggly), the girls got massage one evening and bath the next. Massage was the only thing that calmed Kimmie’s colicky tendencies enough that she could go to sleep. Essie loved her massages so much that if bedtime were delayed for any reason, she’d start to thrust up her chest and belly (her favorite body parts for massaging), as if to say, “Rub me already – let’s get on with this!”

When squirmy-wormy Big Sister came across me massaging Baby one evening, she was so intrigued that she begged me to give her a massage the next afternoon. She liked it so much that she went through a phase when most afternoons, after her sister went down for a nap, she’d lie down on the living-room floor and insist on a massage. 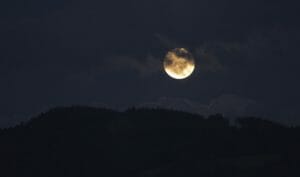 But that was many summers ago now. When I asked Kimmie last night if she remembered me giving her or her sister massages when they were younger, she had no recollection. So I explained to her that a massage would both help her sore leg feel better, and help her get back to sleep after her big-kid nightmare.

I followed the same general pattern and motions I had with baby massages:

Unlike when the girls were babies, there was no need to strip Kimmie down to her diaper (thank goodness!); I just had Kimmie keep her PJs on. And given that she’s no longer an infant, I contained the chest portion of her massage to below her ribcage.

If you’re a massage aficionado, then yes, you can use lotion or oil. I never have, but it’s a perfectly acceptable option.

If you’ve never done massages on your (big) kids before and don’t know where to start, there are great how-to guides here and here, and here’s a nice how-to (with a video) on baby massage.

Besides following the same pattern I had when they were infants, I also sang them the same song I had with baby massages.

If you already sing to your kids (or have in the past), this is a great way to cue them into the fact that this is a time to relax and enjoy their one-on-one bonding with you. Even better, I’ve found it’s a good way for me to keep track of how long I’ve been on each body part, and know when to move onto the next one.

You can use any song you like. If it’s one that goes over different body parts, all the better. Focus on each part of the body as you reach that body part in the song, if that works. Or make up a new song – I can imagine variations on “Old Macdonald Had a Farm” and “The Farmer In The Dell” that focused on different body parts instead of different animals.

I especially like the way it helps me set a certain amount of time for each body part or motion, so I can be somewhat consistent and remember to do each part in the same order.

Far as I know, I’m the first person to use “Alouette” this way, and I’ve had to look up a few body parts along the way, parts whose names I struggled to remember last night. (While the original song goes over basic body parts on a bird, it doesn’t include things like toes, fingers, and shoulders!)

And I’m happy to report that Kimmie was calmed down enough to say goodnight again, and fall right back asleep, in less than 15 minutes.

Have you tried massages to power your household through big-kid nightmares? What’s your trick to helping them get over it so they can go back to sleep? Let us know in the comments!