Overheard at bedtime the other night, a half-hour after lights-off, as I’m trying to get Kimmie tucked in:

Kimmie: “I’ve got to have a talk with Huckle’s teacher.” 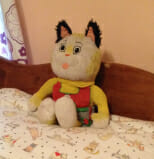 Huckle, a stuffed-animal incarnation of the Richard Scarry character, is Kimmie’s bedtime buddy.

Oh, crud I think to myself – did she overhear me saying something along those lines to Daddy? What did I say, and when?

Mama: “Wait a minute – I thought Huckle stayed in bed and slept all day while you were gone. You mean to tell me that Huckle goes to school?”

One part of my brain realizes that this is just opening a can of worms, and further prolonging bedtime.

But the other part really wants to know what prompted this random comment on her part. That is, what besides an innate desire to postpone lights-out.

K: “Yes, it’s just like magic – as soon as I leave in the morning, my room magically transforms into a school just like the one I go to, only smaller. There are fewer teachers. But there’s a P.E. teacher, and an art teacher, and a music teacher, and a librarian, and a couple of cafeteria workers, who feed the kids –“

M: “-You mean the other stuffed animals?”

K: “-Yeah, they’re the kids. And a cafeteria monitor who stays outside the lunch line and helps the kids, I mean the stuffed animals, who need help with opening their milk and stuff like that. And then of course there’s Huckle’s teacher.” 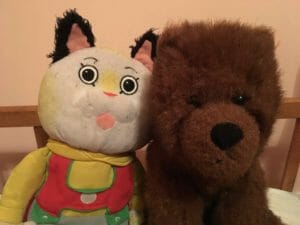 Bear was her original must-sleep-with bedtime buddy. That was several years ago.

M: “Wait a minute – I thought Huckle and Bear were married?”

Which is what she told me once upon a time. I distinctly remember asking her about this, and she explained that of COURSE they were married, because Huckle was the mama and Bear was the daddy and all the rest of her stuffed animals (being smaller than Huckle and Bear) were their kids. 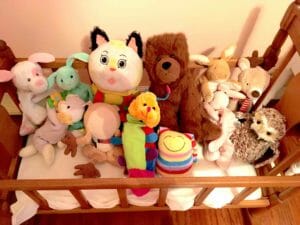 At that time, I remember following up by asking her how Huckle, being a boy, could be the mama of all the others. That was when she explained to me that Huckle was now (as of that point in time) actually a girl.

Kimmie had a lot of “gender-fluid” friends for awhile there – stuffed animals that were magically girls one day, and boys the next. It appears that most of them have long since decided they are, in fact, girls once and for all.

Fascinating to observe all of this through your kiddo’s eyes.

M: “But how can Bear be Huckle’s teacher if they’re friends?”

Miss Borda is the “special” teacher who works with Kimmie on things like her writing. Kimmie had her last year as well, and is quite fond of her.

M: “OK, so why do you have to have a talk with Bear about Huckle?”

K: “Because Huckle is going to come to school with me one day.”

M: “But I thought stuffed animals weren’t allowed to come to school.” 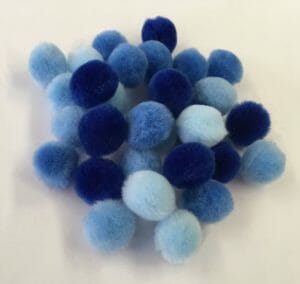 I think she means pom-poms.

M: “What on earth does that mean?”

K: “Well, every time he sees us doing something he likes, Mr. Hellag gives us a pom-pom. That’s a Fuzzie. And when we get ten Fuzzies, we get a little coupon that we can redeem for a special treat.”

Go Mr. Hellag. It sounds as if Fuzzies are not only an incentive system for good behavior, but also a form of first-grade currency. Way to go for sneaking some financial literacy into the first-grade curriculum.

Last night, for example, Kimmie explained to me that yesterday in school, she was 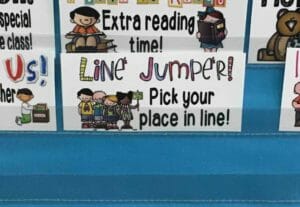 Line Jumper of the Day.

It took awhile for me to understand what a Line Jumper was. Line Jumpers have nothing to do with the first thing I thought of, Smoke Jumpers (thank goodness).

Pay ten Fuzzies to Mr. Hellag, and you, too, can “buy” this privilege for the day.

K: “You can actually get two Fuzzies in one day, sometimes! – I think I got two yesterday – that’s when I got the coupon – so actually, I’ve got eleven altogether so far.”

Not only can you earn more than one Fuzzie in a day sometimes; you can also lose Fuzzies for misbehavior, I learned a few days later.

Hmm, this really is a clever financial education tool that Mr. Hellag has worked out for them.

M: “So let me get this right: the coupon allows you to bring in Huckle for a day whenever you want?”

M: “So why don’t you just bring in Huckle tomorrow?”

K: “Because I want to wait until next Friday, so I can introduce Huckle to Miss Borda. And maybe I can take her to P.E. and introduce her to Mrs. Spinelli, too!”

M: “So that’s why you have to have a talk with Bear about Huckle?”

M: “To let Bear know that Huckle will be missing a day of Huckle’s school so Huckle can come to your school with you instead?”

K: “As long as there’s a good reason and Bear knows ahead of time.”

Aah, I think, so that’s where she was going with this.

But then I start wondering if Kimmie is planning an excused absence for herself?

Not going to open THAT can of worms tonight, I think.

M: “OK, well, you can tell me more about this tomorrow, but right now it’s time for me to sing you your lullaby and say goodnight.”

K: “OK, but sing quietly, please. All the stuffed animals except for Huckle are already asleep.”