How do you build a leprechaun trap? Ask your kids!

With just a few supplies and minimal guidance, even 3- and 4-year-olds can figure out how to build a leprechaun trap. This is truly one of the best STEM challenges for preschoolers I’ve ever seen – not to mention a great way to get kids’ creative juices flowing with a fun problem-solving activity!

But you don’t need to search far and wide for leprechaun trap ideas for kids.

That’s one of the best parts of this activity: it’s kid-driven from start to finish! Give them a few materials (or, if they’re a little older, let them scavenge some from around the house), and they’ll come up with their own ideas for leprechaun traps in no time! 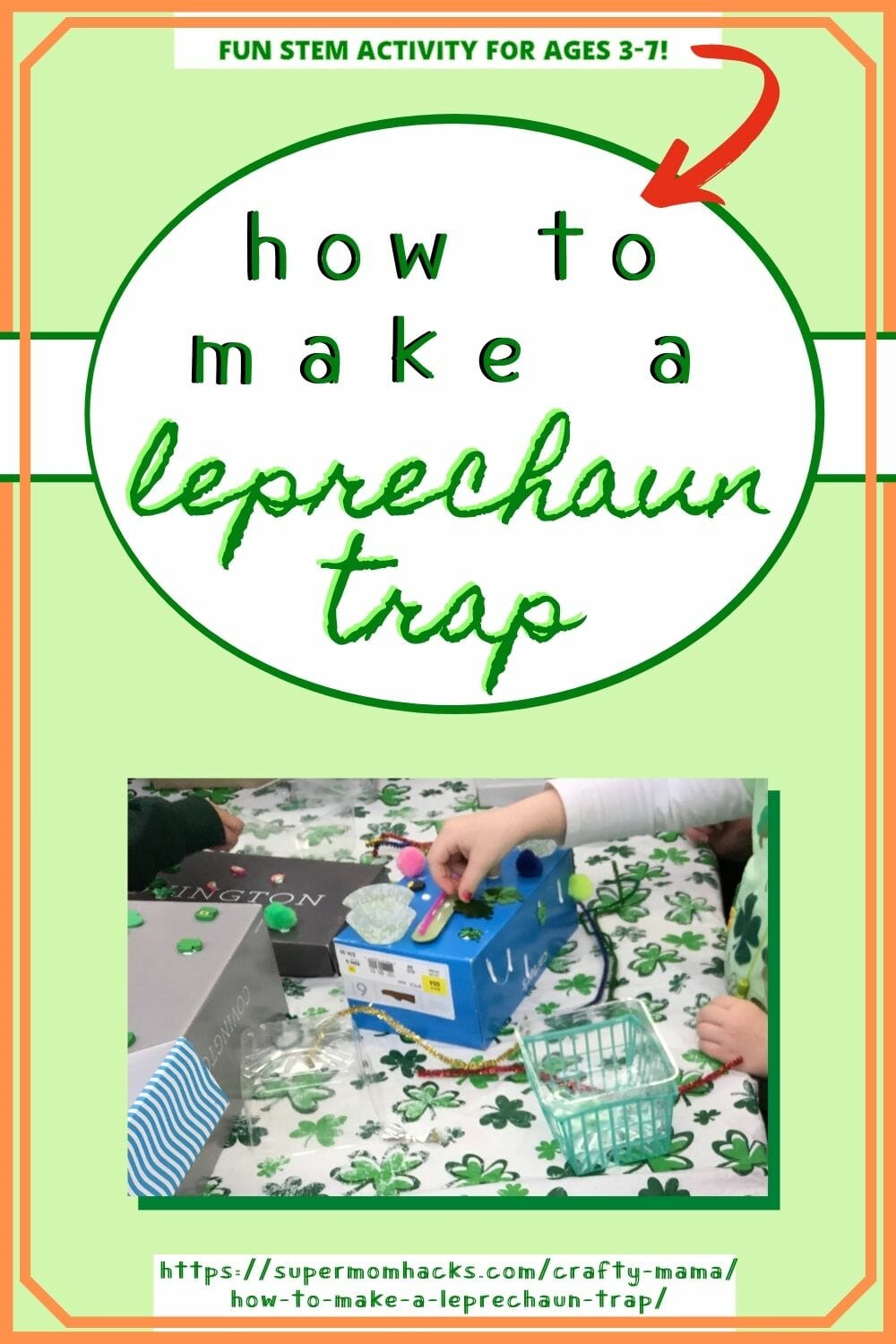 How to Make a Leprechaun Trap: Easy STEM Activity for Preschoolers*

Why building a leprechaun trap is one of THE BEST preschool engineering activities:

This is the basic idea behind this activity:

That final step is CRITICAL from a learning perspective.

It’s one thing to mess around with ideas. But having to explain how something works to someone ELSE kicks up the challenge level by several notches.

And let’s face it, if you’ve scrolled through instructions online from other grownups on how to make leprechaun traps, the results (at least those I’ve seen) are long on grownup prettiness, and short on actual kid ingenuity.

As Essie put it when I asked her what was most important about building a leprechaun trap, in preparation for writing this post:

“Be creative. You don’t have to make it look amazing; just have fun!”

Be creative. You don't have to make it look amazing; just have fun!Click To Tweet

My kids first did this engineering activity in their final year of preschool. They loved it so much, they insisted on building their own leprechaun traps at home for several years afterward. Each year they would come up with a new, different, yet equally creative way to “trap” a leprechaun. I have loved watching their problem-solving skills evolve, along with their ideas about design and functionality.

So if you’re ready to turn your kids loose on this super-fun learning activity, here is

How To Build A Leprechaun Trap 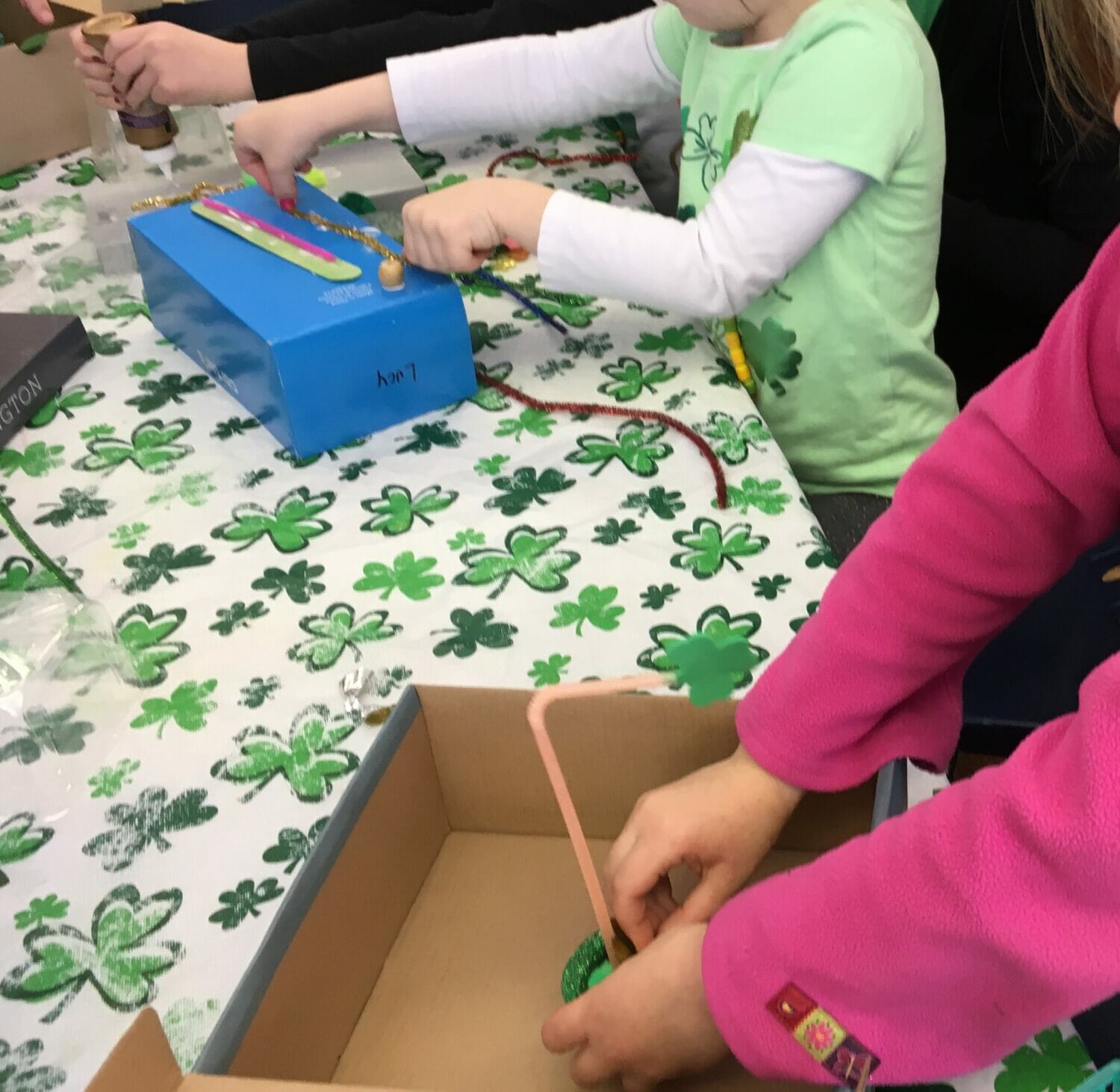 What you’ll need to make a leprechaun trap:

The only must-have is some type of box or container. A shoebox works great for this, and is what my girls always used in preschool. But really, any box will do.

In addition to your box/container, you’ll want to gather (or let your child gather) other items from at least one of these categories (or more, if you prefer):

If you’re not of Irish ancestry (she raises her hand), reading one of these books with your littles will help them get into the spirit of the challenge:

Once you’ve gathered your supplies and read your inspirational story/stories together, let them loose on the materials and see what they come up with!

If sensory tables are already part of your life at home (whether for fun or as part of your homeschooling routine), you may already have your March one set up with all the inspiration your kiddos could need. That’s how the teachers at our girls’ preschool did their March table every year, though they always added the berry baskets and straws on trap-building day. 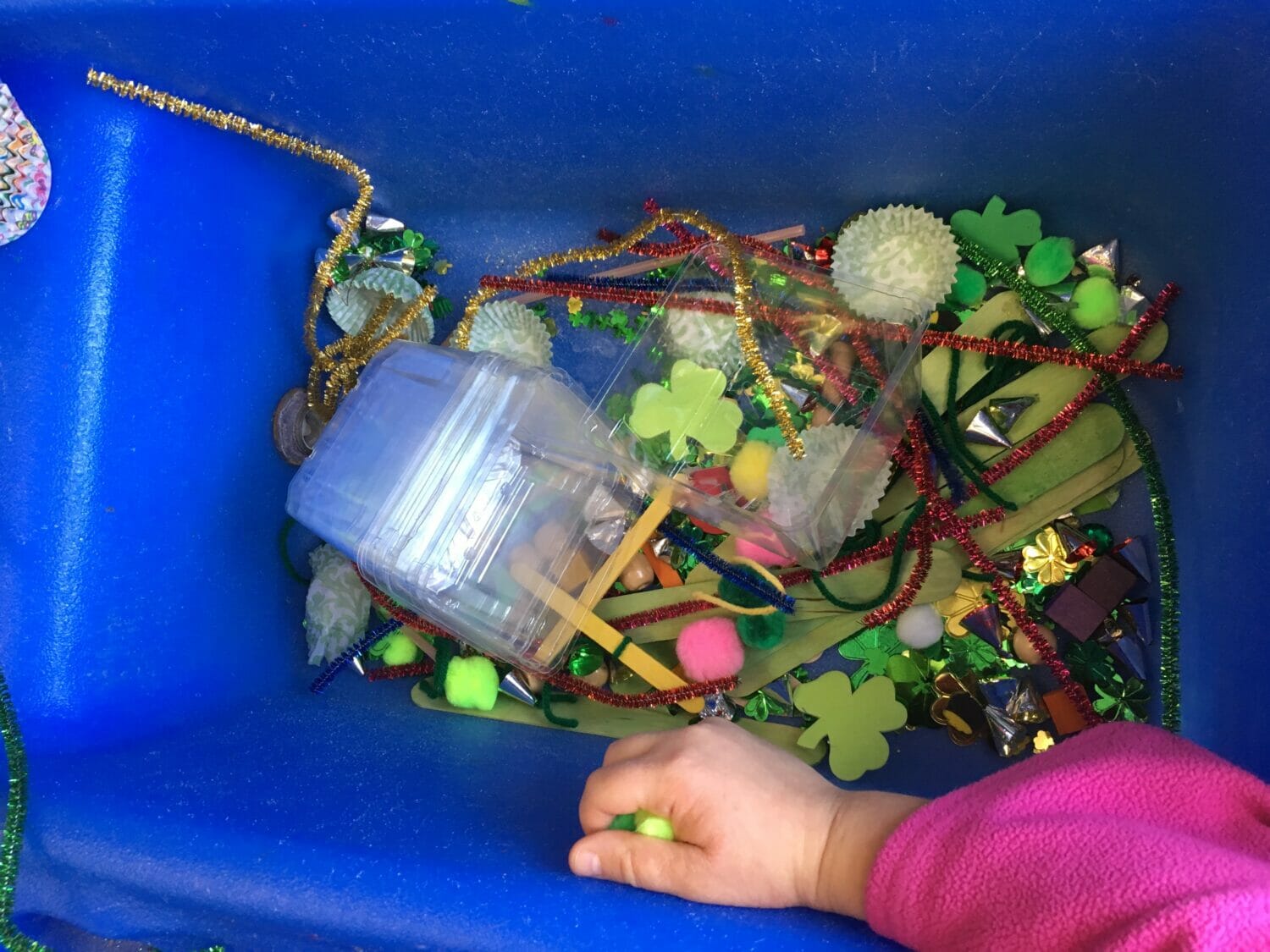 From there, your child’s trap can be as simple or as complicated as they like. Kimmie’s first leprechaun trap was actually an elaborate double trap, designed to hold two leprechauns.

Debriefing you engineers on how their traps are supposed to work:

Unfortunately, I can’t lay my hands on a photograph of the description Kimmie dictated after creating her first-ever leprechaun trap. But the rationale behind her double-leprechaun design went something like this: The traps themselves (the green plastic berry baskets) had pots-of-gold erasers, rainbow erasers, and shamrock confetti inside to attract the leprechauns in through the pink straws, which were one-way entry points. Once they entered through the pink straws, the leprechauns couldn’t escape back through them to the outside world. 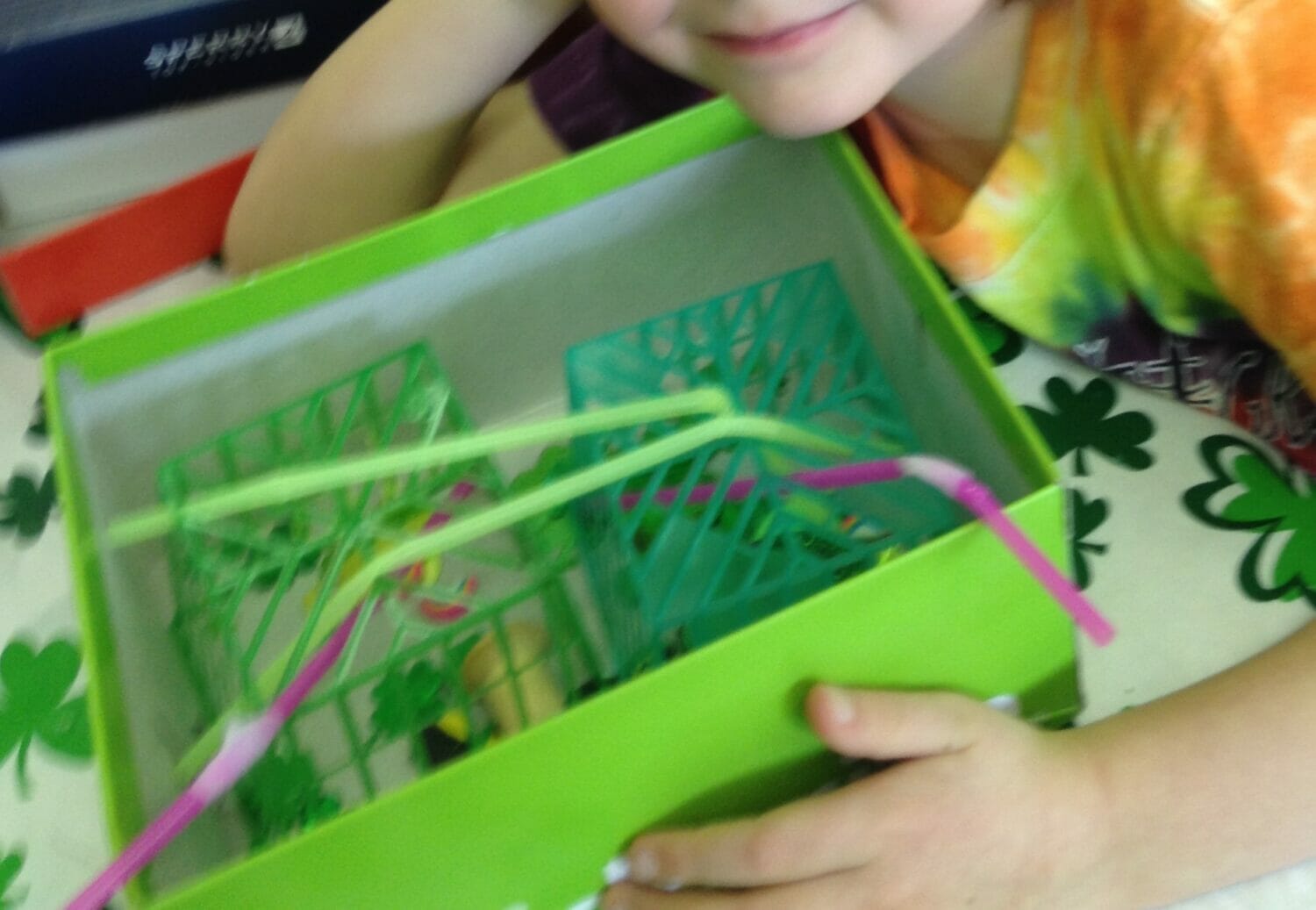 The green straws were supposed to be two-way connectors joining the two traps, so that the leprechauns could get back and forth between them. This was critical, because only ONE of the traps had a toilet, so of course both trapped leprechauns had to be able to “go potty,” should the need arise.

I think the yellow spool in the picture was the toilet. I also think younger sister Essie must have been working hard on toilet-training at the time, since I remember Kimmie being adamant about the importance of this aspect of her design.

When it was Essie’s turn to build her first trap in pre-K, I was surprised that she was done in under five minutes, with a “trap” so bare-bones, I kept thinking she must just be getting started. But no, she insisted her trap was complete.

Her classmates were busy applying elaborate decorative schemes to the outsides of their traps: 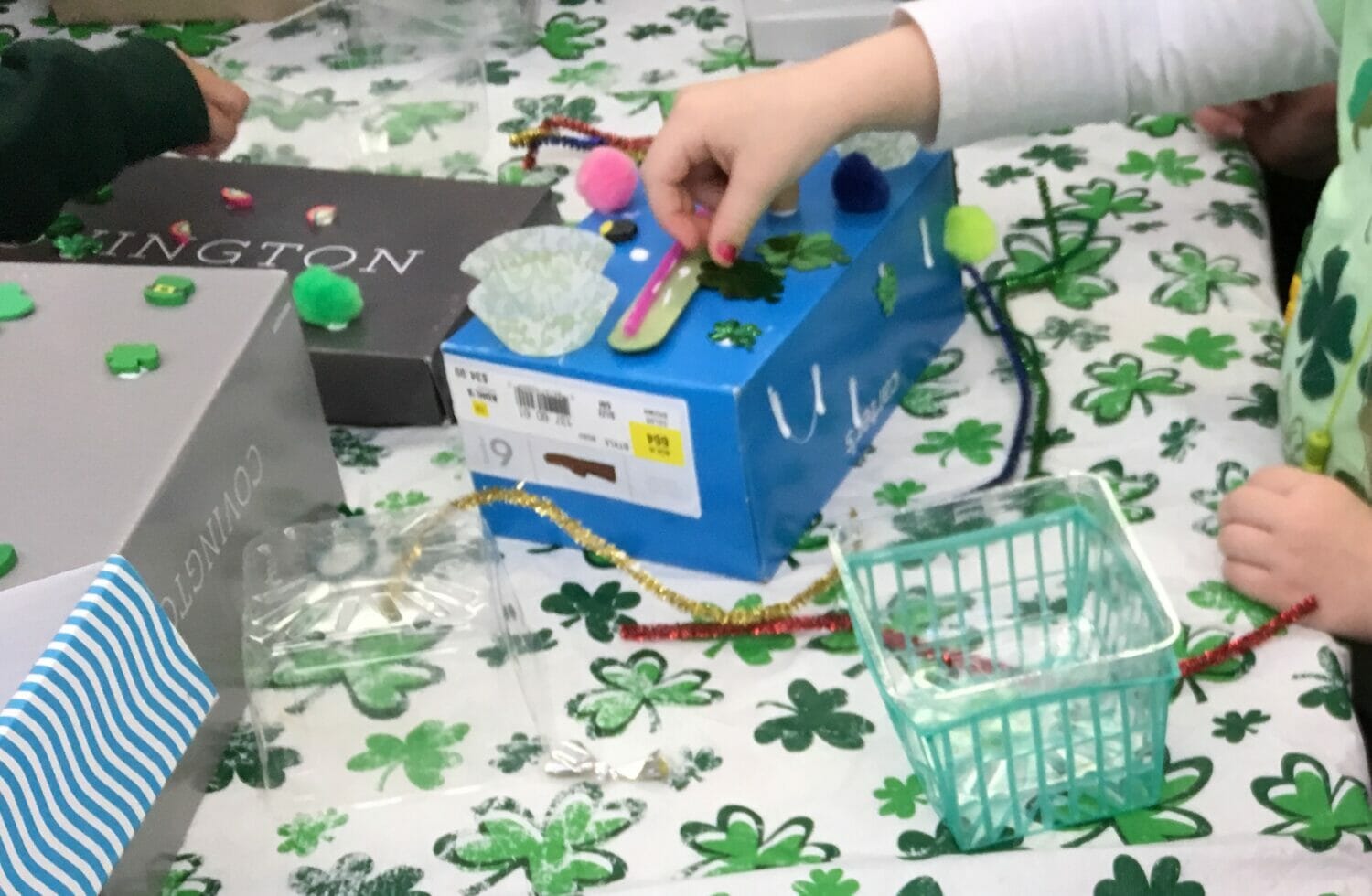 In contrast, this was Essie’s streamlined leprechaun trap design: 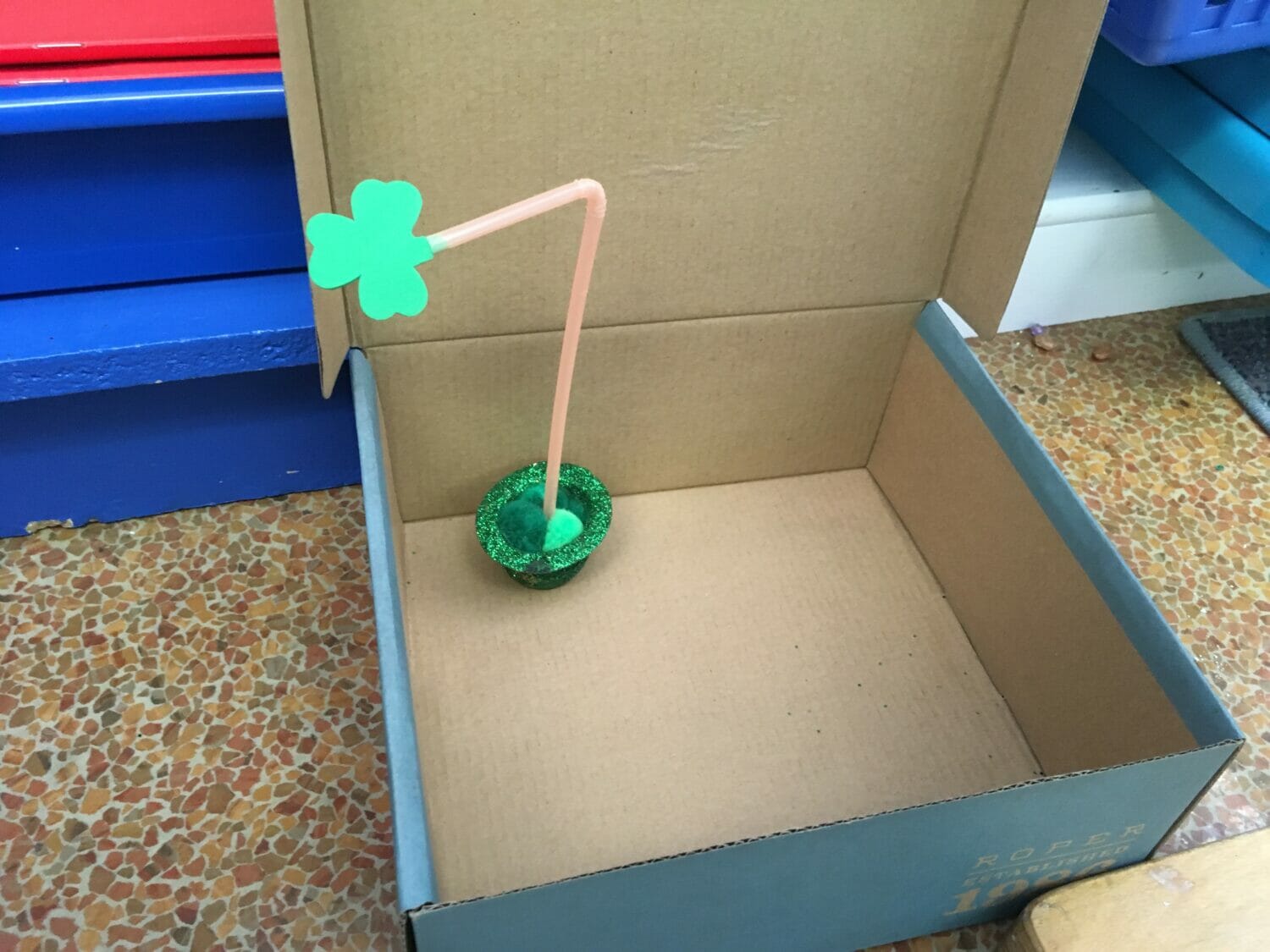 And this, in her own words, is how it was supposed to work:

While this is definitely a fun STEM challenge for preschoolers, it can also work well with kindergarteners and early elementary school students. My girls were so taken with this idea, they insisted on trying to “trap” leprechauns at home for several years after this preschool engineering challenge.

(OK, let’s be honest: Kids measure the season by candy acquired. First there’s Halloween, then candy canes and gelt in December, then Valentine’s Day candy treats, and eventually the Easter Bunny comes. Apparently, the final lesson my girls learned about trapping leprechauns in preschool is that they spring your traps and create a huge mess. But they ALSO leave candy behind, as a consolation prize for your not getting their gold. So my kids keep trying to trap a leprechaun not because they want the gold, but because they want more candy. And I keep humoring them.)

Both the creation and the materials collection was on them – I had nothing to do with these efforts, except for occasionally supplementing their supplies on request.

Their first at-home design was super-simple, and used a round box from Kimmie’s room. They lined the box with plastic bags, and put a rolled-up pair of slipper socks in the bottom: 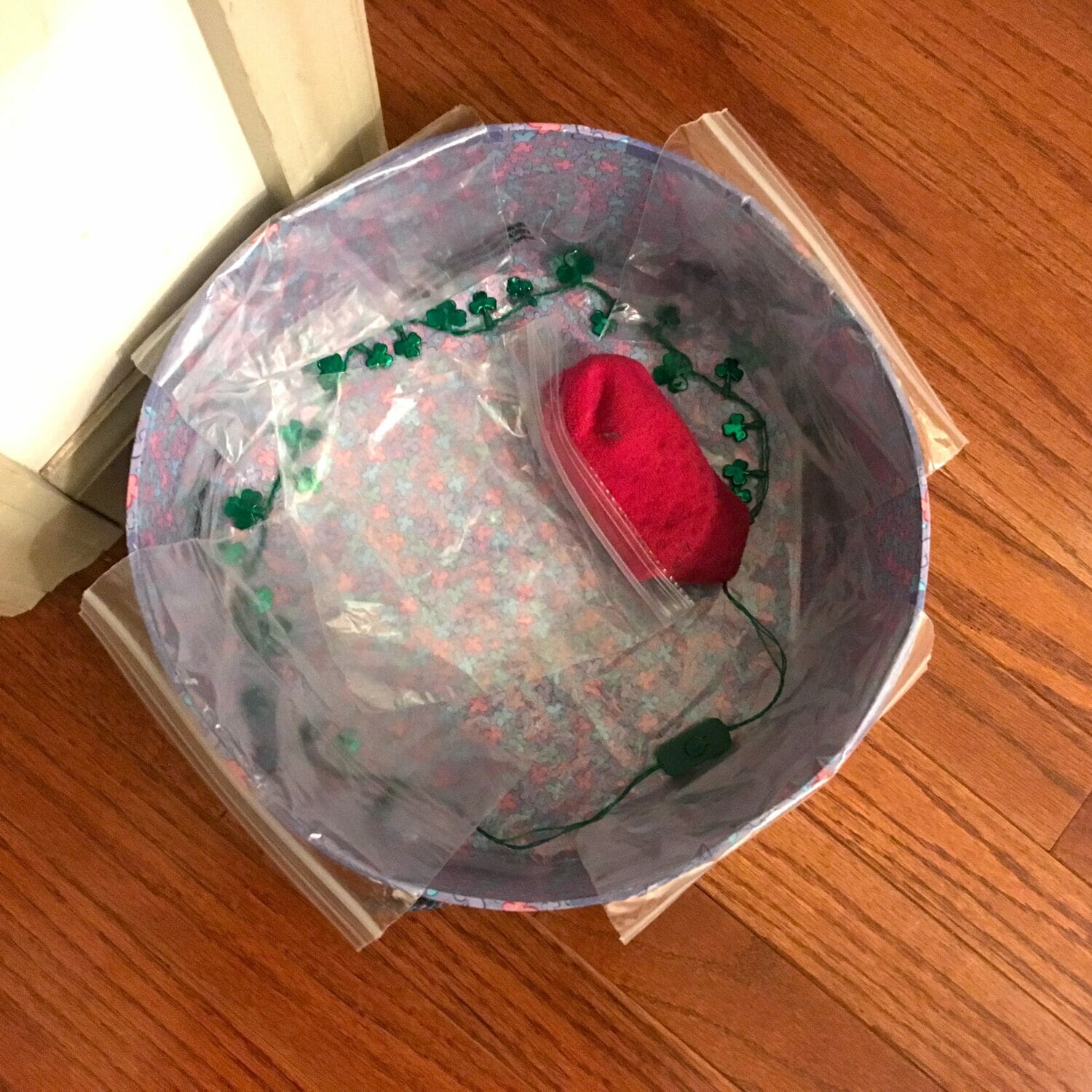 That string of shamrocks you see was actually a light-up necklace that someone gave them. The flashing lights were there to grab the leprechaun’s attention and inspire a closer look. Once he leapt high enough to scale the sides of the box, the plastic bags were supposed to create a slippery surface that would prevent his crawling/jumping back out.

Meanwhile, the ball of socks served as a pillow for when he got tired and wanted to take a nap. My girls are clearly big on creature comforts!

The next time, the girls decided to take things up a few notches. They filled their cardboard box with all sorts of goodies they collected from their bedrooms: a small mirror rimmed with green “gemstones” to grab the leprechaun’s attention, a green cup-plate resting on its storage box to serve as a plate and table, a clamshell for a lounge chair, and even a comfy bed between the table and lounger. The chair pulled up to the green plate/table was the hat from Essie’s preschool trap the previous year, as was the box (!). 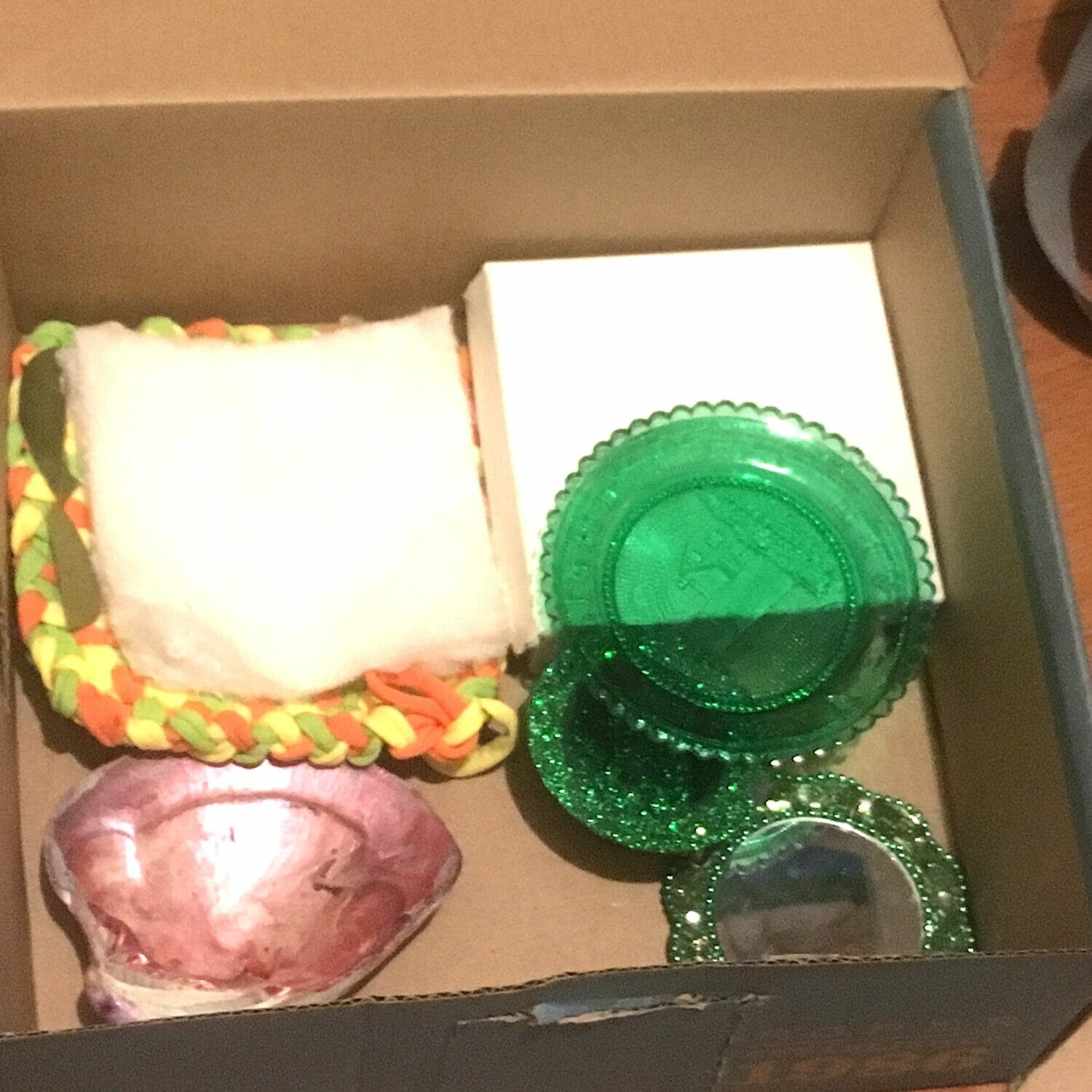 It’s an interesting coincidence that in our household, St. Patrick’s Day always falls around the same time as Girl Scout Cookie sales season. Apparently, this particular year, the girls decided to apply their newfound marketing know-how from all those cookie trainings to their leprechaun-trapping efforts, by putting up this sign a few feet away from their comfortable “trap”: 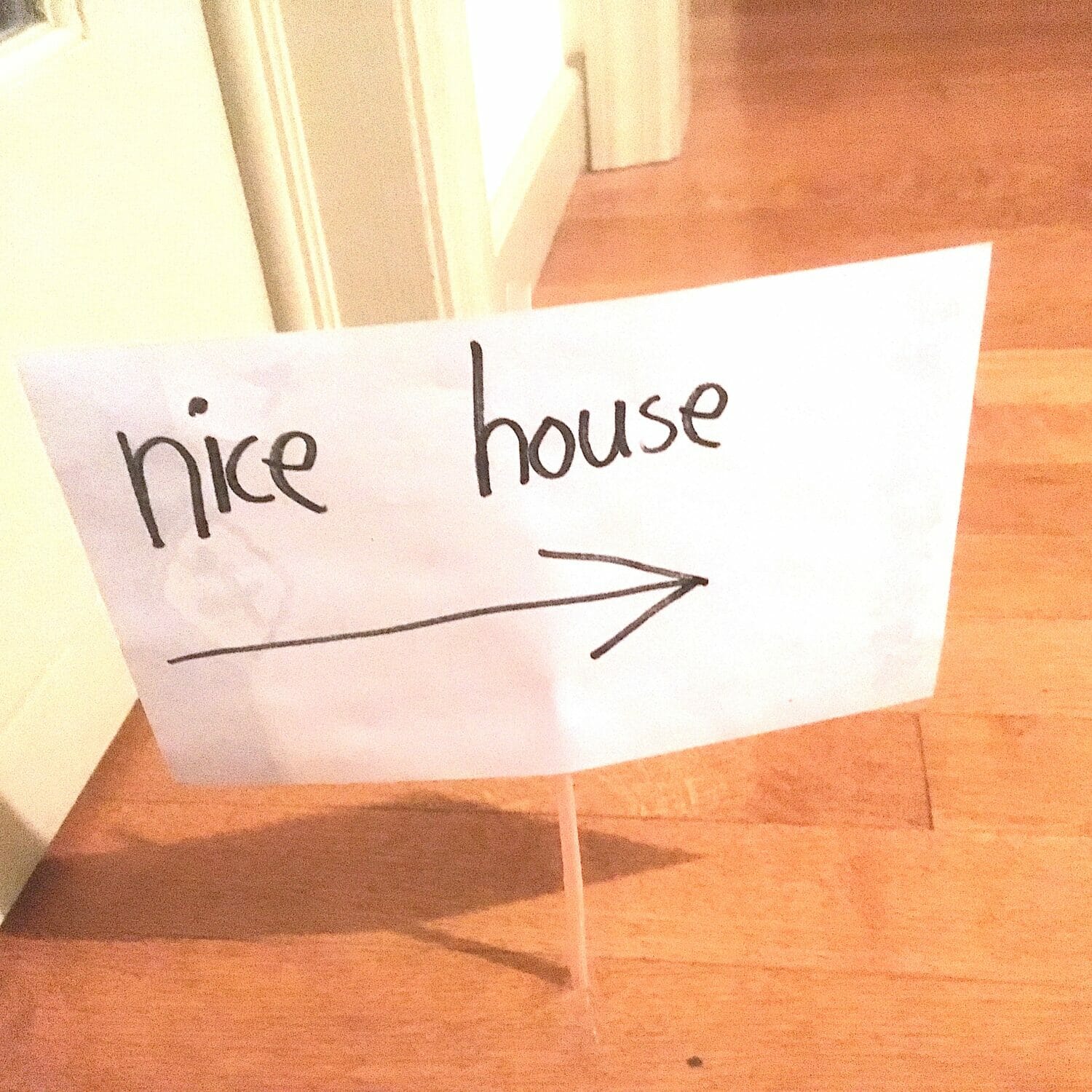 I mean, if you were a leprechaun and you saw a sign bigger than you that said “nice house” with a huge arrow pointing that-a-way, surely you’d go check it out, right?

By the time the following year came around, the girls had earned even more marketing badges during yet another Girl Scout Cookie season, so had even more marketing expertise to display. They fished a box out of the recycling bin and asked if they could raid a jar I keep with scraps of ribbon, yarn, and the like.

And then they put their new gel pens and their marketing expertise to work. This is what they came up with:

This design was supposed to work like a lobster trap. The net over the opening was, again, a one-way passage: drawn in by the slick advertising above the door and the colorful string inside, the leprechauns would pass through the hole in the yellow mesh and enter the “building.” But once inside, they’d be stuck there. 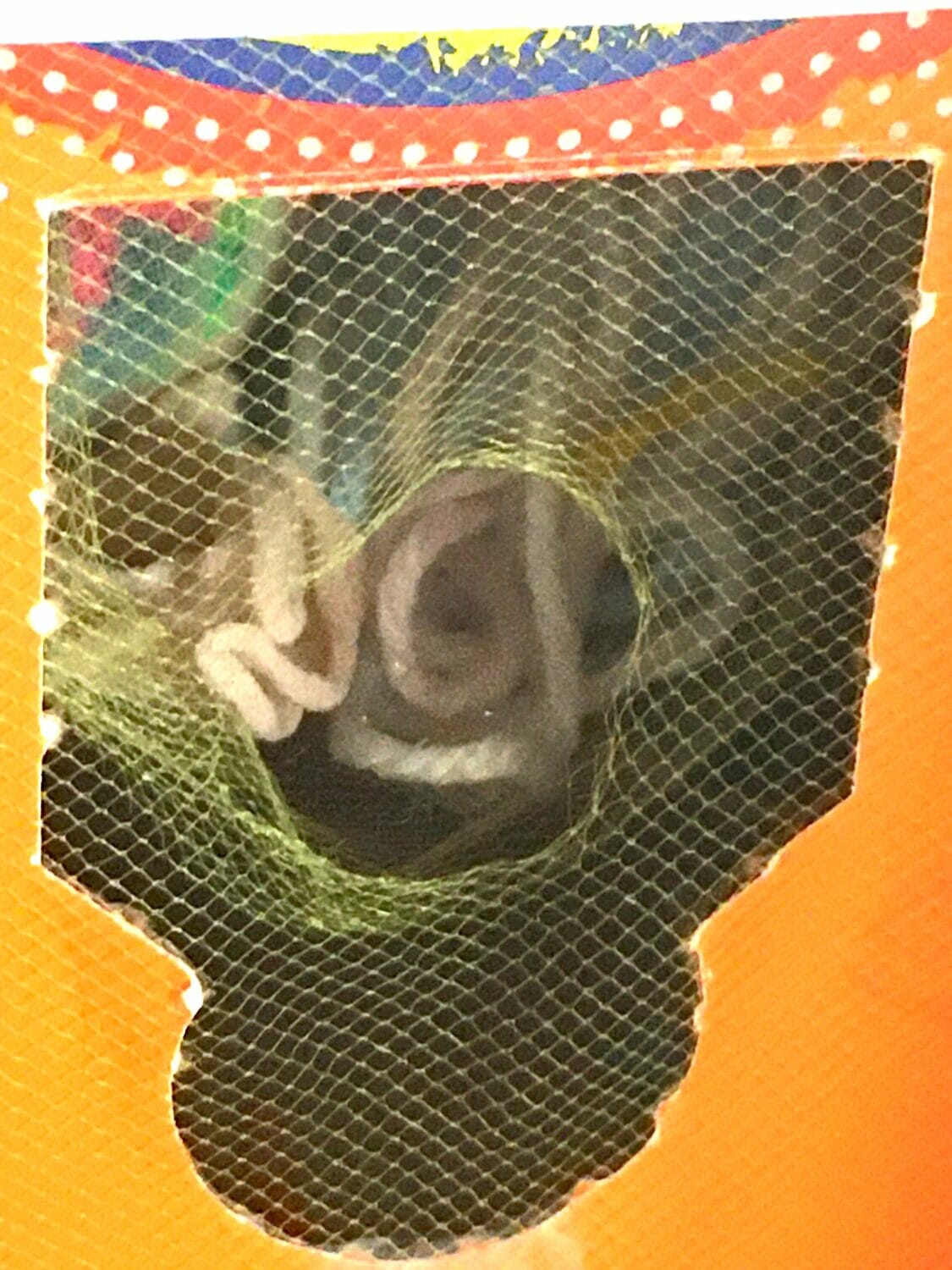 At least they’d be able to play and snooze in the soft, comfortable yarn, which I think the girls saw as a cross between bedding and jungle-gym material.

Postscript: What to do after your kids build their leprechaun traps

In preschool, the kids always “set” their traps out the night before St. Patrick’s Day in the classroom, only to discover the next day that the leprechauns had visited – but resisted being caught. You could tell they’d been there because the classroom was a topsy-turvy mess: supplies in the wrong place, things turned upside down or knocked over, etc.

Also – the kids’ favorite – the leprechauns always “peed” in the toilet. (And then forgot to flush.) And also left little green footprints all over things like the tabletops and other (easily washable) surfaces.

And then the teachers would always have the kids take off their shoes before padding down the hall to the indoor gymnasium or some such. When they’d pad back to the classroom a half-hour later, those crazy leprechauns would have left (individually-wrapped) candy in the kids’ shoes!

True confession: I don’t keep wads of candy lying around the house. And my kiddos’ desire to trap leprechauns on any given year often emerges at the last possible minute on March 16th. So it’s not like Halloween or Easter, when one’s had time to shop accordingly.

Moreover, “trashing” a preschool classroom (and then having sixteen little helpers assist in setting things right again, within ONE room) is one thing. Having my entire house trashed before the kids go to school, and having them take off before there’s time to do much cleaning up, not so much.

So this is how we’ve “tested” leprechaun traps at home instead: 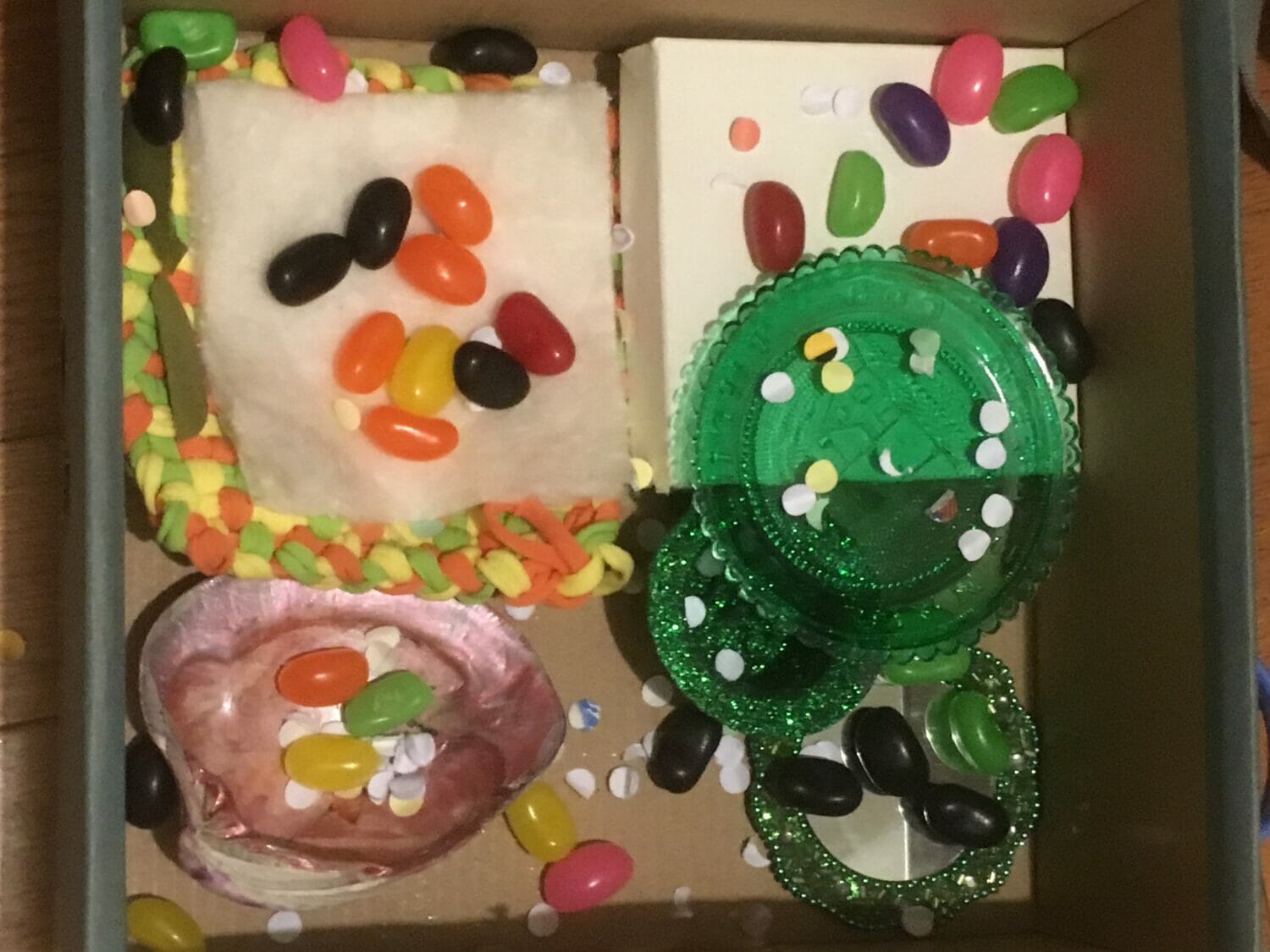 And the joy of their new candy stash far outweighs having to clean up after the leprechauns.

A final warning: While I am not Irish, my husband’s family has a non-trivial amount of Irish ancestry. So my kids can get away with celebrating St. Patrick’s Day on that account. Ditto for setting leprechaun traps at home.

Whether your kids can claim Irish ancestry or not, you might want to caution them that not everyone knows the “secret” of trapping leprechauns (and getting candy in return), or celebrates this tradition at home. Thus it might be advantageous NOT to share this secret with their peers.

Have your kids made leprechaun traps before?

If so, let us know how it went – and what happened when the leprechauns “visited” your house/their classroom and avoided capture – in the comments!

Did you enjoy this tutorial on building leprechaun traps as a fun STEM activity for kids? Then please share by pinning this image! 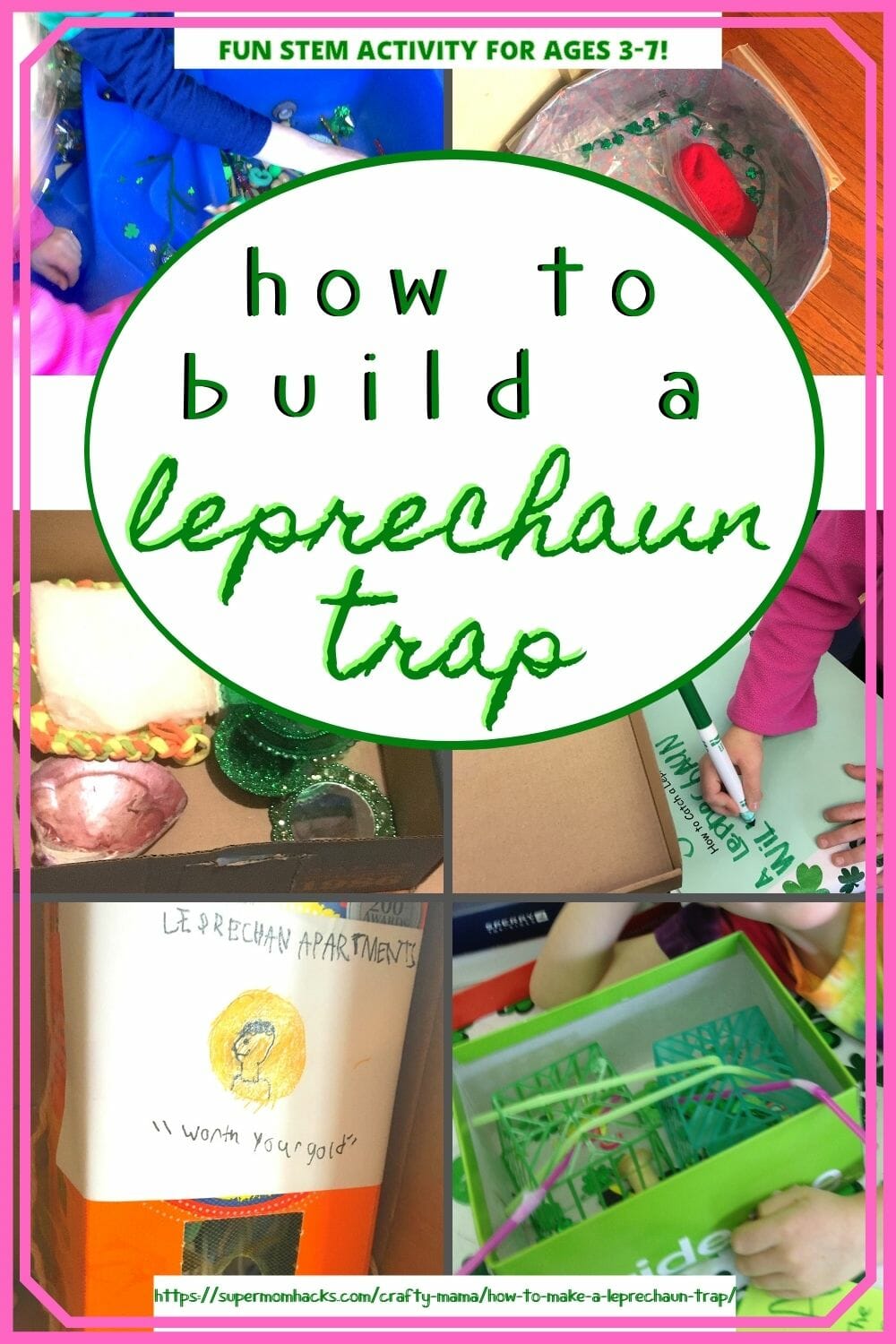