Teach Your Kid To Ride A Bike In One Day? Really? 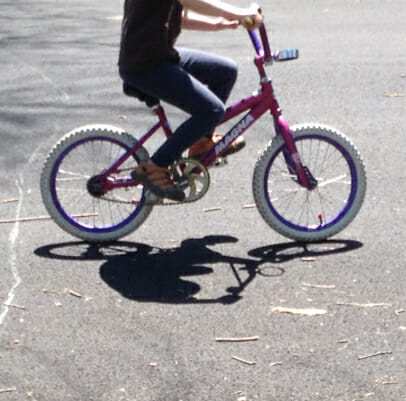 So you want to teach your kid to ride a bike. Maybe you’ve even heard of the “one day” method, and been suspicious – as I was, when I first stumbled across references to it online.

Perhaps you’re wondering, as I did: does it work?

Can you really teach your kid to ride a bike in one day?

Here’s how our family made out.

My dear husband and I LOVE to bicycle. Really. We live for biking season. (In fact, he just stuck his head in my office to say he’s headed out on a quick ride before he goes to work.)

Hence, we made sure that Kimmie and Essie both had tricycles as soon as they could walk, and “big-girl bikes” (with training wheels) as soon as they had the hang of pedaling.

But ditching the training wheels has been a whole other story.

Before I bought their “big-girl bikes” a few consignment events ago, I remember hunting online to try to figure out what size bike each of them needed – and stumbling across all sorts of articles promising to help you teach your kid to ride a bike in a single afternoon. (For examples, see here, here, here, or here.)

I was intrigued by the prospect – and more than a little skeptical.

What happened the day Kimmie’s training wheels came off

Since sometime last year, I’ve encouraged Kimmie to consider ditching the training wheels. She’s wanted no part of it.

So finally, a few weekends ago – the first gorgeous Friday afternoon we’ve seen since last fall – I decided it was high time for our six-year-old to get on with this already.

I did a web search on “teach your kid to ride a bike in one afternoon” to refresh my brain on the recommended techniques. The approach we ultimately followed is the one advocated by a number of bicycling and outdoors specialists – see here, here, here, and here – except that we omitted the grassy slope and the extra step of pedal removal. 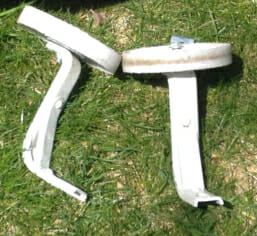 As soon as dear husband got home from work, I delegated removal of the training wheels and lowering of the seat to him. (I have nothing against doing such tasks myself, but after two surgeries, my wrist strength isn’t quite up to such jobs anymore.)

Then I announced to Kimmie that it was time to give this a try – with the plan being that I’d work with her as long as she wanted before taking my own afternoon bike ride, a basic 20-mile loop that I do when I don’t have time to go any further than that.

I never got out on my own ride.

After completing the necessary bike modifications, step #1 of the “teach your kid to ride a bike in one afternoon” method is to get your kid to practice their balance by coasting and scooting.

So for the next half-hour, as I pedaled alongside her, Kimmie shuffled herself up and down our short cul-de-sac, back and forth, back and forth, becoming ever more secure with her sense of balance on her bicycle.

After a half-hour, Kimmie announced – much to my surprise – that she wanted to try pedaling. “Go for it,” I told her. 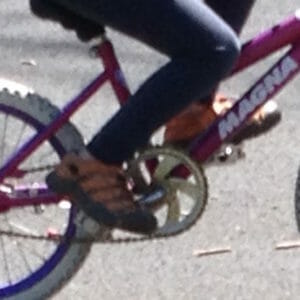 In fifteen minutes or so, she had the hang of basic pedaling. I reminded her that foot-braking was a better way to stop herself than dragging her shoes on the ground, so she added in braking, too.

Then we worked on steering. By now the neighbor kids were home from school and cheering her on, albeit somewhat jealously. One of them began drawing chalk lines on the street as signals for Kimmie to turn. So she began doing large circles along the flattest part of our road.

After awhile, I suggested that she change direction, so she could be confident of turning on both sides. As I continued along with her, she was soon ready to do figure eights, practicing turns in both directions in a single continuous motion.

After about two hours of nearly-continuous biking, she finally quit for the day – not because she was ready to, but because it was time to head inside for supper.

That night she reported that she’d had her “best day ever,” because she finally knew how to ride her bike.

The next day was Saturday, the day when Mama usually “sleeps in” in our house. As I stumbled downstairs at 8:15, Kimmie was already putting on her shoes to head outside.

“What are you doing, Kimmie?” I asked.

“I’m going out to practice riding my bike!”

“Have you had breakfast yet?”

She came in a half-hour later to grab a quick breakfast, then went back out to bike for another hour or so. By afternoon she was on her third stint of “practice” for the day.

The bottom line: For six-year-old Kimmie, our variant of “teach your kid to ride a bike in one afternoon” definitely worked – even though we kept her pedals on, and didn’t make use of a grassy slope.

Even better, she’s now caught the bike-riding bug that infected both her parents long ago.

What happened when we removed Essie’s training wheels 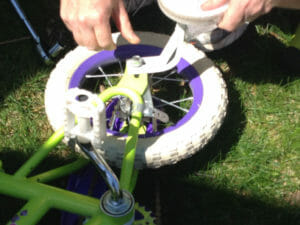 Of course, taking off Kimmie’s training wheels created one big problem in our household: Essie – who considers herself to be Kimmie’s somewhat-smaller “twin” despite the two-plus years between them – wanted HER training wheels off, too.

We listened to her pleas all afternoon Friday and all day Saturday before finally giving in on Sunday afternoon.

Unlike Kimmie, Essie has had the advantage of spending her earliest biking experiences split between her training-wheels bike and a balance bike that I ordered online for her second birthday. While Kimmie had also spent plenty of time on the balance bike, she was much older than Essie when she first tried it.

So even though she was barely four, I figured there was a reasonable chance Essie might have the same success as Kimmie had with learning to bike using the one-afternoon method.

As with Kimmie, Essie then spent the next half-hour practicing her balance on her suddenly training-wheel-less two-wheeler, with the seat lowered so she could easily touch down on both sides with her feet.

Unlike with Kimmie, I wasn’t out there practicing with her. I was inside, working on a deadline with a recently-sprained knee to boot. Daddy was the one outside supervising, doing so at the same time he was trying to squeeze in some yardwork.

I don’t know what made the difference – being two years younger, or being a less obsessive personality type to begin with, or not having a grownup right there doing it along with her – but after a half-hour, Essie was done for the day.

Ever since, she’s continued to work on her “biking” for 15 to 30 minutes at a go. But she’s still not up to the level of coordinated pedaling and turning that Kimmie had down by her first afternoon.

Yes, you CAN teach your kid to ride a bike in a single afternoon. But these methods do not GUARANTEE that result.

Even if your kid thinks he or she is ready for this (as Essie did), there is no promise of complete success.

On the other hand, these methods CAN work for even the most reluctant learner (Kimmie), as long as the stars are otherwise aligned.

As far as overall simplicity, though, I can’t think of a better way to teach your kid to ride a bike.

Have you used a method along these lines to teach your kid how to ride a bike? If not, what worked for your family? Let us know in the comments!