The woman was a friend of my family’s, and my mother’s entire church community is reeling with the news that she is gone and her husband has more broken bones than he can count.

So am I, quite frankly.

Dinah and her husband Eddie are – were – both leaders in their church community. Eddie has been the choir director for decades, and more recently has also taken on the sexton’s duties; Dinah was employed as a social worker for the state. They are – were – what you might call “salt of the earth” kind of people. Dinah is – was – one of the nicest, sweetest women I’ve ever met.

They are – were – both about a decade older than my husband and I are.

They had no children, so that simplifies things a lot – but there are the couple’s cats to deal with. And the fact that the church’s Christmas fundraising festival – their biggest fundraiser of the year – is coming up in a few weeks, and Dinah was in charge of significant portions of it.  And the stuff for all those parts of the fundraiser is stored in their house.

And Eddie is in a hospital bed, near the accident site several hours away from their home.

No one can decide right now, with no children surviving them to make this call and Eddie still in the hospital, when the church can even hold Dinah’s memorial service.

It’s not like I haven’t experienced death before. My last surviving grandparent died when I was in high school, my father passed away when I was in my mid-twenties, and since then I’ve lost more aunts and uncles than I can count without having to stop and think about it. My own children attended their first funeral at ages three and one, respectively.

But Dinah – Dinah was so young, relatively speaking.

And they were just out driving around in their car, for goodness’ sake. Something I, and probably many of you, do most every day.

What if it had been me? Or my husband?

Whether you work or are a stay-at-home parent, the day-to-day minutiae of survival can eat up every waking second, ounce of energy, and functioning brain cell more often than not. 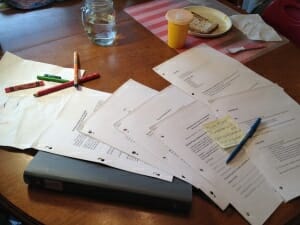 It can be so easy to slide through life, into partnerships (and perhaps marriage, or maybe not), into parenthood, without taking the time to sit down with that life partner – if there is one – and figure out what happens after we’re gone.

That’s what Chanel Reynolds, founder of GetYourShitTogether.org, learned the hard way in 2009 when her husband died in an accident. An accident involving her husband on his bicycle, out on a quick training ride one summer day.

Something my own husband does several times a week, year-round (when he’s not commuting to and from work by bike, which he also does year-round) – and something I also do at least once a week if I can manage it, year-round, if the temperature is above 50 degrees Farenheit. (Despite my time living in cold climates, I’m a wimp when it comes to biking in temps any colder than that.)

Chanel’s story could easily be mine. And Dinah’s death has reminded me that we never know when our time on this earth is up.

What would happen if you were to die tomorrow? What would your spouse or partner have to deal with? Would s/he still have health insurance? (I suspect that Eddie, with months of recovery ahead of him, suddenly found himself uninsured as of the moment Dinah was pronounced dead at the scene.)

What would happen to your kids, if you have any? (Keeping in mind that the laws of your state may care a lot more about your marital status than you and your partner may, which opens a whole other can of worms.) Would they still have health coverage for their various chronic conditions and other medical needs (allergies and severe skin issues in Essie’s case, and we’re pretty lucky), let alone the day-to-day accidents that accompany childhood? (At not quite five, Kimmie hasn’t broken any bones yet; but her often-banged-up knees suggest it’s only a matter of time.)

What if both of you were to die tomorrow? What would happen to your kids then? (Let alone your cats, or your house, or the loose ends you’ve left behind in your community.)

It’s one thing to lose an older relative, someone who’s supposed to die before you in the natural order of things. It’s another thing entirely to experience the death of someone who’s closer to a peer in your mind, especially when it’s sudden and unexpected.

Many of you may find this topic unpleasant to even consider, let alone discuss with those you need to discuss it with. But please, please do it, for the sake of the family members you’ll leave behind if nothing else.

With the holidays coming up, and the opportunities they provide to catch up in person with far-flung family members, there are even more reasons to have these conversations – not just with your spouse or partner, but also with members of your extended family. Have you gotten your siblings’ signatures on the paperwork stating that they agree to be the guardians of your children, if your children wake up as orphans someday? (Discussing it with them, while important, doesn’t count as far as the state is concerned if nothing is in writing.)

And assuming you’re really on top of things and you already have all the paperwork completed and signed and otherwise in order: Does anyone know where to find the most up-to-date copies of your will, your life insurance policies, your living will, important passwords, etc., if something were to happen to both you and your significant other?

Even if you’re only starting at square one, Chanel’s website (which I first learned about when NPR’s Morning Edition interviewed her a year and a half ago) gives you absolutely no excuses, at least for those of you who live in the United States. She’s gathered together a checklist of every single important document you need to at least think about, if not complete with your significant other – and she also has sample blank ones that you can download from her homepage, PLUS tons of tips, instructions, and resources on DIY estate planning! No, you DON’T have to spend hundreds in lawyer’s fees to get together things like wills and powers of attorney!

Her mission in life is to save the rest of us the pain, frustration, stress, and time she spent trying to get her own family’s affairs in order after half of the family-heading partnership was no longer alive.

So if you haven’t yet done this stuff – and I mean, not just talked about it with your spouse or partner, but (especially if you’re not married to the other parent of your offspring) actually filled out the paperwork – please, please, please, for the sake of your children if nothing else, just set aside some time this weekend or next and do it already. And if you have filled everything out, make sure those documents are available to those you’ll leave behind if something should happen to you.

I sincerely hope none of your loved ones ever find themselves in the position of thanking you for taking the time now to make their lives easier later – or at least, not for a very, very long time.