Oh, the ironies of parenting. Not twenty-four hours after publishing my last blog post, on finding your kids’ reset buttons, I found myself mentally running through my own checklist, searching in vain for one of my own tricks that would work on a five-year-old who stubbornly resisted each and every attempt I made to help her adjust her attitude.

(I admit, I forgot to try the outdoors option. Maybe that would have worked. Then again, it was a day of severe thunderstorms and torrential downpours. Which probably had something to do with the need for an attitude adjustment in the first place; nothing like being cooped up indoors on a summer day to cramp a kid’s style.)

At bedtime, as we were reviewing her day, I decided it was time to pull out my parenting equivalent of a nuclear option for eliciting more cooperation: It was time to revisit using a code word.

Last winter, when Kimmie was going through a rough patch, we had conversations at least once a day about how everyone was happier when she was cooperative and did things the first time she was asked, rather than kicking and screaming her resistance at every turn. Being five, she was old enough to talk about things like how Mama and Daddy and Essie feel when Kimmie is uncooperative toward parents and mean toward sister (think hitting and biting), and how in turn she feels when Mama, Daddy, and Essie end up grouchy as a result of Kimmie’s own actions.

Each and every time, these conversations ended with promises for improved behavior tomorrow. To no avail.

In desperation, I decided one day that I needed a better way to remind Kimmie of these promises-made-at-calmer-moments when things got heated. What I came up with was using a code word – a word that Kimmie liked, but that would be totally out of context in the course of daily living – to remind her of those promises to cooperate. 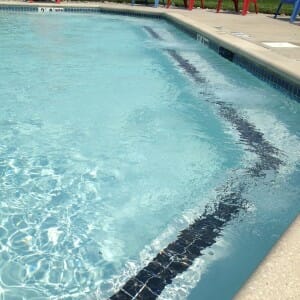 It being January, the word (OK, two-word phrase) we settled on was “swimming pool.”

Kimmie and Essie love going to a pool to cool off in the summer, when we have the chance, but it’s definitely not a word that would come up in ordinary conversation in the middle of January. So the next day, when Kimmie’s obstinate evil twin reared her ugly head, I leveled her a cool look and calmly said, “Swimming pool.”

Instantly, she stopped what she was doing, gave me a scowl, and – albeit with much drama – began to cooperate.

I was amazed to see this theory in action. Do you ever have moments when you can read exactly what’s going on in your child’s mind? Well, for me, this was one of those moments.

It was clear that the code word had worked exactly as I’d hoped: It reminded her in an instant of her promises, made the night before when her mood was calmer and we were snuggling together on her bed, to be Cooperative Kimmie the next day, instead of being contrary at every turn.

I had to say “swimming pool” two more times that day. At bedtime we reviewed how Mama’s experiment had gone.

Kimmie agreed that it was useful to have this sort of gentle reminder of how she’d agreed to behave, rather than my getting upset or cajoling her (or even using the Calm Mommy voice, which still works sometimes but had not been successful during this particular stretch of long, dark winter).

So we added an incentive to the program: For each day she could go to bed without having a grownup say “swimming pool” to her, she would get a sticker on the calendar hanging on her bedroom wall.

By the time we both forgot about swimming pools and stickers a few weeks later, she was over whatever had been going on inside her mind, that made her want to lash out every time a family member tried to interact with her.

I won’t say that using a code word has completely gotten her beyond her current bouts of summertime stubbornness, but reviving this parenting trick has definitely been helpful. It being summertime, though – and swimming pools being a topic of daily conversation, given that the girls are taking swimming lessons this summer – we had to find a different code word.

Kimmie’s summertime choice? “Snowman.” Having apparently inherited my plan-ahead gene, she has also selected code words to be used in autumn (Easter Egg) and spring (Jack-o-Lantern), should the need arise.

I hope it won’t. But let’s be realistic; my kids have bad days, just like I do.
Maybe we won’t have any snowmans today. If so, I should dig out those star stickers at bedtime.