Yesterday morning, Halloween, was a prime example of One Of Those Days. Don’t get me wrong – it had its moments that were perfect enough for a Hallmark card. Like when I giddily returned home a few minutes before 7 a.m., exhausted and sweat-soaked but on a temporary high after having dragged myself out of bed for a 5:45 spin class. Or when, suspicious of the silence in the living room, I investigated – and discovered the girls on the floor, in front of the doodle board

, with four-year-old Kimmie trying to teach two-year-old Essie how to play tic-tac-toe.

But those sweet occasions were offset by the chaos of folding clothes in one pile while kiddos unfolded them in another; of trying to wrestle something away from Kimmie (I don’t even remember what) while Essie used the distraction to scribble on the walls; and of constantly finding that what I needed to get done was on a different floor of the house than at least one of them.

Around 9am, I finally gave up on trying to get Kimmie to eat her breakfast, and headed upstairs with Essie in tow, having left a banana and a bowl of dry cereal at Kimmie’s place at the table. When I checked on her a short while later, I found Kimmie staring at what was left of her cereal. Apparently she’d used my absence to see what happens if you dump several tablespoons of salt on your breakfast.

“So, you poured salt all over your cereal, huh?”
“Yeah.”
“Do you think that was a good idea?”
“No.”
When I asked her how it tasted, as she picked another piece out of the salt pile, she said, “Yucky.” When I asked her if she thought she’d ever be tempted to pour that much salt on her breakfast (or anything else) again, she was quick to answer “Noooooo!”

You can tell someone over and over again that something isn’t a good idea, but sometimes they just have to figure it out for themselves. The hard way. 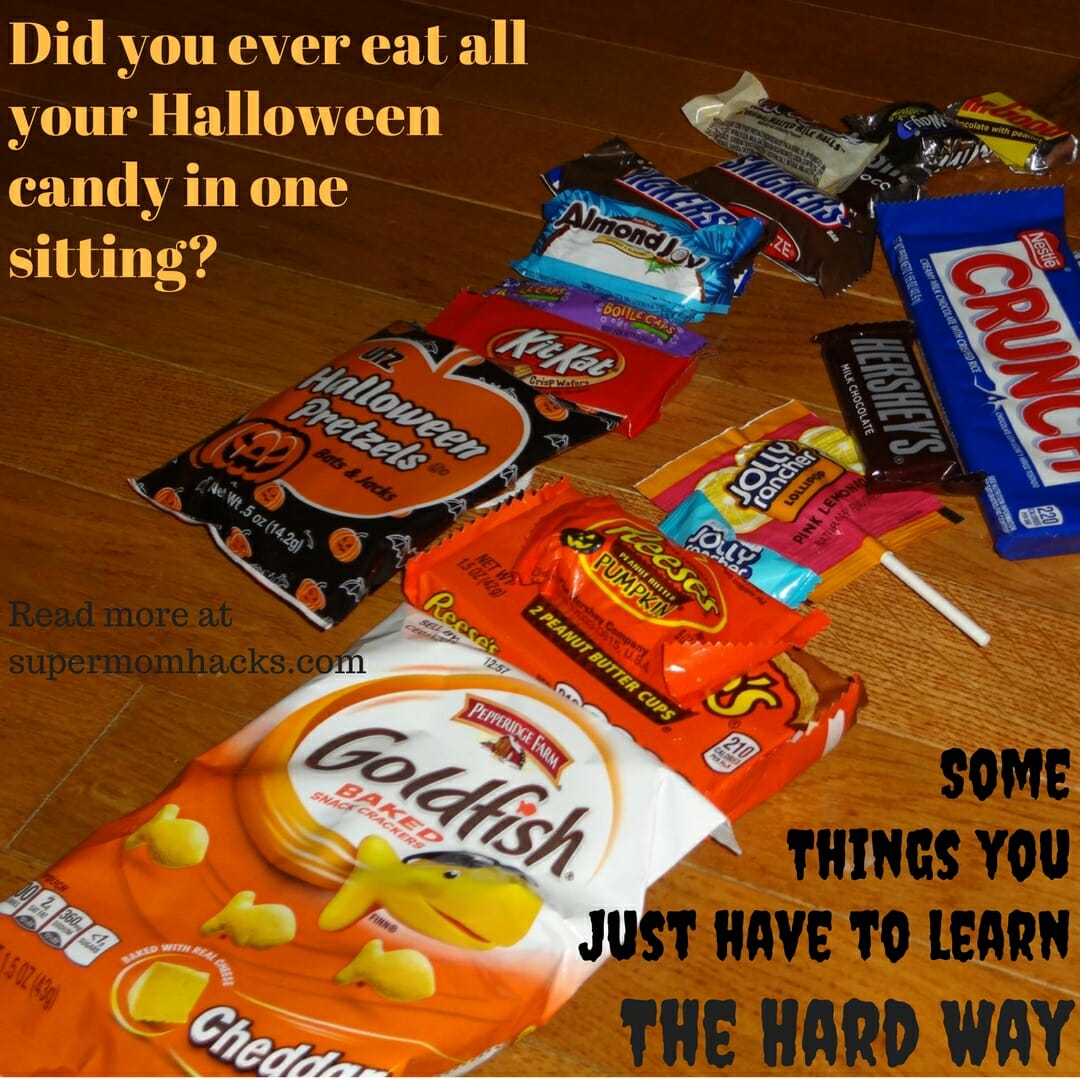 I’m one of those people who often has to learn things the hard way. At least two or three times – once usually isn’t enough for me. So far, though, none of us is suffering any ill effects from my latest effort to teach us all a lesson.

What too much Halloween candy has to do with learning things the hard way:

The day before Halloween, I found myself with two kids who had already amassed a fair bit of Halloween loot, between trunk-or-treating at church and a trick-or-treating event we stumbled across one weekend in mid-October at a museum. Having apparently forgotten that I only operate at human speed, after lunch each of my offspring asked about four times for a piece of candy from the stash. That is, four times in the course of about ten seconds, without pausing for breath between requests.

Since they had eaten a healthy, well-balanced lunch (the prerequisite in our house for having a piece of candy), and since they had also remembered the mandatory “please” in their requests, I owed them each a piece of candy according to the rules of our household. But the rapid-fire string of repeated requests, coming on the heels of so many earlier in the day before those conditions had been met, really irked me.

So I did something that totally clashed with everything I’ve ever been taught about what constitutes being a Good Mother: I dumped the contents of each of their bags in front of them, separated out the Halloween pencils and toy spiders and other non-candy items, and told them to have fun with the rest. In other words, they could eat as much as they wanted.

About two dozen pieces of candy (a dozen apiece) later, I told them that they did not have to eat every single piece then and there if they didn’t want to; they could save some for later. I might as well have been shouting upwind in a hurricane.

Since lollipops take so long to eat, I finally convinced the girls to stop when they were each down to nothing left but a few Dum-Dums, which are not as rare a commodity in my house as I might wish. (Since when does every bank teller and grocery-store pharmacist hand out lollipops? Maybe it’s just something specific to this part of the country, but I now try to avoid these errands when the girls are in the car, lest they start clamoring for lollipops). Hence they are not as closely associated with Halloween around here as pure chocolate, or pure sugar-in-non-lollipop-form.

The aftereffects of all that candy

The period of time immediately after The Candy Binge reminds me a little of when we used to feed catnip to my mom’s three cats on Christmas Day. “Go crazy!” is the response you’d expect, but actual results varied from one cat to the next. We only had one cat who got really silly and nutso; the second ran around like a maniac for a little while, burning off endless energy, while the third just got really mellow and sleepy.

Having been raised in a household where (far as I can recall) candy was carefully rationed, doled out only after balanced meals had been consumed, I was raised to believe that ODing on candy would lead to an extreme sugar rush, possibly culminating in spontaneous explosion, or at least a fearsome tummyache. None of these things happened. Instead, Kimmie resembled Cat #2 above, while Essie was more akin to Cat #3.

“OK, who wants to go run around outside and burn off some energy?” I enthusiastically offered. Kimmie was game, but Essie announced – of all things – that she was sleepy! So while Kimmie went outside and ran her balance bike

furiously up and down the driveway for five minutes, I attempted to interest Essie in the puzzle she’d pulled out earlier in the day, while she listlessly mixed up the pieces again as I sorted and piled them.

Much to my amazement, the girls didn’t explode. Nor did they groan for the rest of the day about how much their bellies hurt. Nor were they too wired to go to bed some five hours after their sugar binge. In fact, the only physiological side effect I noticed was that their appetite for supper, approximately three hours post-binge, was almost zero.

Fast-forward to yesterday – a somewhat challenging day, as I’ve already mentioned. More than once, the girls asked for a piece of Halloween candy, which I chose to interpret as candy of the non-lollipop variety. Each time, I reminded them with a smile that they’d depleted their respective piles of candy the day before in one fell swoop.

This wasn’t the “lesson” I was most hoping to teach them from their overindulgence. To be honest, I think a tiny part of me hoped that they would feel some physical side effects, just like any adult would after too much alcohol, ice cream, all-night partying, or exercise (yes, there is such a thing as too much of a good thing). Nonetheless, I also like to think that hearing the same message several times over the course of the day might have started to resonate with them, in a Deeper Life Lessons sort of way.

Every day in life, we are faced with choices. No matter which choice we make, choices have consequences, both good and bad. Making the choice means accepting the consequences.

Or, as my best friend Raiah put it about a decade ago, when we were both single and childless, “Yes, you can eat popcorn and cheese for supper as a grown-up, but there are a lot of trade-offs.”

So. It’s the day after Halloween. How many of you have a house full of Halloween candy? What will ultimately happen to that candy?

I’m not advocating one path over the others, since I’ve now been on at least one side of each of these scenarios. But I’m glad that something useful may have come out of letting the girls eat a truly unhealthy amount all at once, and even more glad that no upchucking went into the learning of this lesson.

I like to think I’m the kind of parent who lets her kids make their own mistakes and learn from them, in a structured environment where I’m there to give guidance – rather than a parent who protects them from every opportunity to make a tough decision or fail spectacularly when the stakes are low, only to have them mess up in a much bigger way when they’re on their own because they can’t think through the consequences of their choices.

And deep down, I’m especially glad that there are fewer candy leftovers around the house for me to be tempted to eat.

What about you and yours? Are you candy-bingers, or do you savor Halloween treats one at a time? (Or does your family switch out the candy for other treats?)

If you enjoyed this post on learning things the hard way, why not share it with others by pinning this image? 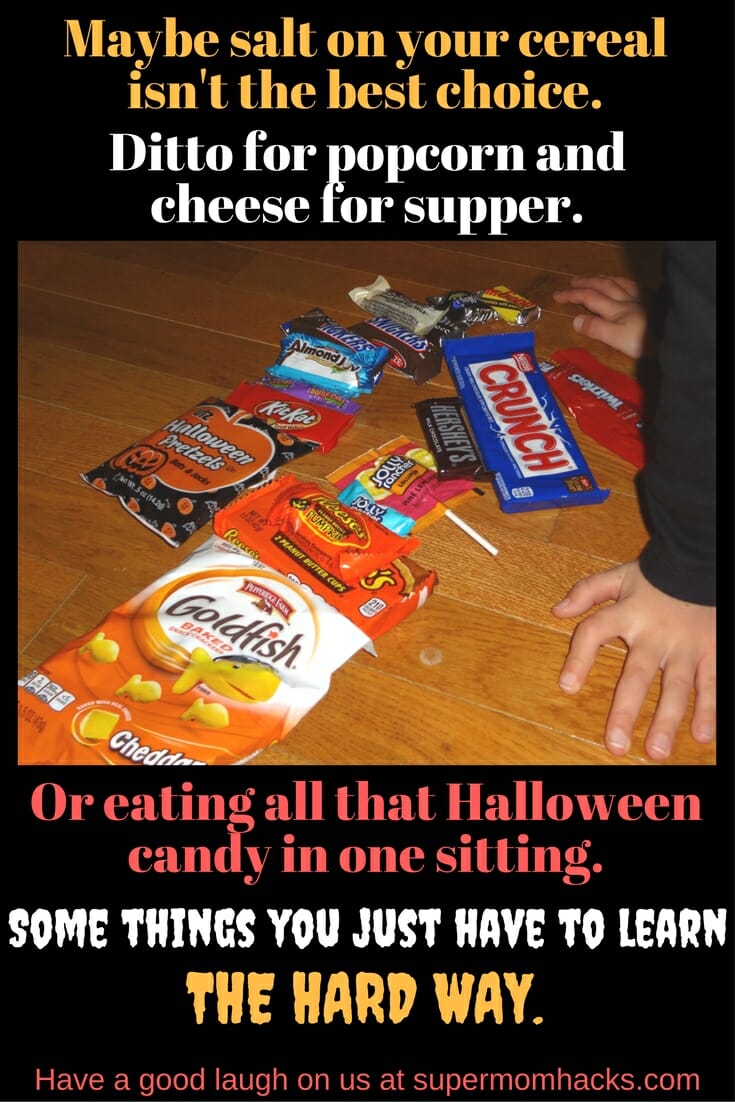 NOTE: This post contains affiliate links. If you like what you’ve read here, please consider clicking on the links. All purchases made through affiliate links help to offset the costs of running this website. Thanks in advance for your support!